Author Ernest Cline is preparing to log back in to the OASIS for Ready Player Two. He revealed the synopsis to his anticipated Ready Player One followup during a virtual panel for New York Comic Con Friday, sharing that the new book begins just days after Ready Player One ends, and sees Wade Watts discover a technological advancement that makes OASIS “a thousand times more wondrous — and addictive” than Wade ever imaged. 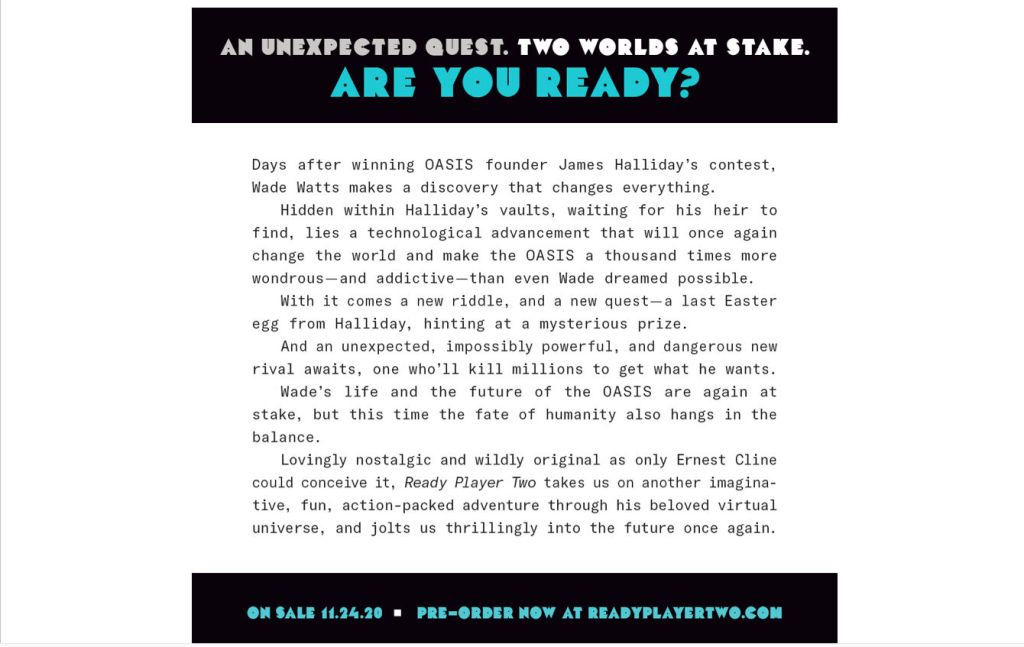 Cline’s Ready Player Two is in stores in the U.S. and U.K. Nov. 24, followed by publication in more than 50 countries. It is available for pre-order. An audiobook, narrated by Wheaton, is also forthcoming.

At a New York Comic Con virtual panel Friday, Cline spoke of how time in his life before Ready Player One influenced his writing. He grew up in a trailer park where his bed was on top of the dryer, and later working tech support — things that he all put into the book. They were experiences that were challenging, but necessary, for his growth.

“If I hadn’t had those experiences, I never would have been able to write the book,” said Cline. “Something I share with writers who feel like they aren’t doing what they want to be doing is to draw on whatever is happening in your life because those are the experiences that can help you change your life. Maybe you’re having those experiences for a reason.”

Ready Player Two, from Penguin Random House, follows 2011’s Ready Player One, which takes place in 2045, a time in which climate change, overpopulation and poverty have swept the Earth. Much of humanity seeks solace in an online virtual reality called The OASIS, created by 1980s-obsessed genius James Halliday. The plot sees teenager Wade Watts dedicate himself to solving Anorak’s Game, an OASIS-spanning treasure hunt announced after Halliday’s death and which sees the winner get his $500 billion fortune, as well as control of The OASIS.

It was a big hit, spending more than 100 weeks on the New York Times bestseller list and spawning the 2018 film adaptation from Steven Spielberg, with Cline co-writing the screenplay with Zack Penn.

Cline is preparing to go on a virtual book tour for Ready Player Two, and noted that despite the tough times of the current pandemic, perhaps some positives can be found.

“All these artists and creative people in quarantine are going to create a bunch of art that is going to change the world,” Cline said. “That’s what art is, it’s making something beautiful out of the negative parts of life. That’s what I was trying to do with Ready Player One and Ready Player Two.”