There has been a lot of debate regarding the content of Red Sparrow. Is it a daring tale of female empowerment in the face of misogynistic oppression? Or is it an exploitative reinforcement of misogynistic stereotypes and tired tropes masquerading as “feminism”? Personally, I feel a lot of the concepts involved in Red Sparrow — women using sexuality as a weapon against men; women being able to control how men react to their bodies as some kind of pseudo-superpower — are too fundamentally intertwined with arguments that have been used to dismiss, demonize and destroy women for hundreds of years, from witch trials in early modern Europe to the modern-day victim-blaming of rape survivors, to ever be clean of that taint. But trying to say that art cannot or should not go to certain places in content is a slippery slope that can very easily fall into the realm of censorship, where art goes to die. So I’m not going to go there. Instead of content, I’m going to address form, because while I find the content of Red Sparrow personally distasteful, it’s in how the film chooses to depict this content that is truly the problem.

A defining feature of cinema — one of the things that sent early filmmakers running toward the medium while skeptics still saw it is as a passing fad — is the amount of control it offers filmmakers in deciding exactly what a viewer sees. Even Dickensian description conjures different images in the minds of different readers, and the most skilled theater director cannot truly control what part of the stage an audience member focuses on at any given moment.

A filmmaker gets to decide exactly what the audience sees and how they see it. It didn’t take early filmmakers long to discover that particular ways of showing things — or not showing things — could be used to elicit particular thoughts and feelings. Show an actor’s face and then a grave, and viewers will see grief. Show the exact same face but followed by a bowl of soup, and they will see hunger. High angle shots can be used to make subjects appear weak and vulnerable, low angle shots to make them looming and powerful.

Red Sparrow is full of violence. Rape, torture, murder. And while the content does not exclude men from the action, the form does in a major way. When it comes to displaying men being humiliated or brutalized, the film shows a sense of discretion it utterly lacks with its female characters. With the female form it leers. We get a scene of a man’s sexual “humiliation,” which insists on leaving him fully clothed while Dominika (Jennifer Lawrence) is nude, the camera seemingly determined to keep at least one breast visible at all times. The camera similarly lingers on Dominika’s grotesquely broken leg, the corpse of a mutilated woman in a bathtub, the explicitly nude body of another woman as she is repeatedly bashed with a blunt object. Neither she nor her male partner had seen their attacker creep up behind them in the shower, but while the man is dealt with in a brief blur that gets the job done but leaves his dignity relatively intact, her beating goes on. And on.

Compare: A man, sporting bruises from torture sessions the film leaves to the audience’s imagination, dies from a clean sniper shot at a distance in the night. It’s quick and too dark to see the gore. Another man’s violent death is shown in the black-and-white of surveillance tape footage, small and contained within a laptop screen.

The closest we see a woman’s death to getting such a restrained treatment is the case of one female character who gets plowed into by a van going at an absurdly fast speed for city driving. 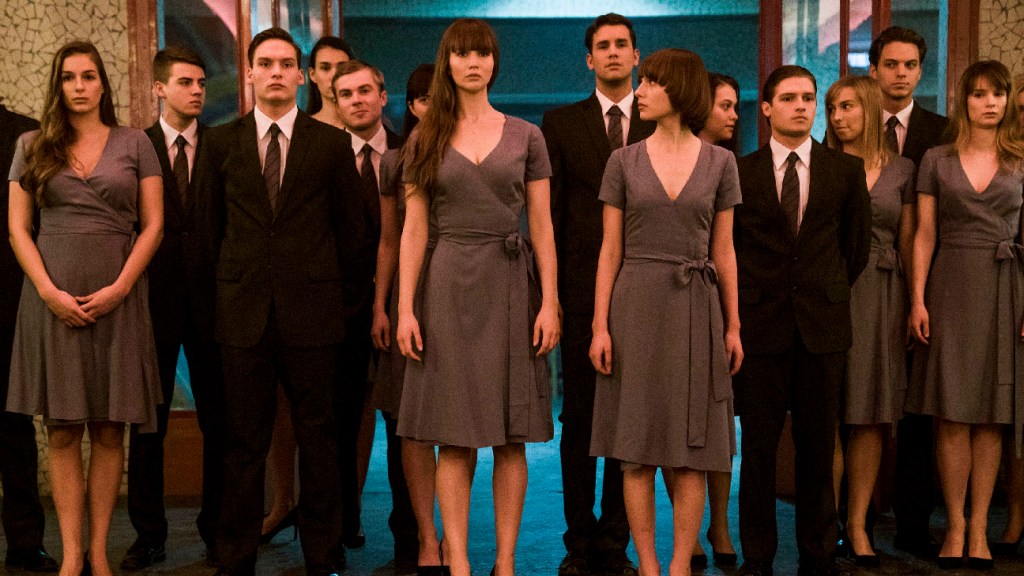 There has been a lot of talk about the power of representation, about how much it means to see people — and not just any people, but heroes — who look like you, blazoned larger than life on a screen. It’s not that viewers can’t identify with characters across lines of race or sex or age or anything else — they can and quite often do. But fewer lines to cross make it far easier, and the easier it is, the more their triumphs feel like your triumphs — and their defeats your defeats. And this gets at the heart of why Red Sparrow‘s lopsided portrayals of violence and humiliation are such an issue.

Red Sparrow is not just primarily about the torture of women — emotional, physical, psychological — it is a film that is more torturous to watch as a woman.

But perhaps you’re not convinced yet, so let me bring up the exception that proves the rule. Compared to the numerous acts of humiliation and torture of women explicitly depicted in the film that are fundamentally dependent on the victim’s femininity, there is exactly one act of violence against a man in the film that is specific to the victim being male. During this scene, the men sitting in the row in front of me visibly flinched. While I found the scene disturbing, my reaction was far less visceral. As an act of violence specific to a male body, it was somewhat abstracted to me, exactly the way the uniquely female violence throughout the film is not.

Regardless of your stance on the content of Red Sparrow, it’s clearly trying to make some sort of statement about female empowerment. On the level of form, it is a film that, due to how it chooses to so often and repeatedly linger on explicit forms of humiliation and torture specific to a female body, is especially painful to watch because I am a woman and those bodies being explicitly violated and mutilated and broken are like mine. And that is not empowering.

Ciara Wardlow is a Wellesley College student double-majoring in Cinema and Media Studies as well as Biological Sciences.