The sleazy Cold War-era thriller Red Sparrow may be an adaptation of Jack Matthews’ 2013 source novel, the first in a trilogy about Russian ballerina-turned-spy Dominika Egorova (played by Jennifer Lawrence). But director Francis Lawrence (The Hunger Games: Mockingjay — Parts 1 and 2, I Am Legend) and screenwriter Justin Haythe’s film version also feels like a retrograde throwback in more than superficial ways.

True, Red Sparrow is initially appealing for its overripe and kind of trashy-fun exploitation of Lawrence’s sex appeal, as well as its general Paul Verhoeven-level raunchiness. But that’s only true until a rather ugly rape attempt that’s supposed to leave our heroine looking quasi-empowered. And two scenes of torture, one of which that shows off Lawrence’s ass while she’s trussed up and beaten. By this point, Red Sparrow feels like the kind of feel-bad trash that the executives at exploitation-friendly studios Carolco or Cannon wish they could have gotten away with back in the 1980s.

There are, admittedly, more contemporary influences on Red Sparrow, starting with last year’s Atomic Blonde, another spy thriller that follows an ass-kicking heroine (Charlize Theron) as she navigates a John le Carre-style series of double and triples crosses, all while barely staying one step ahead of a stellar cast of traitorous fellow spies, all played by character actors. There’s also the strong influence of straight-up le Carre adaptations like Tinker Tailor Soldier Spy (2011) and The Spy Who Came in From the Cold (1965), particularly during Red Sparrow‘s relatively sober negotiation-and-double-cross-intensive back half. And don’t forget La Femme Nikita (1990), another movie about a reluctant killer who tries to escape a male-dominated world that she unwillingly stumbled into, but now reluctantly excels at.

There are also a number of politically ambiguous Cold War-era action films starring European action heroes like Dolph Lundgren (Red Scorpion), Arnold Schwarzenegger (Red Heat), and Jean-Claude Van Damme (Black Eagle). Like Lawrence’s heroine, many of these films’ lead protagonists are praised for their emotionless mastery of their bodies. They are perfect fighting machines, and therefore outwardly appear to be the ideal emissaries of their chilly Mother Russia.

But in almost all of these cases, these leading men are treated like conflicted puppets of an oppressive state. They are, in other words, more anti-heroes than heroes. The perfect example of this type of character is Ivan Drago (Lundgren), the villain of Sylvester Stallone’s 1985 boxing blockbuster Rocky IV. Everybody remembers Drago as the mountainous, stoic boxer who punches Carl Weathers’ Apollo Creed to death. But Drago’s brutality is somewhat contextualized by scenes where he’s shown using advanced weight-training machines and taking steroids. By the film’s end, he comes across as a pitiable accessory to murder, a brutal tool whose misplaced anger is not that different than the anger that John Rambo felt in Rambo: First Blood Part II, Stallone’s other 1985 mega-hit. The main difference between Rambo and Drago is that the latter man is a Frankenstein-like monster, while the former is a tragic hero who gets to bite the hands of the traitorous bureaucratic bosses that used to feed him. 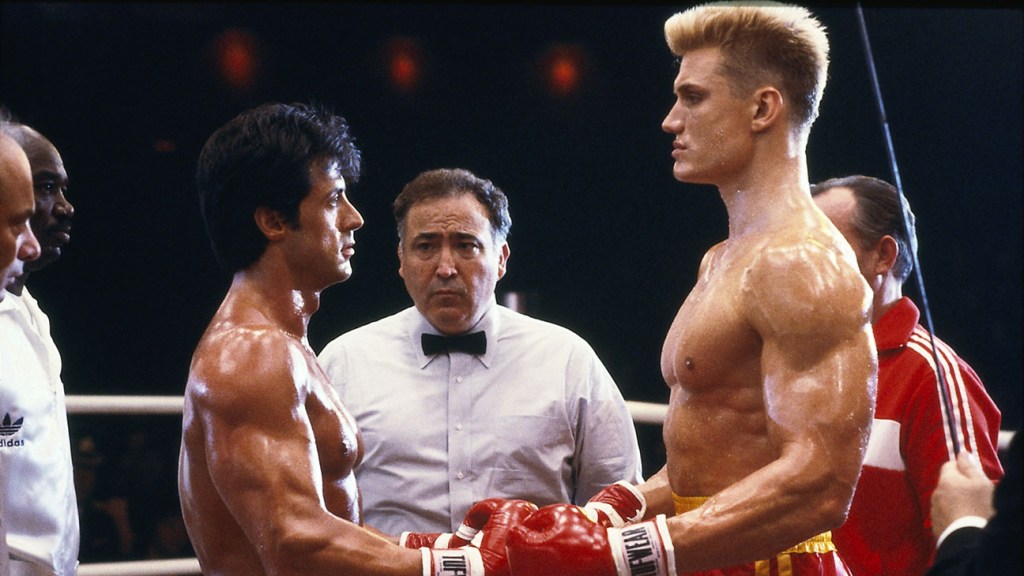 Egorova is a little more like Drago than Rambo, though, since she is not a conflicted patriot who hates the system that made her. Like Drago, Egorova rises through the ranks of a dehumanizing Russian training program. And the greatest source of tension in Red Sparrow comes from Egorova’s tendency of slipping behind an ostensibly emotionless facade. She also faces off against a Rambo-like hero: Nate Nash (Joel Edgerton), a CIA operative who only becomes interested in Egorova because he believes he can turn her into an American informant. That’s they key difference between Egorova and Nash: She wants to protect herself since she only became a spy after being coerced by her slimy uncle Vanya (Matthias Schoenaerts, so heavily made up that he looks like an unholy cross between Jude Law’s A.I. character Gigolo Joe and Russian leader Vladimir Putin). But Nash is always thinking about his mission, despite being treated as a disposable pawn by relatively crass fellow CIA operatives (superb character actors Sakina Jaffrey and Bill Camp).

Funnily enough, Nash and Egorova’s treacherous work/romantic relationship also reveals the key difference between Cold War-era pulp and contemporary spy movies that are only set in the Cold War. While Stallone’s two films inevitably encourage viewers to cheer on heroes who represent the best aspects of their country, Red Sparrow dismisses Nash for his earnest loyalty. Bear in mind: Nash is a character who, early on in the film, distracts a Russian squad car so that he can protect the identity of an American mole embedded in the SVR (the Russian intelligence organization). That kind of devotion apparently makes Nash a sucker worthy of abandonment and flabbergasting scorn.

Egorova’s chilliness is, by contrast, treated as an asset, or a sign of her independence. That is ironic, since the filmmakers degrade Lawrence’s character in multiple scenes, including the one where she is repeatedly beaten with a baton, or the above-mentioned attempted rape. Both scenes only seem to exist to further establish Egorova’s excellent self-preservation skills. She’s very good at using her feminine charms in such a way that she always improbably comes out on top.

That conflation of Cold War-grade sexism with modern-day political disillusionment makes it impossible to enjoy any scene where Egorova is positioned as a canny survivor during her spy school training. Yes, it’s fun to watch Charlotte Rampling bark orders while she plays the sadistic, stone-faced mentor “Matron,” especially when she’s commanding her students to strip and or grade each other’s boudoir skills. But it’s not so fun to realize, during a later scene in which Egorova guts an opponent with a knife, that this is the first time Lawrence’s character proves to be more than a cartoonishly oversexed Xenia Onatopp-style seductress. The fact that Egorova calls her spy school what it is — a “whore school” — doesn’t exonerate her creators from treating her as such. Authentic in all the worst ways, Red Sparrow isn’t just full of it — it’s practically overflowing.