The last time Michel Hazanavicius directed an ode to cinema — the 2011 black-and-white silent film The Artist — he won five Oscars including best picture and director. With his latest film, Redoubtable, the French writer-director has upped the ante by tackling cinematic god Jean-Luc Godard.

Based on the book Un an après by Godard’s second wife, Anne Wiazemsky, the film kicks off in 1967, when the New Wave pioneer was shooting La Chinoise in Paris with the German actress, 20 years his junior. That film’s reception sparked an existential crisis for Godard, a somewhat relatable predicament for Hazanavicius. After all, The Search, which marked Hazanavicius’ follow-up to The Artist, left critics unimpressed after it premiered at Cannes 2014, a dramatic letdown for the helmer who had received the highest honor in filmmaking just two years earlier.

Hazanavicius talked to The Hollywood Reporter about how a chance reading of Wiazemsky’s book in 2015 helped him rebound from that career low, why he wasn’t surprised by Godard’s response {or lack thereof) to Redoubtable and finding the right actor to play the legendary auteur.

What attracted you to this particular moment in Godard’s life?

Anne Wiazemsky wrote two books about her life with Jean-Luc Godard between 1966 and 1969. And I first read the second one, which is about the fall of their love story and their marriage. I immediately thought there was a movie to make with this book because it was so funny and I thought the love story was very, very touching. It’s also very tense because it’s about dealing with some political issues. [La Chinoise foreshadowed the violent student rebellions that took place eight months after the film’s release.] The reason why they split is not about cheating. It’s because Jean-Luc Godard had some political artistic goals. And because of this, he ruined his marriage, which was very interesting for me. 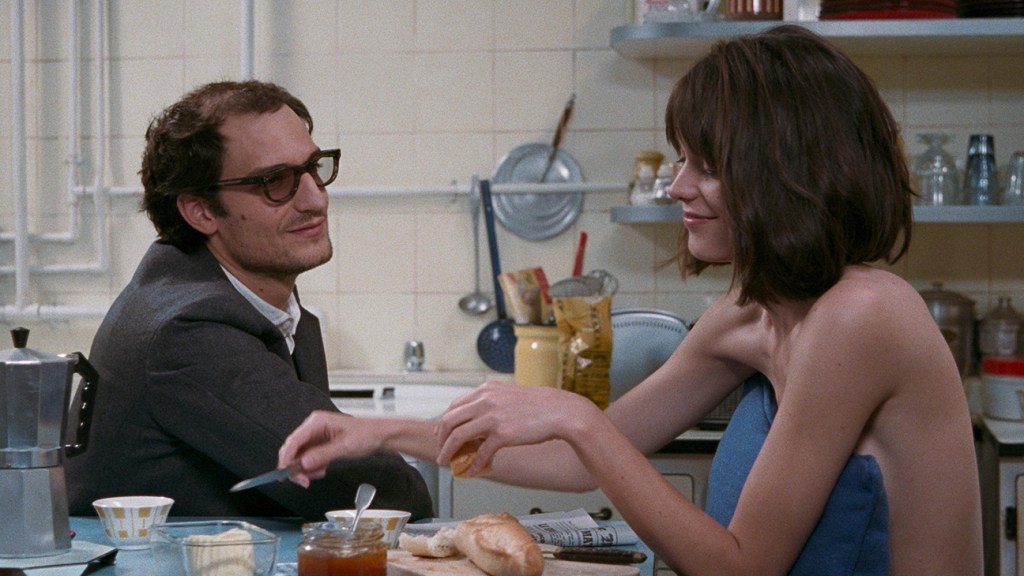 What was going on in your career at that time you read the book?

At this point in my life, I was a little bit depressed. It was very difficult for me because the reception of The Search was very harsh. Very tough. This book really awakened some feelings.

Did you have any contact with Godard during filming?

Not really. The first day of prep, I sent him a letter to tell him that I was starting a movie. I said it’s [based on] the books written by Anne Wiazemsky. The main character is named Jean-Luc Godard. But I wouldn’t say it’s about his life. I mean, it’s not a documentary. It’s my Jean-Luc Godard and not the real Jean-Luc Godard. We all know that. But I wanted him to know that I was working on this. And when I was shooting the movie, he asked to read the script. So I immediately sent him the script. And I had no answer from him. I don’t even know if he read the script right away. And when I finish the cutting of the movie, I let him know that the movie was done and if he wanted to I could organize a screening for him. I could set up a little screening, but he didn’t answer.

Are you surprised that he hasn’t responded?

No. I was almost sure he wouldn’t. He lives in Switzerland in a small village. He doesn’t like to speak. Even when he received an honorary Oscar [in 2010], he didn’t come to receive it. I wouldn’t say he’s a very social person. So, no, I was not surprised. I thought he would say something very, very mean. So far he didn’t. But I am expecting something very harsh in my direction. I expect it. I’m prepared for it. I called my parents and I said to them, “Don’t worry. He might say something very, very personal.”

Cannes Competition Lineup: The 19 Films Battling for the Palme d'Or

How difficult was it to find an actor to play Jean-Luc Godard?

Louis Garrel’s father is a director and he’s one of the heroes of the New Wave movement. When I was writing, I [thought of] Louis Garrel. I called him and said, “Listen. I’m writing this script. It’s about Jean-Luc Godard, and I think you could play it. But no pressure on you. I will send you the script. If you like it, you say yes. If you don’t, you say no.” And we called up his father. He told me, “It’s like you’re asking an observant Catholic to play Jesus.” It was kind of obvious for me to offer the part to Louis Garrel, and he’s really, really amazing in that character.

It will depend on the reception of this movie. I have a movie [in development] in the U.S. and I’d love to do it: Bob: The Musical. But it takes time to set up and put together. We’ll see.