There is a moment in Robin Wright’s directorial debut, Land, where a hunter — played by a bearded Demián Bichir — arrives at the door of a rustic cabin, where Wright’s character is suffering through a dangerous winter, to bring her a case of ramen noodles. It’s a simple gesture of decency Wright wanted to see onscreen.

“During this time that we’ve all been experiencing — really the last four years, the ugliness, the bullying, the tweets — I just wanted kindness,” says Wright, who stars in the film as Edee, a woman who retreats into the wilderness, unprepared, after suffering a grievous loss. Shot over 29 days in Alberta in the fall of 2019, Land features lush footage of nature 8,000 feet up in the Canadian Rockies and long, dialogue-free stretches as Edee learns to chop wood, hunt and survive with the help of Bichir’s quiet hunter, Miguel. The drama will have a virtual premiere Jan. 31 at Sundance before receiving a theatrical release from Focus Features on Feb. 12 and subsequent release on PVOD. 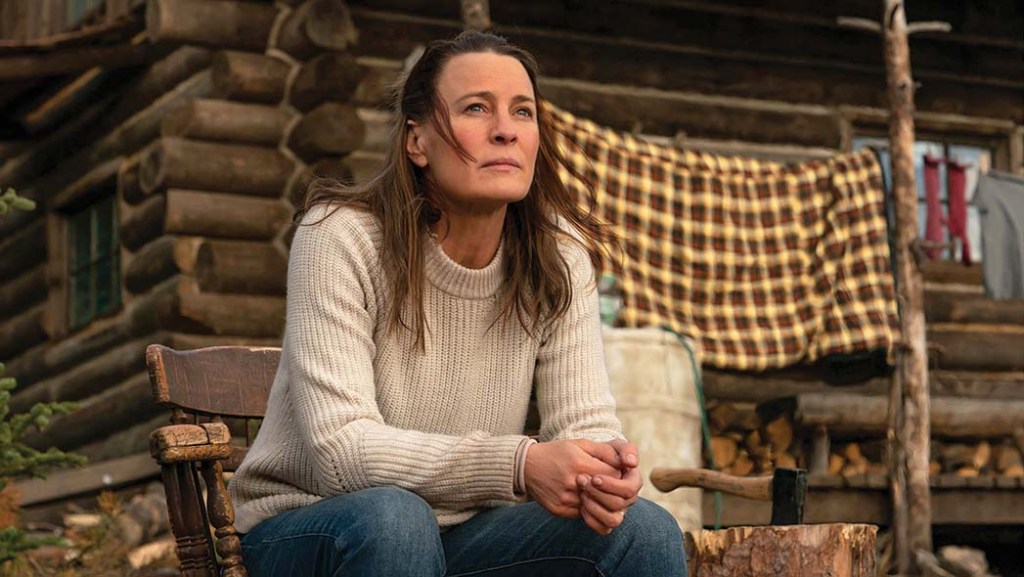 Wright, who directed 10 episodes of Netflix’s House of Cards while starring on the political series, was looking for a feature to direct when Sully producer Allyn Stewart sent the Land script to Wright’s agent, CAA’s Hylda Queally, in 2018. In the script by Jesse Chatham and Erin Dignam, Wright found a compelling story about resilience in times of loss. “It was during that period of time where random shootings were happening in our country almost biweekly,” she says. “I couldn’t even fathom an event like that. How do you get through it? You’re never going to be the same again.” Wright and Stewart shot a teaser trailer in the snow and brought the footage to pitch to backers at Cannes, where they won over Focus.

Land takes place over a period of years in the mountains, including all four seasons, and Wright and her crew had to make the most of their 29 days, with her cinematographer, Bobby Bukowski, sleeping in the cabin Edee lives in, and Wright and her producer sleeping in trailers at base camp. “We were good and scrappy,” Wright says. “We’d be shooting a summer scene, and all of a sudden the Chinook winds would come, 75 miles an hour, and the tin roof on the cabin was almost flying off. And all of a sudden, the dump of snow. So we’d run back to the tent. ‘Go get in year three, and it’s winter. She’s got long hair and the beanie.’ And then we’d have to ruddy up my face and turn it over from year one to year three in 30 minutes.”

In a script already light on dialogue, Wright stripped even more away, as she and Bichir determined that their characters would forge a bond over few words. “They didn’t have to talk about everything,” Wright says. “They didn’t have to know everything about each other and each other’s lives. There’s a quiet respect and an interesting platonic relationship that you don’t get to see very much in movies.”

Sometimes while directing herself, Wright was able to review her performance on playback, but sometimes while in a precarious spot, she had to rely on her producers, “the three ladies in the tent,” Stewart, Lora Kennedy and Leah Holzer. “I could just give thumbs-up or thumbs-down, and they would just say, ‘Thumbs-down, do it again,’ ” Wright says. “Having that trust was a gift.”

While shooting the scenes of Edee alone on the mountain, “I worried,” Wright says. “How do we keep [the audience] engaged and keep the mystery going? Where they’re not bored out of their mind with one person for 20 minutes not saying anything and not speaking to anyone and not having another character other than nature.” But after seeing a cut by her editors, Anne McCabe and Mikkel E.G. Nielsen, that juxtaposed the mystery of Edee’s tragedy with the drama of her life in the wild, Wright became convinced that less was more. “You’re inquisitive,” she says. “What happened? Something happened to this woman.”

Wright finished postproduction remotely due to the pandemic, working with post houses in New York to qualify for a production rebate there. Land was supposed to be one of Sundance’s drive-in screenings, which were canceled as COVID-19 numbers soared in Los Angeles. “We’re going to look back on this time three to five years from now and not realize how deep the trauma is,” Wright says. “It’s so layered. We won’t even know how it affected us really until we come out of it.”

In March, Wright will direct an episode for the fourth season of Ozark, and she is looking for her next feature. “I would love to direct a comedy and maybe act in it, a smart comedy, Annie Hall style,” she says. “That would be of interest because I think laughing is just a great therapy. it’s a great healer.”