The marketing campaign for Rampage portends the epic-scale battle at the film’s climax, with the tagline “Big Meets Bigger.” Based on the ‘80s video game, Rampage has a premise that seems to recall the Sharknado franchise from Syfy: What if a handful of animals were inadvertently dosed with a virus that makes them stronger, larger and angrier? What winds up making Rampage even remotely charming is less in terms of what it’s about; it’s all about who anchors the film, Dwayne “The Rock” Johnson. In the hands of a less charismatic performer, Rampage might never have risen above feeling like a Syfy movie of the week, but he makes it work.

In Rampage, Johnson plays Davis Okoye, a primate specialist at the San Diego Wildlife Sanctuary who bonds better with his primate charges than with the humans working alongside him. Specifically, Davis has grown close to George (Jason Liles), an albino gorilla who he’s taught to sign and communicate with him, which is shown to a surprisingly detailed extent. (If you want to know how much you’ll enjoy Rampage, ask yourself if you think the image of an albino gorilla flipping the bird is funny. If your answer is yes, head to the theater.) When the remnants of a space shuttle land across the U.S., they accidentally infect George as well as — in other parts of the country — a wolf and a crocodile. Davis must work with a geneticist (Naomie Harris) to turn George back to normal and fend off the mutated wolf and crocodile as they descend upon Chicago.

While Rampage is clearly derived from a nonsensical premise, it’s got a good sense of humor about itself. (When Davis sees that the mutated wolf has sprouted wings extending from its front to back paw on each side, he dryly says, “Of course the wolf flies.”) Part of why Rampage is fun, aside from Johnson’s presence, is in how the film gleefully indulges in disaster-movie tropes as well as heavily expository dialogue. Both Davis and Harris’ character Kate have personal enough reasons to want to help George and stop the nefarious brother/sister duo (Jake Lacy and Malin Akerman), whose company created the pathogen that infected the animals. But often, how we learn about those personal reasons is through dialogue that Akerman has to deliver as if she’s reading a Wikipedia page. It’s through her that we learn that Energyne, the company that the brother and sister run, is responsible for Kate’s brother’s offscreen death. And it’s through her that we get wonderfully clunky lines like “Do you remember that military contracting group we bought last year?”

The mustache-twirling bad guys are well met by their monstrous creations, though only the special effects surrounding George hold up to any serious scrutiny. The way that the mutated wolf and crocodile (the latter of which is only depicted in full during the massive Chicago-set section in the third act) attack people, buildings and anything else in their paths unquestionably calls to mind broadly cheesy FX in direct-to-DVD movies. The design of George is a cut above, in part because whatever emotional stakes there may be in Rampage — outside of wanting the people of Chicago to not be destroyed — is in the relationship between Davis and George. As much lip service is paid to the idea that Davis struggles to connect with humans (though he will eventually connect with Kate), the only relationship that matters is the one between man and ape. It’s inherently goofy to watch a human and a very large ape communicate with each other, or work to save a massive city, but Johnson (even in the early section, when he and George are close to the same height) never once falters from making this connection genuine. 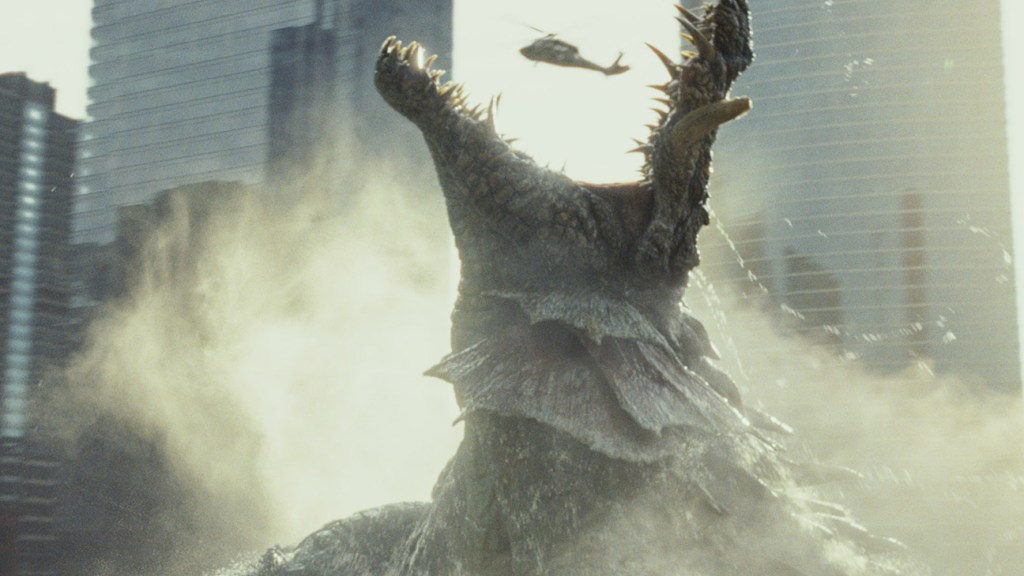 This, in effect, is what has made Dwayne Johnson so popular and one of the few remaining true movie stars. Rampage has a high-concept idea at its core, but the idea would be just as at home in a forgettable TV movie that might only be enjoyable to mock on social media. The true selling point of this movie isn’t “What if a huge ape, wolf and crocodile fought each other in Chicago?” It’s “What if Dwayne Johnson fought a wolf and a crocodile with the help of a big ape?” His presence elevates this to a likable enough B-movie; it’s the kind of film that Schwarzenegger might have made 30 years ago if the effects work were decent enough.

Rampage is not a great film, not even a great blockbuster. But then, it’s not aspiring to be great, just a couple of hours of dumb fun. On that merit, the film succeeds (in that it is exceedingly dumb fun). Though it has a talented enough cast — also including a charmingly hammy Jeffrey Dean Morgan — Rampage is able to succeed basically because of one very big reason: Dwayne Johnson. We’re just a few months away from his latest action film, Skyscraper, which seems very much in the vein of a Die Hard movie … just with Dwayne Johnson as the hero. His presence, as with Rampage, may end up elevating that film into a genuinely good time.