Some of the best and biggest movie stars are bound to work with directors with whom they feel comfortable. For example, later this month, we’ll get a sixth Mission: Impossible film, from returning director Christopher McQuarrie; star Tom Cruise has worked with McQuarrie often over the last decade, suggesting that they’re close to inseparable now. Dwayne Johnson is fast becoming one of the most reliable movie stars in the world, a new-generation Cruise; it stands to reason that he would want to stick with a few trusted filmmakers. One such filmmaker may just be Skyscraper writer/director Rawson Marshall Thurber.

Two years ago, Johnson and Thurber collaborated on the sharp and clever action-comedy Central Intelligence. In that film, Johnson and co-star Kevin Hart played old high school friends on different paths. Johnson’s character, Robby, is first seen as an obese teenager, but as an adult, he’s transformed himself into a physically imposing federal agent. Hart’s character, Calvin, was once the big man on campus, and now is a fairly meek accountant. The mismatched pairing is a classic buddy-comedy trope (it worked equally well for Johnson and Hart in last year’s Jumanji: Welcome to the Jungle). What made Central Intelligence work so surprisingly well was how Thurber (who co-wrote the film) directed the friction-heavy comedy sequences. Johnson, too, got to throw himself into a character who’s not just intimidating but has a very visible softer side, often played for laughs.

If only there were as many, or close to as many, laughs in Skyscraper. Thurber wrote and directed this one on his own, and it’s oddly devoid of laughs from basically the start. There are a couple of light jokes and ribbing between Johnson’s Will Sawyer and his wife, Sarah (played by Neve Campbell); one of the gags in an early scene exists so that it can be creakily referenced in a key scene during the finale. Largely, Skyscraper takes itself a bit too seriously considering its utterly preposterous setup: a security consultant (Johnson) has to rescue his family from the tallest building in the world before it is completely engulfed in fire. Oh, also, he has to take down European terrorists, and he’s been framed for a crime he didn’t commit.

It’s less surprising to see Johnson starring in a role like this than it is to see Thurber writing and directing the film. He’s only directed a handful of films, but they’re all fairly similar in the sense that they’re funny (or, if your mileage may vary, they’re trying to be funny). His 2004 feature debut Dodgeball: A True Underdog Story, the 2013 comedy We’re The Millers and Central Intelligence all are consistently outrageous comedies, even if they’re not all similarly hilarious. Both Dodgeball and Central Intelligence remain Thurber’s best films, the latter offering Johnson a welcome opportunity to goof off and play against his physical type. That movie could easily explain why this actor and director want to work together again, but doing so on a project that’s so comedy-free is just a bit odd. 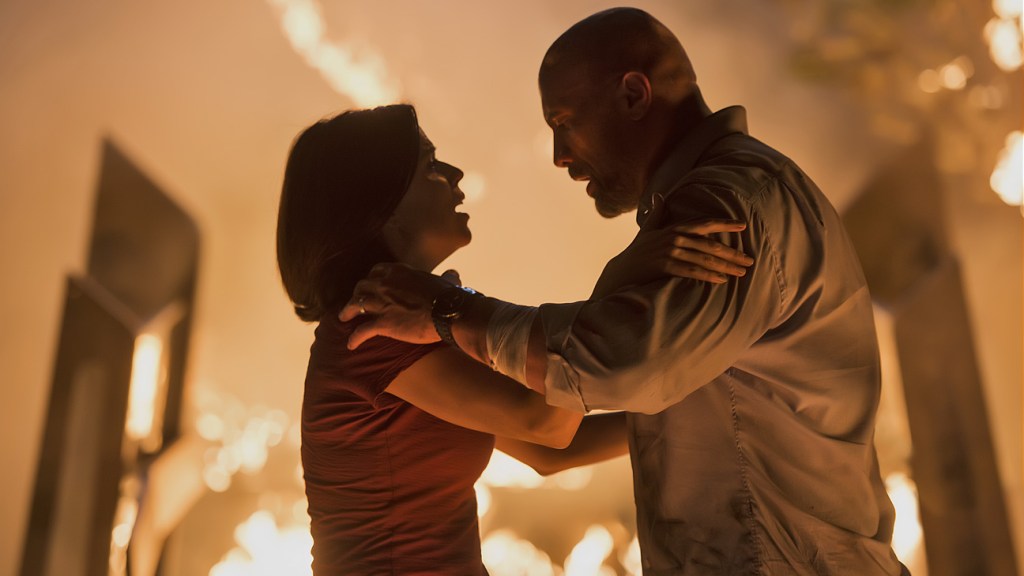 It’s equally odd that Skyscraper sidesteps levity more often than not. Yes, the stakes of the film are life and death, but consider this film’s major inspiration — unspoken or otherwise. When the heroic cop, John McClane, has to fight off European terrorists in Die Hard in a high-rise in Los Angeles, he’s still able to have some kind of sense of humor about the insanity he’s involved himself in. McClane is more of a wisecracker; here, Johnson’s character, Will, is more straightforward, but it would be have been pleasant to get a line a la “Come out to the coast, we’ll have a few laughs.” Even when Will has no choice but to climb on the outside of the Hong Kong skyscraper by putting duct tape on his hands and feet, he’s barely able to admit quickly, “This is stupid.” That’s as far as one-liners go in this movie, and it’s weirdly lacking.

Dwayne Johnson and Rawson Marshall Thurber are already preparing their next project together. After Johnson co-stars in the Jumanji: Welcome to the Jungle sequel next year, as well as Disney’s Jungle Cruise, he’ll work with Thurber on a hotly fought-over project called Red Notice, in which he’ll play an Interpol agent trying to capture a wanted art thief. The premise, like the premise of Skyscraper, could be heavily inspired by other action films, and it could easily have plenty of comedy injected into the mix. Now that Johnson and Thurber have worked together on two films, one can only hope that Red Notice will be a lot funnier and looser than Skyscraper.

Dwayne Johnson's 'Skyscraper' Sells Itself as an Action Throwback