Roger Deakins tends to discuss his work in a calm and methodical way, but even the veteran director of photography can’t stop a big smile from spreading across his face as he recalls a particularly tricky method of keeping the camera in motion on Sam Mendes’ war epic 1917.

“The camera comes off a 50-foot Technocrane, it gets carried up the hill and walked backward [with a] Mini Libra head,” Deakins says of the choreography required in the shooting of a take of the film’s climactic final run across a battlefield. “Then it gets put on another Technocrane that’s on the back of a truck, and it goes racing off, and the grips who carried it are in uniform, so they got paid as being extras. There were probably 13 grips and our camera car driver.”

If that sounds like complex camera trickery, that’s because Deakins — who has earned 14 Academy Award nominations and won the Oscar for 2017’s Blade Runner 2049 — and Mendes worked to pull off an extraordinary feat in making the $90 million-budgeted film.

1917, now in limited release and going wide Jan. 10, is made with a series of long shots, the longest of which was about 8½ minutes, stitched together.

The experience of working with such meticulous choreography was “exhilarating,” Deakins says. “Everyone’s high-fiving. All the grips I’ve known for, like, 30 years, saying, ‘Oh, my word, that was something. I’ve never done that before.’ It was really great.”

Mendes, who worked with Deakins on 2005’s Jarhead, 2008’s Revolutionary Road and 2012’s Skyfall, says that shots averaged 20 takes, with the most difficult needing as many as 50. 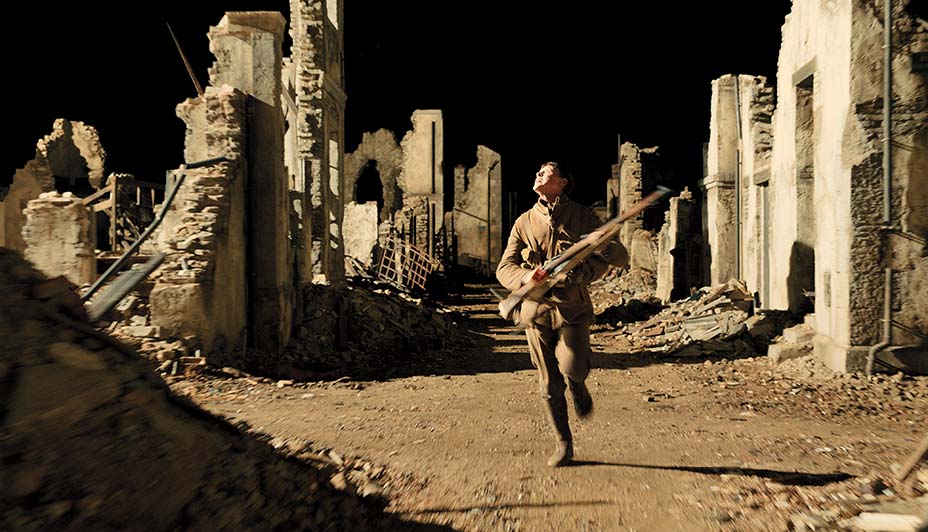 This was the environment for the production, which began after months of rehearsal and detailed blocking to create the illusion of a single take. 1917 follows the story of two British soldiers (George MacKay and Dean-Charles Chapman) as they race across enemy territory on the front lines of World War I to deliver a message that could save the lives of 1,600 of their fellow servicemen.

One tricky sequence featured the pair crossing No Man’s Land, which Mendes says involved “constantly changing the actors’ relationship to the camera so you weren’t simply following them from behind.”

Explains Deakins: “When we got on No Man’s Land, it was like, ‘OK, well, how do we work with the actors and choreograph the camera movement with the actors so you see details, and then you go from one character’s close-up to another character?’ And then you see them wide, and then you see what they’re looking at. That was really interesting. That informed a lot about what we were going to do with the rest of the film — how we could free the camera at moments where we needed to.”

1917 was shot in various U.K. locations, from Salisbury Plain and Northumberland to Glasgow and Bovingdon, in central England, where the filmmakers created more than a mile of trenches.

Deakins employed a trio of prototypes of ARRI’s Alexa Mini LF, a lighter version of the company’s large-format Alexa digital camera. To move the cameras, Deakins tested many rigs. “We tested everything we could think of and then whittled it down to basically four major systems,” he says (the Steadicam; Arri’s Trinity stabilization rig; Stabileye, a small and remotely operated stabilizing head; and a Mini Libra remote head). The goal was to make sure that the camera followed the action but didn’t draw attention to itself. “You don’t really feel the change in the technique, and that was key, really, because you didn’t want the camera to be a character. It’s not that kind of film,” Deakins says. “You just wanted it to disappear in the image, and for the most part, I think that’s quite successful.”

Making of '1917': How Sam Mendes Filmed a "Ticking Clock Thriller"