Continue to The Hollywood Reporter SKIP AD
You will be redirected back to your article in seconds
Skip to main content
December 7, 2016 12:31am
Logo text

Rogue One‘s band of rebels will be storming the Middle Kingdom a few weeks after they overrun the rest of the world.

The release plan mirrors the approach taken with Star Wars: The Force Awakens, which landed on Chinese screens on Jan. 9 of this year. And the stakes for Lucas Film and Disney are again sky-high.

China is expected to usurp North America as the world’s largest film market sometime in the next few years. But as THR reported in the lead-up to Force Awakens‘ release, due to unique historical and cultural factors, the Star Wars saga — Disney’s most valuable franchise — doesn’t have the same deep nostalgic appeal in China that it does in much of the rest of the world.

Force Awakens earned a healthy $125.4 million at the Chinese box office in January, but that’s only the 12th biggest gross in China this year — well below other Disney titles like Zootopia ($236 million) and Captain America: Civil War ($190 million), and a far cry from Force Awakens‘ massive $936 million dominance in North America.

'Rogue One': 5 Things to Know About the Chinese Supporting Stars

Disney is trying to change this scenario for future Star Wars installments. Having blitzed Chinese media for Force Awakens with a multifaceted marketing campaign designed to bring a galaxy far, far away a little closer to the hearts of Chinese filmgoers, the studio’s next step was to pull some of China’s cinematic universe into the Star Wars fold. Rogue One features two of the country’s biggest stars — Donnie Yen and Jiang Wen — in major supporting roles. Wen plays the badass freelance assassin Baze Malbus, while Yen co-stars as the blind warrior Chirrut Imwe. The local stars are front and center in Disney’s China poster for the film. (See the poster below and learn more about the two actors and their parts here).

Directed by Gareth Edwards, Rogue One: A Star Wars Story is set before the events of the original 1977 film, A New Hope (1977). It stars Felicity Jones as the head of a secret squad of Rebels looking to steal plans for the Death Star. The international cast is rounded out by rising British actor Riz Ahmed and Mexican actor Diego Luna.

Rogue One premieres in Los Angeles on Saturday — with such elaborate festivities that Lucas Film is shutting down roads in Hollywood for a full week — before its release across North America on Dec. 16. It opens in some international territories on Dec. 14 and Dec. 15. 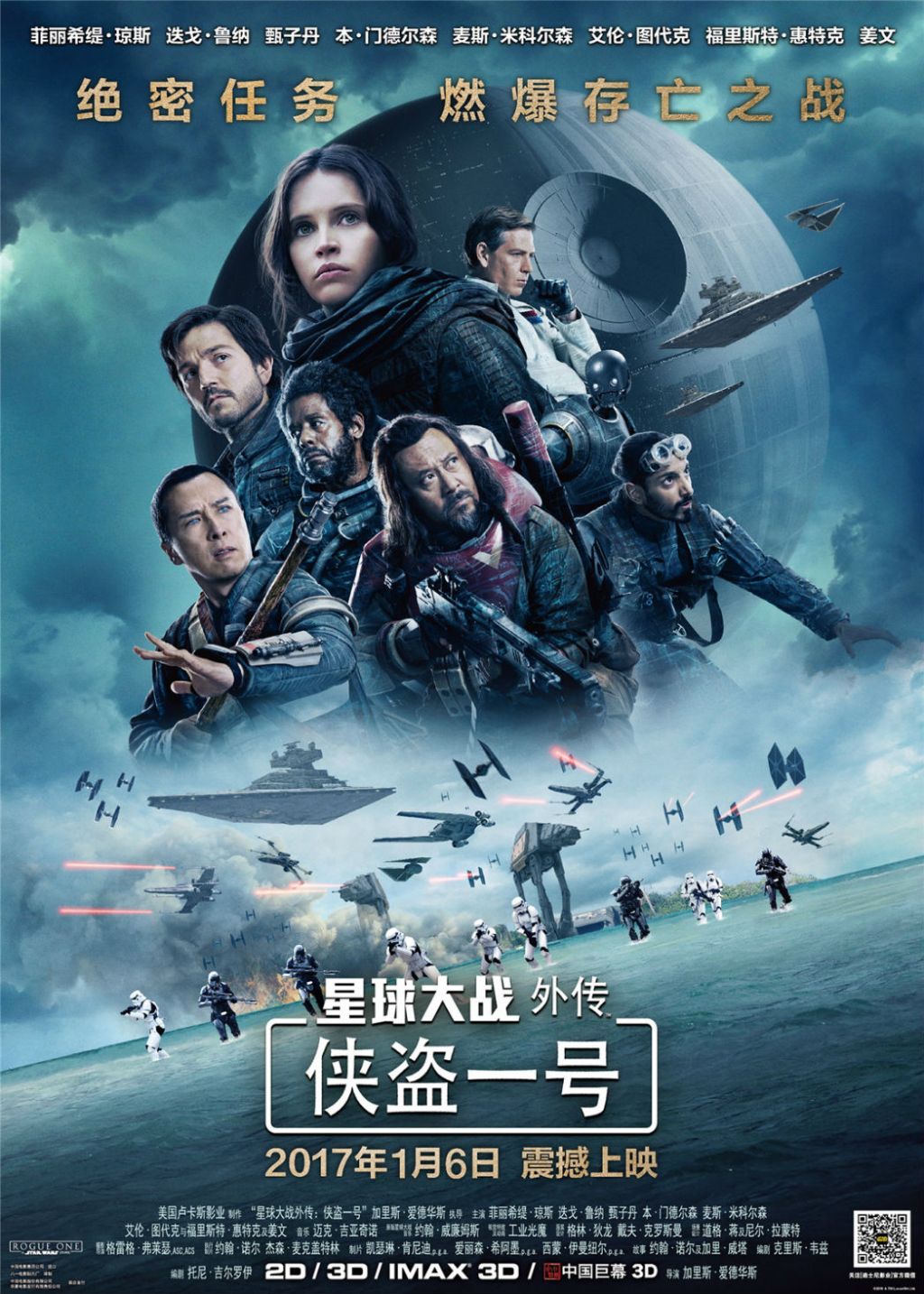