Ruthie Tompson, who spent four decades at The Walt Disney Co. working on animated features, virtually every one from Snow White and the Seven Dwarfs through The Rescuers, has died. She was 111.

As supervisor of the scene-planning department at Disney Studios, Tompson helped to establish the camera mechanics used to photograph animated scenes and background art onto film. That expertise earned her a pioneering invitation to join the International Photographers Union in 1952.

“Apparently the boys were impressed with my curiosity and decided that, [because of] what I did mechanically with the camera moves, that I should be a part of the camera union,” she said in the 2014 short film Showfolk, which focused on seven residents of the MPTF home. “I was one of two women that were taken in. I thought, ‘That feels good.’ ”

Born in Portland, Maine, on July 22, 1910, Tompson was raised in Boston. She and her family moved to Oakland, California, in 1918 before settling in Los Angeles near Walt Disney’s first studio, located in a Craftsman bungalow on Kingswell Avenue in Los Feliz.

“I used to walk by the Disney Bros. storefront,” she recalled in her Disney Legends biography. “I was curious and snooped around, and, finally, they invited me in for a look. After that, I’d visit quite often. I remember sitting on the bench and watching Roy [O. Disney, Walt’s older brother] shoot the animated cels onto film.”

“Once Roy asked us neighborhood kids to play tag in the street while he photographed us with a movie camera. I suppose it was for the Alice Comedies; he paid each of us a quarter, which I was glad for because I could buy licorice.”

As a recent graduate of Hollywood High, Tompson was working at Dubrock’s Riding Academy in the San Fernando Valley, where the Disney brothers were learning to play polo.

“I never wanted to do what I was supposed to do,” she said in Showfolk. “My nose was just leading me to what I call trouble. That’s when I ran into Walt Disney.”

She said that Disney recognized her from an appearance in one of his films and offered her a job as a painter in the ink and paint department. “I don’t care if you can draw or not. We’ll teach you what we want you to do,” she told Vanity Fair in 2010. 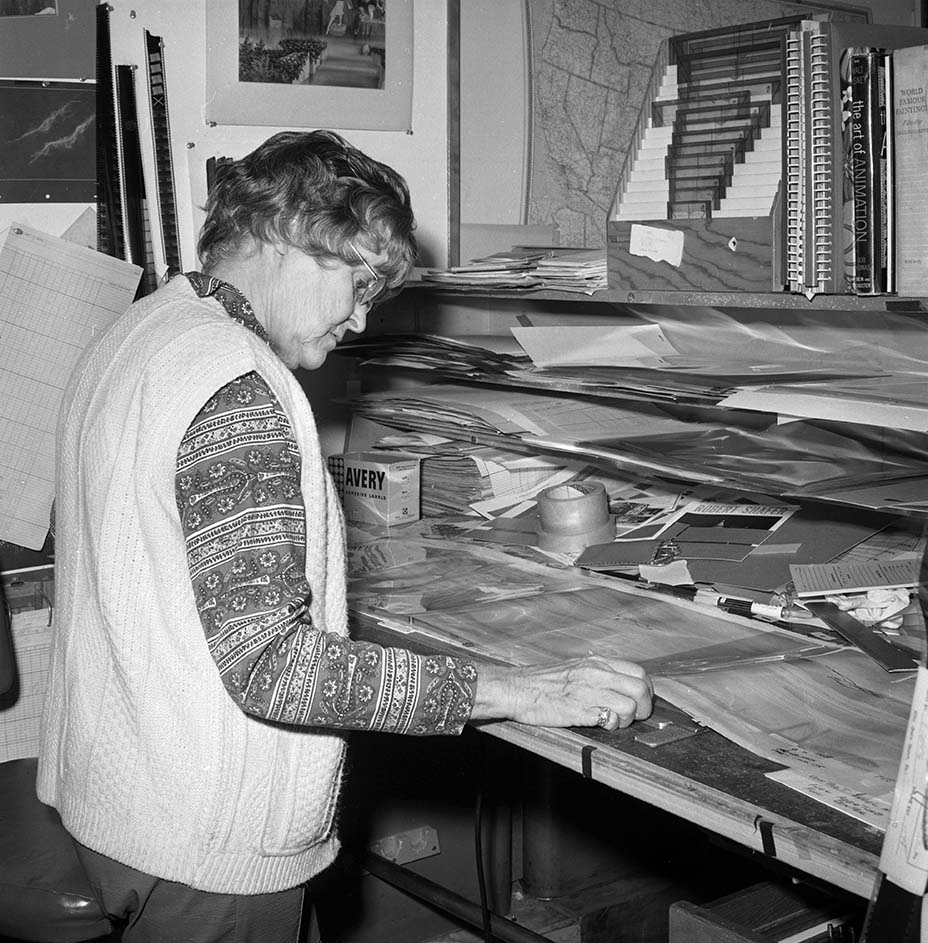 Tompson then assisted on the studio’s first full-length animated feature, Snow White and the Seven Dwarfs — “We worked into the night, day after day, until we got it exactly right!” she said — and on the short cartoon Lonesome Ghosts, both released in 1937. She was soon assigned to review the animation cels before they were photographed onto film, and in 1948, she was promoted to animation checking and scene planning.

As Bob Broughton, former Disney supervisor of special photographic effects, later recalled: “Ruthie was mechanically inclined. She was excellent at figuring out the mathematical and mechanical logistics of camera moves.”

After working for Disney as it released such animation classics as Fantasia (1940), Alice in Wonderland (1951), Sleeping Beauty (1959), One Hundred and One Dalmatians (1961) and The Jungle Book (1967), Tompson retired from Disney in 1975, shortly after working on The Rescuers (1977). (She did work on projects for other studios for another decade.)

“Mickey Mouse and I grew up together,” she often said.

Named a Disney Legend in 2000, Tompson received an ovation when she attended the 2017 D23 Expo in Anaheim, days before her 107th birthday.

Mindy Johnson, Disney historian and author of the 2017 book Ink & Paint: The Women of Walt Disney’s Animation, said the best way to describe Tompson is “simply remarkable. She was perhaps the last link from the earliest origins of animation in Hollywood. Ruthie was a living witness and vital contributor to the progress and growth of the animation industry as we know it today.

“In addition to conducting Ruthie’s oral history at the Academy, in 2017 I was honored to feature Ruthie as part of a landmark celebration recognizing the contributions of women to early animation at the Academy of Motion Picture Arts and Sciences. We are indebted to her ingenuity and so deeply blessed to have known her. It will continue to be one of my greatest joys to honor and celebrate the accomplishments of this remarkable woman!”