After years of fielding offers to play Israeli secret agent Eli Cohen in various projects, Sacha Baron Cohen took on the task in Gideon Raff’s six-part Netflix series The Spy, which chronicles Eli Cohen’s life as a poor accountant who is recruited by Israeli intelligence to pose as Kamel, a rich Syrian businessman who infiltrates the Syrian government. Cohen, 48 (no relationship to the real-life figure he plays), opened up to THR about making the switch to drama, committing to months of research and relating to living a double life.

Why was this a role you wanted to play?

It’s a superhero story of sorts. He’s a deputy accountant in a supermarket who ends up becoming arguably the most successful spy of the 20th century. He’s a real version of a spy, unlike James Bond or any of those other cinematic creations. He’s deeply emotional, increasingly troubled and ultimately destroyed by those tensions within him of his obligations to his country, his loyalty to his family and his struggle over who he really is. For me to make the transition from comedy to drama was something that I’ve been reluctant to do. I’ve dabbled in it in Hugo and Les Misérables and a little bit in Sweeney Todd, but to actually take a lead role where the character was essentially relatable was something that I was not used to doing … I was used to playing the larger-than-life, peculiar, outlandish, fascinating characters.

What kind of research did you do?

I spent about a month in Morocco really observing wealthy Arab tourists who had come to Casablanca — I’d be sitting on a sofa in some very high-end place watching men, the way they flirted with women, because they’d do that in Casablanca. I’d go there with somebody from the production so we could pretend that we were having a conversation, but really I wanted to observe how these very wealthy Arab men would behave because I realized Eli was having to do that himself. It’s a story of one of the greatest-ever Method actors, where he can’t break character for six years. 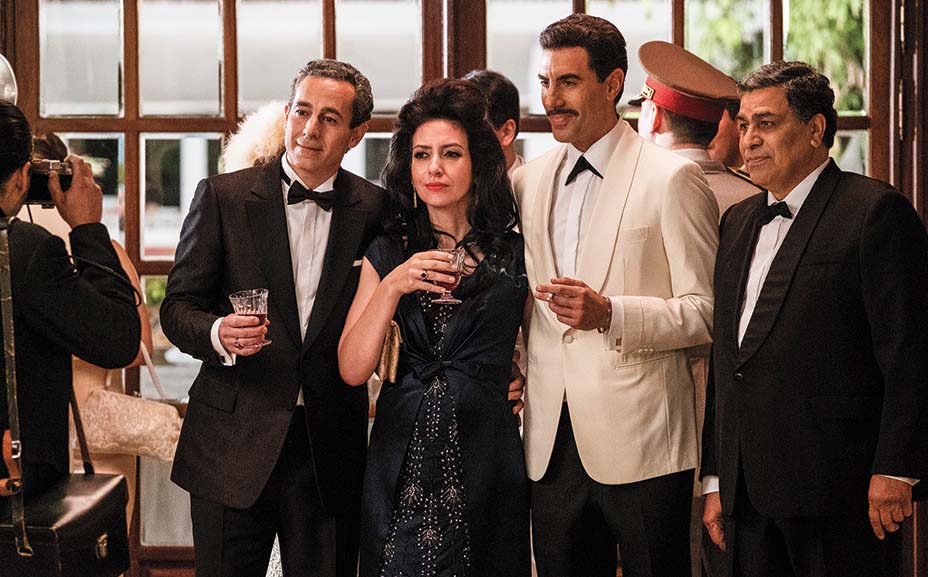 How did you approach Eli’s two different personas?

One very important thing was to differentiate between these two accents because he was born in Egypt, so I learned this Egyptian accent, and then he had to pretend to be an Argentinian of Syrian descent. Finding a dialect coach who knew the differences between Egyptian and Syrian was a very, very hard process, and actually I went through about three dialect coaches. And finally, on the first day of filming, in the first scene, there’s a colonel who I’m acting against, and at the end of the first take, he said, “You pronounced these three things wrongly.” I said, “Well, how do you know?” And he said, “Well, I’m a dialect coach and I lived in Syria for three years,” and I said, “You’re hired!” I spent the rest of the production with him — I fired my dialect coach. It’s something that probably very few people outside the Arab world appreciate, but it allowed me to differentiate between these two personas.

Did stepping into this new genre feel out of your wheelhouse, or was it a similar process to inhabiting your more outlandish characters?

It was completely out of my wheelhouse. There were similarities in that for each character, I try to develop a complete persona, from the way they walk to their accent to their appearance to their backstory. In Who Is America?, I tried to be locked in with the character — in other words, I want to be in a position where I know so much about the character that any word that comes out of my mouth is consistent with the character and that anyone can ask me anything about the character and the answers will appear plausible. We use that term on set, of me being “locked in.” It sounds a bit pretentious, but it’s the only real way you can survive if you’re suddenly thrown into the real world for a while. So, I definitely understood the idea of living this dual life.