An icon of the American stage and screen for half a century, Alan Alda has amassed an unrivaled body of work as an actor, writer, director and popular science promoter. Even at 82, the Bronx-born veteran still brings a light-footed bounce and twinkle-eyed mischief to every performance, belying the depth and precision of his finely honed dramatic skills. Alda’s natural wit and warmth inevitably led him to major in comedy, but these qualities also serve him well when he plays villainous characters who mask their venality behind smiling, silver-tongued charm.

Paul Sorvino, Actor in 'Goodfellas' and 'That Championship Season,' Dies at 83

To date, Alda has been celebrated with six Emmys, six Golden Globes, three DGA Awards and an Oscar nomination. On Jan. 27, he will add a SAG Life Achievement Award. In 1979, he famously did a cartwheel as he collected his first screenwriting Emmy for M*A*S*H. But big prizes have always been a by-product of work that consistently radiates intelligence, empathy and human curiosity.

“At a very early age, I wanted three things,” Alda told the Harvard Business Review in 2017. “To work with material I valued and people I respected in front of an audience that got it. I could have been in a small regional theater for the rest of my life, and I wouldn’t have been disappointed.”

Alda was born Alphonso Joseph D’Abruzzo on Jan. 28, 1936. His Italian father, Robert, was a stage actor and singer, his Irish mother, Joan, a homemaker and former beauty queen. Despite a painful childhood brush with polio and his mother’s bouts of schizophrenia, Alda grew up with a minimum of trauma. “We never knew we were in a crazy world,” he told the Harvard Business Review. “That was just the world, and people not in it were civilians whom we felt sorry for. That was my naive way of looking at it when I was boy.”

Alda was raised with the twin religions of Catholicism and show business. His faith in the former faded, but the latter stuck for life. After attending Fordham University in the Bronx, where he met his future wife, Arlene, Alda served a year at Fort Benning and did a six-month tour with the U.S. Army Reserve in Korea. But there was never any doubt about his natural vocation.

Launching his stage career with an improv comedy troupe in the late 1950s, Alda was soon a Broadway regular, earning his first Tony nomination for The Apple Tree in 1967. His gangly, angular looks and wise-cracking, fast-talking manner initially proved an uneasy fit for early big-screen roles like Richard Quine’s bootlegging drama The Moonshine War (1970) and Paul Wendkos’ schlocky horror thriller The Mephisto Waltz (1971). But there were embryonic hints of his more socially engaged, emotionally nuanced screen persona in George Bloomfield’s delicate two-hander Jenny (1970), which co-starred Alda as a young filmmaker aiming to dodge the Vietnam draft with a marriage of convenience to a newly pregnant single woman, played by Marlo Thomas.

Of course, Alda’s career-making breakthrough came when he was cast as Captain Benjamin Franklin “Hawkeye” Pierce in the beloved CBS comedy drama M*A*S*H, which ran from 1972 to 1983. Despite his responsibilities as chief surgeon in a mobile army surgical hospital during the Korean War, Hawkeye also was an anti-authoritarian rebel, a boozy ladies’ man and a closet peacenik who refused to carry his regulation firearm. 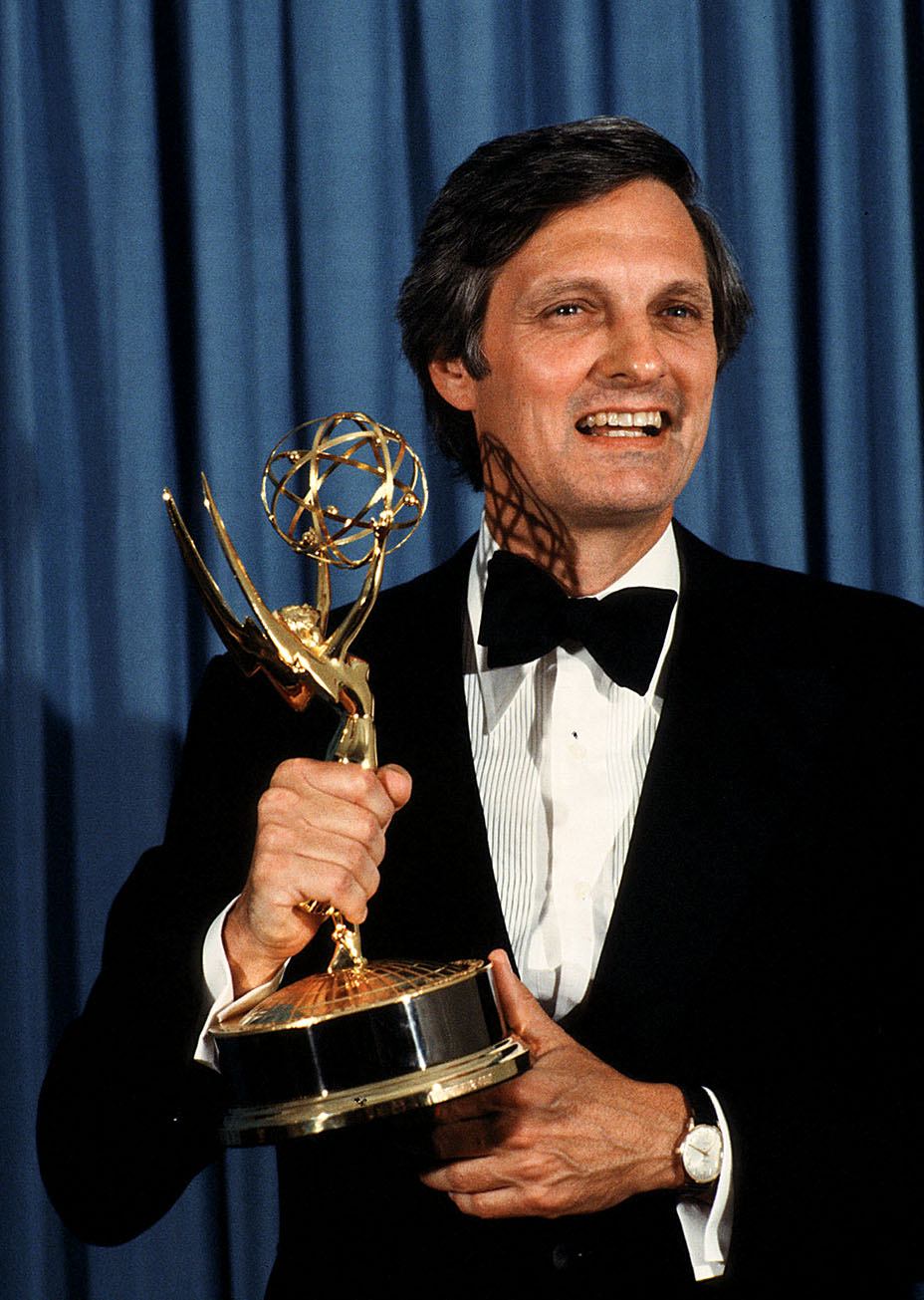 The only castmember to appear on all 251 episodes of M*A*S*H, Alda spent 11 years commuting between his family home in New Jersey and the show’s L.A. set. His cynical screen persona chimed with the lingering counterculture mood of post-Watergate, post-Vietnam America. But like Tom Hanks or Clint Eastwood, Alda has a flair for transcending political tribalism, and Hawkeye appealed across the spectrum.

“Some people think he was very liberal,” Alda told PBS in 2011. “But he was also a traditional conservative. He wanted nothing more than to have people leave him alone so he could enjoy his martini, you know? Government should get out of his liquor cabinet.”

Alda insisted that Hawkeye was more antihero than hero, but the star’s own natural affability made him a beloved national treasure all the same. “Hawkeye himself was a flawed character,” Alda told Collider in 2007. “A smart aleck, a skirt chaser, he drank too much, he always thought he was right. But I guess I covered people with the slime of my amiability. They just couldn’t resist.”

As M*A*S*H evolved into a ratings juggernaut, Alda gained more creative power. Writing 19 episodes and directing 32, his work on the show was nominated for 21 Emmys, winning five. The feature-length, Alda-directed finale attracted 106 million viewers, still a record for a U.S. network series.

His success with M*A*S*H opened the door to a healthy run of big-screen acting, writing and directing work. He earned a Globe nomination for his suave, multidecade-spanning performance in Robert Mulligan’s film version of the bittersweet Broadway infidelity farce Same Time, Next Year (1978) and explored the darker underside of his charming screen persona as a slick, unscrupulous Democratic senator in Jerry Schatzberg’s The Seduction of Joe Tynan (1979), which he also scripted. He earned further Globe nominations as actor and screenwriter of the commercially successful ensemble drama The Four Seasons (1981).

Middle age ushered in a fruitful second act for Alda. Mostly playing shadowy political operators and flawed patriarchs, he added some agreeably gritty texture to his nice-guy image. He began an acclaimed run of Woody Allen collaborations with Allen’s midcareer masterpiece, Crimes and Misdemeanors (1989). An arrogant, shallow, sex-pest director of hit comedy movies, Alda’s character was partly modeled on M*A*S*H co-creator Larry Gelbart. But even this mean-spirited inside joke came with a side order of empathy. After Gelbart’s death in 2009, Alda warmly praised his “genius for writing” and his “immense talent for being good company” in a Los Angeles Times obituary.

More recently, Alda has specialized in morally murky political mandarins, lending professorial authority and relatable humanity even to unsympathetic characters. He earned his only Oscar nomination so far for his juicy supporting role in Martin Scorsese’s The Aviator (2004) as Republican Sen. Owen Brewster, whose antagonism toward airline mogul Howard Hughes eventually cost the politico his career. Later, in Steven Spielberg’s Cold War thriller Bridge of Spies (2015), Alda brought old-school gravitas to his shared scenes with Hanks.

Alda also has enjoyed a return to high-caliber TV roles in recent years on shows like 30 Rock and The Blacklist. Most notably he became an Emmy-winning fixture on the final two seasons of NBC’s long-running White House drama The West Wing, playing another Republican senator and presidential hopeful, Arnold Vinick. Alda gave Vinick an avuncular charm and quick-witted intelligence, never stooping to caricature despite being on the opposite side of the political divide in real life. Ironically, he had been an early frontrunner for the lead role of President Josiah Bartlet before Martin Sheen won the primary.

For the past two decades, Alda has balanced acting work with a parallel career as a prize-winning media ambassador for new ideas in science and technology, hosting PBS shows like the long-running Scientific American Frontiers and The Human Spark. In 2009, he launched the Alan Alda Center for Communicating Science at Long Island’s Stony Brook University. Two years ago, he founded Alda Communication Training in partnership with the State University of New York, which draws on improvisational techniques from the acting world to improve the communication skills of business and science clients.

“Science and art are two long-lost lovers, yearning to be reunited,” Alda told The New York Times in 2014, “and now I get to be a matchmaker.”

Despite a Parkinson’s diagnosis three years ago, which he made public only in July, Alda remains characteristically optimistic and energetic. “It’s probably only a matter of time before somebody does a story about this from a sad point of view,” he told CBS News, “but that’s not where I am.”

The star remains tirelessly engaged with acting, best-selling memoirs, scientific podcasts, communications skills, teaching and more. After a half-century of emotional and intellectual engagement, his insatiable curiosity about his fellow humans still burns brightly. As he once put it, only half joking, “Obsession has been very good to me.”