A year ago, 1917 seemed poised for Oscar glory. The tracking-shot war film took home top honors from the BAFTAs, the Directors Guild and the Producers Guild. Among the most prominent Oscar precursors, only the Screen Actors Guild went in a different direction, choosing Parasite for best ensemble. Fast-forward three weeks, and Parasite was named best picture at the Academy Awards.

Even though the best ensemble category honors just the cast — not every aspect of a film — SAG also nailed tough Oscar best picture wins for Shakespeare in Love over Saving Private Ryan, Crash over Brokeback Mountain, and Spotlight over The Revenant. In other words, for Oscar forecasters out there, you’ll want to pay attention to the SAG Awards on April 4.

That’s not to say they get every year right — far from it. Only 44 percent of best ensemble winners have gone on to win best picture. This year, only Minari and The Trial of the Chicago 7 are up for the top honor at both the SAG Awards and Oscars, since the actors’ union left off top contenders like Nomadland, Promising Young Woman and Mank (films that wouldn’t necessarily be considered ensemble pieces). This year is tied for the fewest Academy/SAG overlaps since 2007, when No Country for Old Men was the only best picture/best ensemble joint nominee and won both awards. The SAG track record is much stronger for individual acting awards — 72 percent of SAG honorees in the four solo categories go on to win Oscars for their performances. But the ceremony does seem to have a knack for identifying potential upset picks for best picture.

All this leads to the question — who will claim that mantle April 4? And is bigger better in the ensemble race when it comes to cast size?

Da 5 Bloods may be counting on having a longer list of names for voters to support: Fifteen castmembers from Spike Lee’s film are included in the best ensemble nomination, compared with 10 or fewer for its four competitors.

On the smaller-cast end of the spectrum is the other Chadwick Boseman film, Ma Rainey’s Black Bottom, with only six nominated castmembers. But that film can take hope from another source: SAG already has shown its affection across the set of nominations, making it just the 12th film in the guild’s history to be nominated for best ensemble, best actor and best actress. Of the first 11, however, only three won best ensemble (Shakespeare in Love, American Beauty and Chicago).

Arguably even more historic might be a win by Minari. Before 2020, only one foreign-language film had even been nominated for best ensemble: Life Is Beautiful, which lost to Shakespeare in Love. Now, we might be looking at two wins in a row if Minari can follow up on Parasite‘s feat.

The Trial of the Chicago 7 has to overcome perhaps a stranger curse. In 25 years, no actor has ever won three best ensemble awards. So far, 18 actors have won twice, and if Aaron Sorkin’s courtroom drama comes out on top, Michael Keaton would be the first of those 18 actors to manage the three-peat, having won for 2014’s Birdman and 2015’s Spotlight in back-to-back years. [Incidentally, that matches Tom Wilkinson for The Full Monty (1997) and Shakespeare in Love (1998) as the only actors to win in consecutive years.]

Where does all of this leave us? In line with the earlier discussion of the SAG Awards predicting the Oscars, the Oscar nominations also can help predict the SAGs: The Birdcage (1996) remains the only best ensemble winner without an Oscar best picture nomination. So, One Night in Miami, Da 5 Bloods and Ma Rainey’s Black Bottom may be facing an uphill battle.

None of the five casts has a perfectly straight path to the victory, which will make April 4 a must-watch event for awards-season fans. Best picture overlaps The Trial of the Chicago 7 and Minari likely have the best chance — and if either does emerge victorious, it will earn a leg up three weeks later at the Oscars. 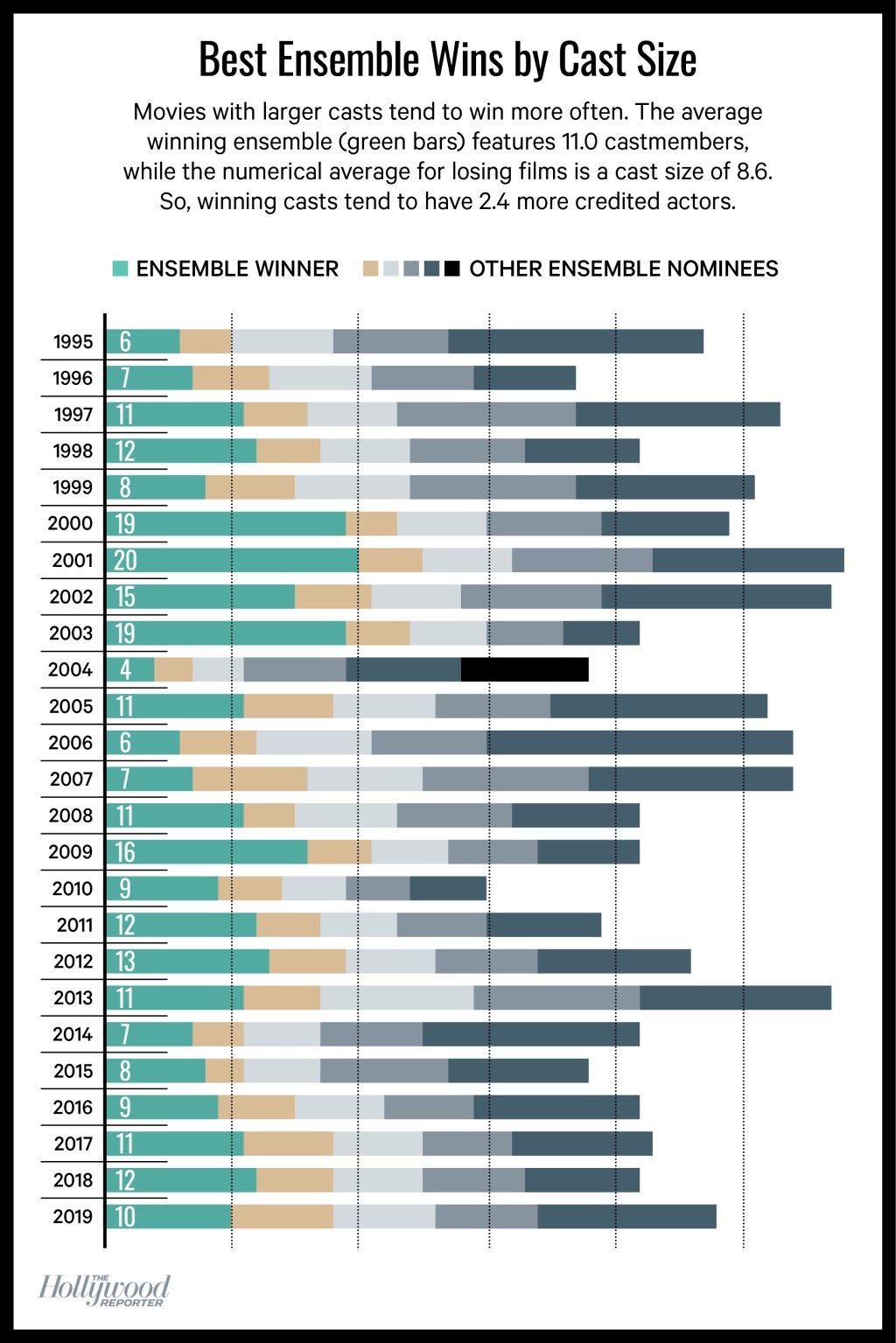