When Saga No. 54 hit store shelves last month, fans of the long-running science fiction comic book series had to deal with not one, but two, shocking reveals.

The first was what happened in the story itself, which will be left undeclared, in respect of those following the series in collected editions, but which changes the status quo (and cast list) of the narrative considerably. The second came in the letter column following the story’s final page, with writer Brian K. Vaughan announcing that the series was going on hiatus for at least a year, to allow he and artist Fiona Staples a chance to recharge.

Heat Vision talked to Vaughan about what went into the decisions behind both the story’s big moment and the “intermission,” as he calls the series’ temporary hiatus.

To say that Saga No. 54 ends with what might be the most shocking last page of a series that’s made shocking last pages a tradition is putting it mildly. We’ll get more into the intermission shortly, but what made this feel like the right point in the series to make such a dramatic change to the series?

This was all part of the plan from the very beginning. I always hoped that readers would become attached to everyone in our cast, regardless of whether or not those characters were “heroes” or “villains,” but as Hazel’s narration suggested way back in our first issue, she’s the real protagonist of this story, so everyone else is, if not expendable, definitely at risk, especially in our war-torn universe.

Hazel’s importance to the series was arguably obscured in the earliest issues, when she was a baby and almost as much an abstract concept — or a Macguffin, even — as she was an actual character. With what happens in the latest issue — again, being vague — it’s tempting to see this as something that will forever change her and the way she approaches everything and everyone around her.

Definitely, this is the most significant change to the narrative yet, and I think it’s fair to say that our story will look and feel entirely different when it returns.

There’s an obvious symbolism in the end of the fight between Marko and the Will. With the understanding that, of course, the story isn’t over, was there a reticence in the “lesson” learned here, in relationship to the character who chose peace over war? It feels surprisingly pessimistic, and at odds with the optimism central to Hazel’s very existence, for want of a better way to put it.

I never try to write any kind of “lesson” into anything I write, but I’ve always been fascinated by violence. In fiction, I think violence can be beautiful, hilarious and cathartic, while in the real world, I’ve found it’s pretty universally ugly, immoral and counterproductive. There’s probably a lot of me wrestling with that divide in this final showdown. 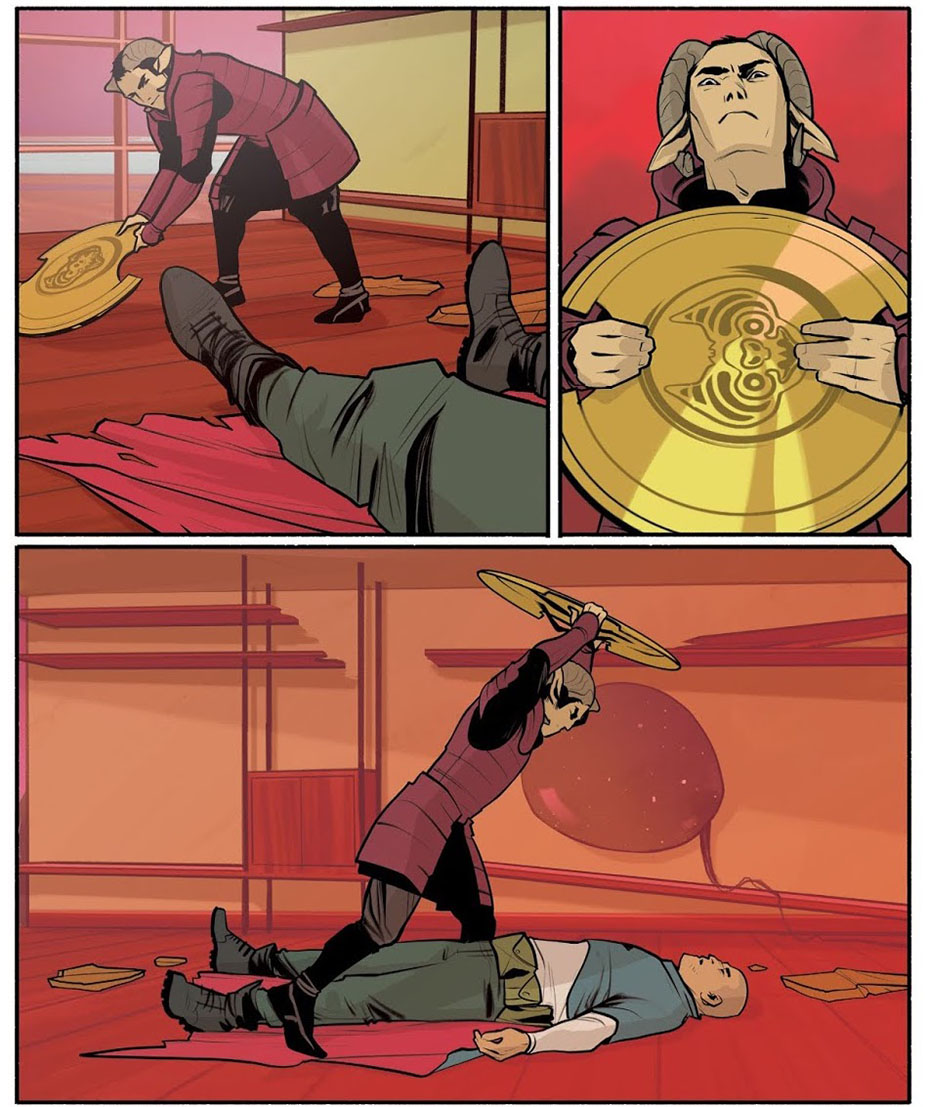 There’s a line in Hazel’s narration in No. 54 that stuck out when I read it for the first time: “I started out as an idea, but I ended up something more.” It feels like it’s fitting for the series, itself, as much as about Hazel. Saga has grown from its humble beginnings — sure, it’s always been a story as epic as it is intimate, but by this point in the series, it feels expansive both in terms of the canvas you and Fiona are working on narratively, but also the fandom surrounding it, and the impact it’s had on the industry. As you head into “the intermission,” have you taken stock of what Saga is now to you, and how that’s changed from what it was at its origins?

Hazel actually used that exact line in our first issue, back when I had no idea if Saga would survive in a marketplace that, at the time, didn’t seem particularly hungry for new ideas. I was always hopeful that Fiona and I would be able to finish our entire story, but no, we never could have dreamed that so many readers around the world would end up being so passionate about this comic. It’s unreal, and we’re beyond grateful.

So, let’s talk about the intermission. You mention in the announcement that this wasn’t a decision made lightly, but I’m curious about the decision in general. How long have you and Fiona been considering taking a break? Has this been something both of you have been thinking of for some time?

Yeah, it’s something Fiona and I first talked about a few years ago, when we were on a signing tour in France. I can’t think of the last comic artist who drew, colored and even partially hand-lettered every single panel of more than 50 consecutive issues, so I was first and foremost concerned about not killing Fiona.

Plus, Saga was almost entirely born during the longest break I ever took from monthly deadlines — after the final issue of [DC Entertainment series] Ex Machina came out in 2010 —and I wanted a similar sabbatical to clear my head and focus on making this next part of Hazel’s journey feel as new and different as Saga No. 1 hopefully felt when it hit stands in 2012.

What went into the timing, both in terms of, “We’re jumping off the schedule with No. 54,” and “It’s an indefinite hiatus, but at least a year”? This issue feels like an ending, and in that respect, it feels like a good — and also, as a reader, the worst — time to take a break. But also, “for at least a year” is at once an especially vague length of time, and a surprisingly specific one; why at least a year?

Because Image Comics is generous and moral enough to let writers and artists truly own and control their creations, Fiona and I have the luxury of not having to pump out product just to satisfy the financial needs of some corporation. All that matters is making the best comic we can make, and that takes as much time as it takes. It’s kind of an alien concept in the grueling world of monthly comics, but this kind of extended hiatus is obviously extremely common in film, literature, video games, whatever.

How has the response from the readership been to the announcement? Are you surprised by the way people reacted?

While they’ve been appropriately horrified by the events of this storyline, readers have been almost unanimously supportive of our intermission, I’m relieved to report.

Is Saga entirely gone for the intermission, or could there be special projects of some sort — a Fiona covers gallery with commentary, an ancillary book by guest creators, “The Official Handbook to the Saga Universe,” whatever — during that period?

Nope. We could put out some cash-grab Saga spinoff series that would help “keep us on people’s radars” during our absence, but I actually think it’s a healthy thing to just disappear sometimes, and give readers a chance to maybe miss your characters.

What are you and Fiona doing during the intermission? Not, specifically, in terms of other work, although that, sure, but what helps you both recharge for Saga in particular?

I don’t want to speak for Fiona, but I’m mostly going to hang out with my kids and steal more of their ideas. Also, I’m still hard at work on Paper Girls with Cliff Chiang, and the next few issues of that series will be at least as impactful as this last Saga storyline. I know Paper Girls doesn’t have quite the same heat as Saga, but I’m extremely proud of that comic, so I hope readers who haven’t tried it yet will consider checking it out while waiting for Hazel and company to return.

Back to the story, for one final question: In the announcement of the intermission, you go out of your way at two different occasions to reassure readers that the series is continuing; you talk about the need for the intermission to recharge batteries to continue the saga — no pun intended — and specifically say you know what the opening of No. 55 is already. Can you imagine that changing in the time between now and returning to the series?

I’m sure elements of the story will grow and change as Fiona and I discuss it over the next few months, but I’ve been very faithful to the original roadmap of major events I planned for Hazel’s family years ago, so I don’t anticipate any significant course changes.

OK, so now I have to ask a really final question: What is one thing you can tease about that opening page to No. 55?

Saga No. 54, the final issue before the series’ Intermission, is available now. Saga Vol. 9, collecting issues 49 through 54, will be released Sept. 26.