Continue to The Hollywood Reporter SKIP AD
You will be redirected back to your article in seconds
Skip to main content
February 28, 2017 9:00am
Logo text

In a cinematic world ruled by superheroes, space operas and sequels, the grandfather of all movie genres has been quietly resilient: the Western, which has seen four of the five highest-grossing films in the genre released in the last six years.

For Westerns, “everything’s magnified: the struggle, the serious choices, what you do, the bravery, all those things. I like and appreciate the ambiguity of telling right from wrong,” Jeff Bridges, star of the Oscar-nominated genre titles True Grit and Hell or High Water, tells The Hollywood Reporter.

After droughts for Westerns in the late ‘70s, ‘80s and ‘90s, filmmakers like Quentin Tarantino, the Coen brothers and Taylor Sheridan have helped reinvigorate the genre for new audiences. These “post-modern” Westerns helped usher a rise for production in the long-dormant genre, as this new decade-by-decade production tally by THR shows. 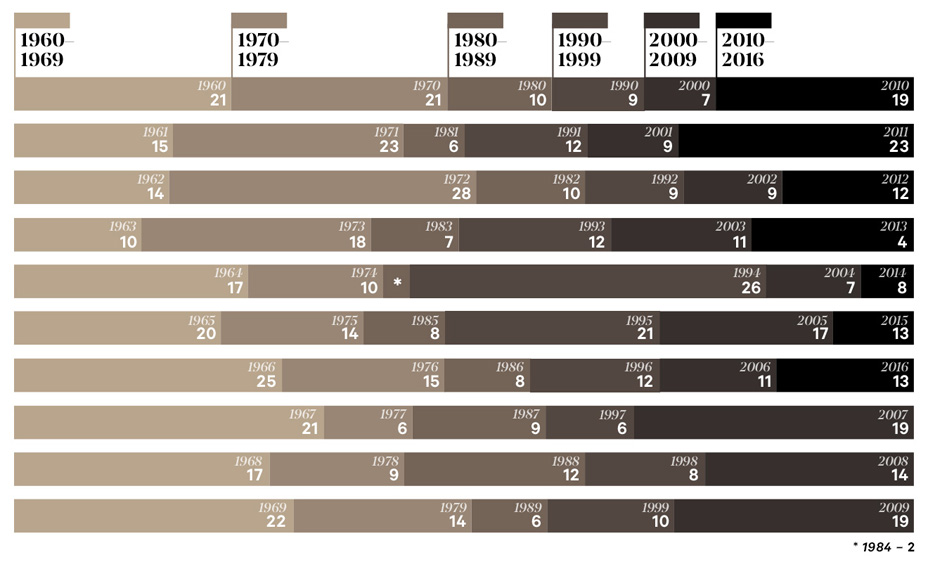 “A lot of people you wouldn’t think would be doing Westerns started doing them,” says Renaud Veluzat, owner of Melody Ranch in Santa Clarita Valley, a popular shooting locale for the genre with its rustic canyons, desert and, further out, the iconic Vasquez Rocks in Agua Dulce.

Veluzat, who acquired Melody Ranch with his brother in 1990, has hosted productions such as Django Unchained, Deadwood and HBO’s Westworld. “It was kind of interesting how that period kind of ballooned out of proportion since 1995,” he recounts.

The reimagining of the genre is something that filmmakers have done for decades. “The Western is really the bedrock that this industry was formed on,” Sheridan, Oscar-nominated screenwriter of Hell or High Water, says. “It’s funny, when people make a great Western they say it’s back. When someone makes a bad Western they say it’s dead.”

And, as it turns out, no other genre’s history goes back quite as far as that of the Western. 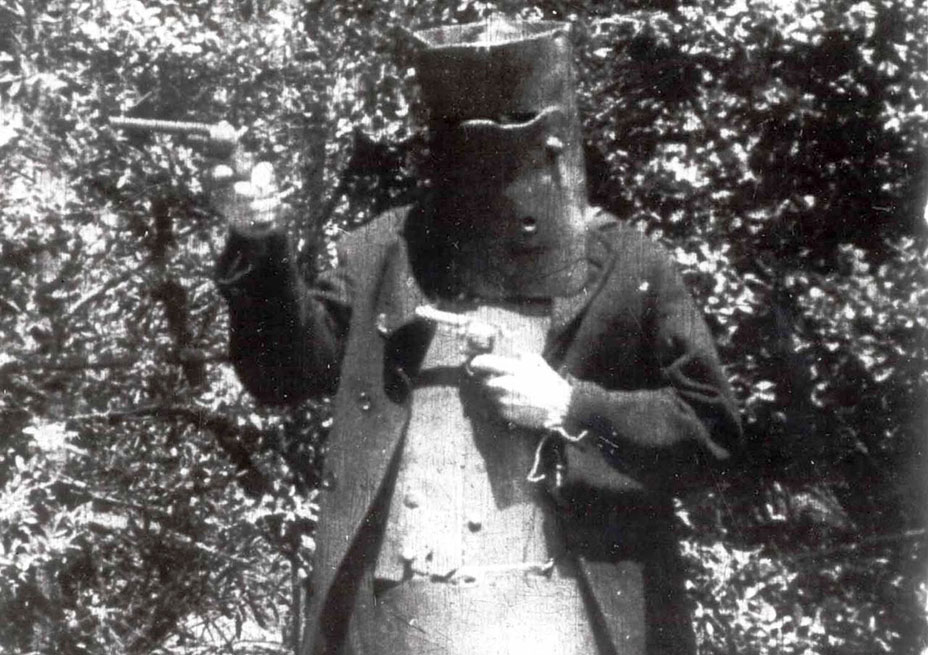 The first feature-length film ever released, as recognized by the United Nations Educational, Scientific and Cultural Organization, was the 1906 Australian production, The Story of the Kelly Gang, a Western following the exploits of real-life bushranging outlaw Ned Kelly, who was tried and hanged just 26 years earlier. While the film was set in the Australian outback, its deserted 19th century setting and subject matter laid the groundwork for the prototypical American Western to come, a milieu that dominated the medium from the silent era through the Golden Age of Hollywood.

According to documentarian David Gregory, “it has been estimated that up to 40 percent of all films made before 1960 were Westerns.” Stories of the gruff, stoic lawman defending his town from a gang of marauding bandits were the tale du jour in Hollywood’s formative decades, with stars such as John Wayne, Gary Cooper and Glenn Ford portraying strong, silent men of the badge who maintained law and order in an increasingly chaotic and disorderly world. 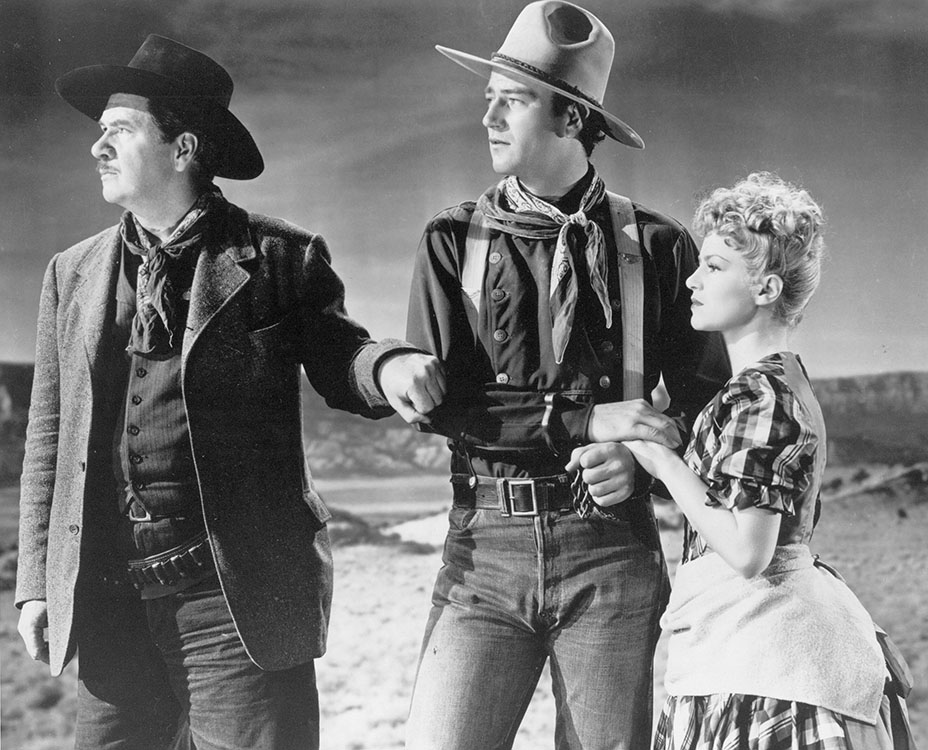 What emerged from this saturation of the market was a mythos that was quintessentially American. The films harkened to a period in our nation’s history when the notion of national identity was an unformed mass before the crucible of the Civil War melded America into one undivided country.

“If you look historically, the settling of the West was one of two events that really shaped the American consciousness: The Civil War and the expansion West, which is the beginning of the Industrial Age,” observes screenwriter Sheridan.

He adds: “It’s a place with no rule of law, a time when if you failed, you could just pack up and reinvent yourself West. Even Hollywood has a certain amount of that Western feel to it. In the 1920s, Hollywood was the haven of all these cowboys who lost their jobs on these ranches during the Dust Bowl and came out here.” 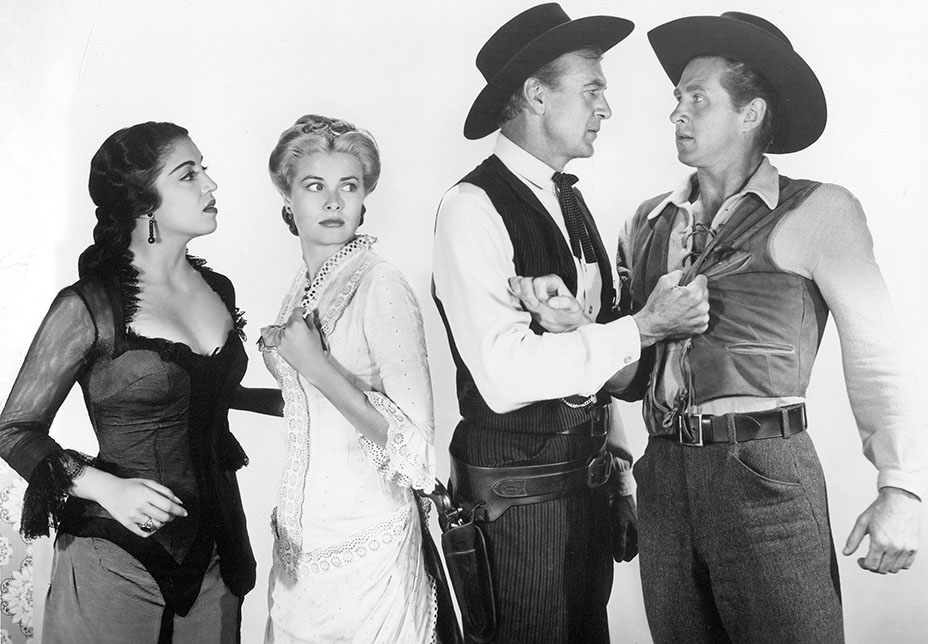 As the genre became well-trodden, the morality and ethos of the traditional Western became more malleable to reflect the civil unrest felt growing in America. High Noon (1952), for which star Gary Cooper won a best-actor Oscar, tackled the paranoia felt by many in Hollywood, and the nation at large, at the height of McCarthyism and the ensuing blacklisting of those labeled communists.

“There you have the moral problem of, ‘Do you stand there and face these guys that are coming in to kill you or do you take this beautiful wife and get out of town?’ and all those decisions,” says Bridges, whose father, Lloyd, starred in the film.

“In the Cold War there were kind of films on both sides of McCarthyism. John Wayne is kind of pro-McCarthyism, [High Noon] was anti,” says Josh Garrett-Davis, assistant curator at the Autry Museum of the American West in Los Angeles. “You can have that kind of debate within the Western. I think when you make a Western you’re always trying to make a claim to ‘What is America.’”

By 1960, the Western antihero had taken hold at cinemas for American audiences with The Magnificent Seven, featuring an all-star lineup of mercenary gunslingers. “About two-thirds of the film is good, tough, unromantic period western,” wrote THR in its appraisal of the title that year. “In adding so-called commercial values, a good picture has been sabotaged.” 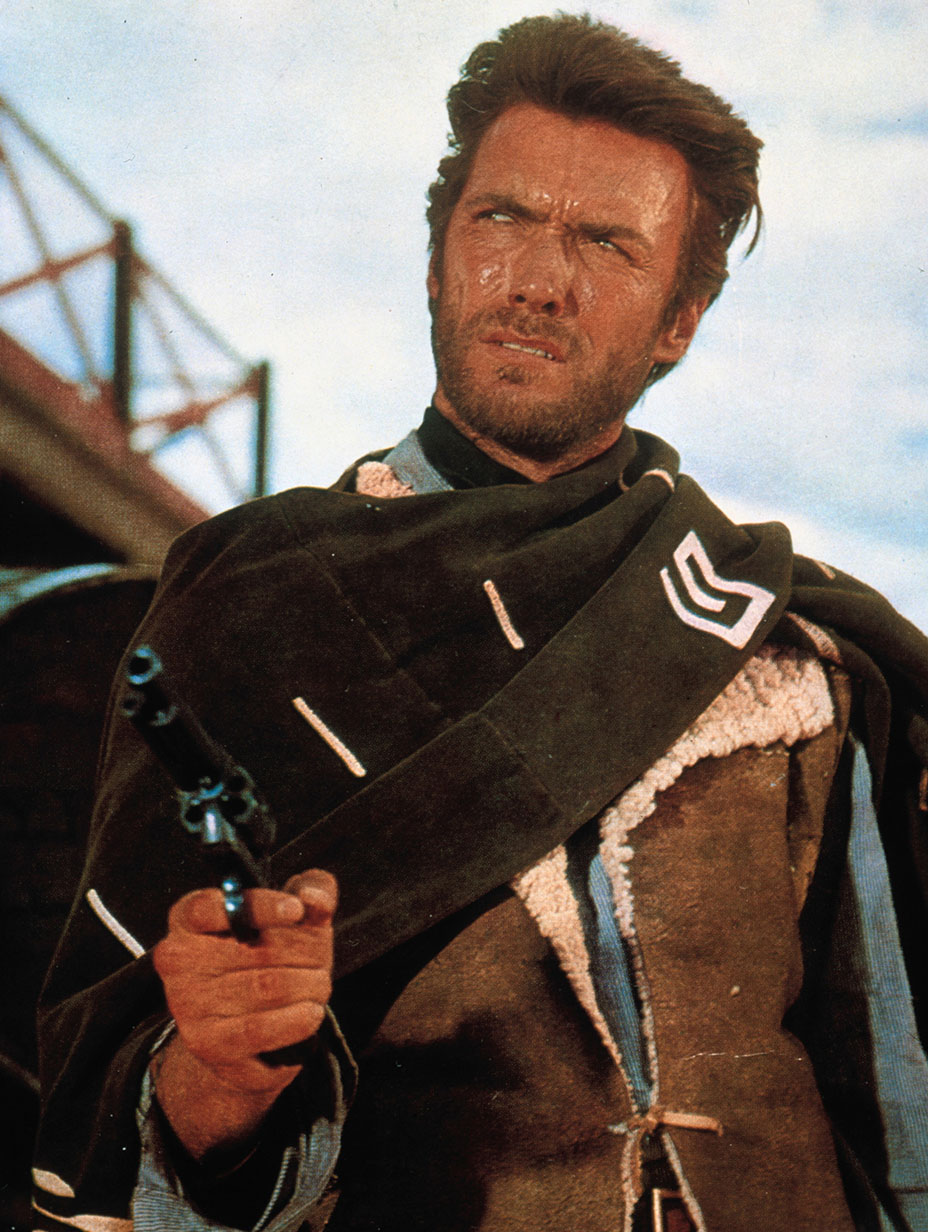 Clint Eastwood and Italian filmmaker Sergio Leone’s Dollars trilogy solidified the trend. The first entry in the ultra-violent series was filmed in 1964, the same year the Civil Rights Act was passed and just months after President John F. Kennedy was assassinated. “In the ‘60s there was a rebellion against the earlier films [in the genre] and then sort of the revisionist Westerns through the ‘70s,” Sheridan notes.

The so-called Spaghetti Western films reflected the tumultuous times by upping the violence, muddying the waters of morality and moving the racism and marginalization of the setting’s time period to the forefront. And, in pop culture, 1969’s Butch Cassidy and the Sundance Kid marked a high point for the genre, collecting four Oscars and earning critic and audience approval for its “joyous contemporary spirit,” as THR wrote about the film in its review that year.

However, as the social turbulence of the 1960s began to subside, the interest in Westerns subsided. Production on the genre in America waned in the 1970s, a trend that only worsened in the 1980s, which saw the least amount of films in the genre produced of any decade.

“One thing you might be able to make a parallel with is the end of the Western’s dominance of the market in the late ‘60s and what historians point to in the early ‘70s as a turning point, both historically and culturally, as the things we now see as inequality started to increase instead of decrease,” says curator Garrett-Davis. “Compare that with when America had saved the world from fascism in WWII and we were manufacturing things for the whole world. [The Western] was a product of that era.” 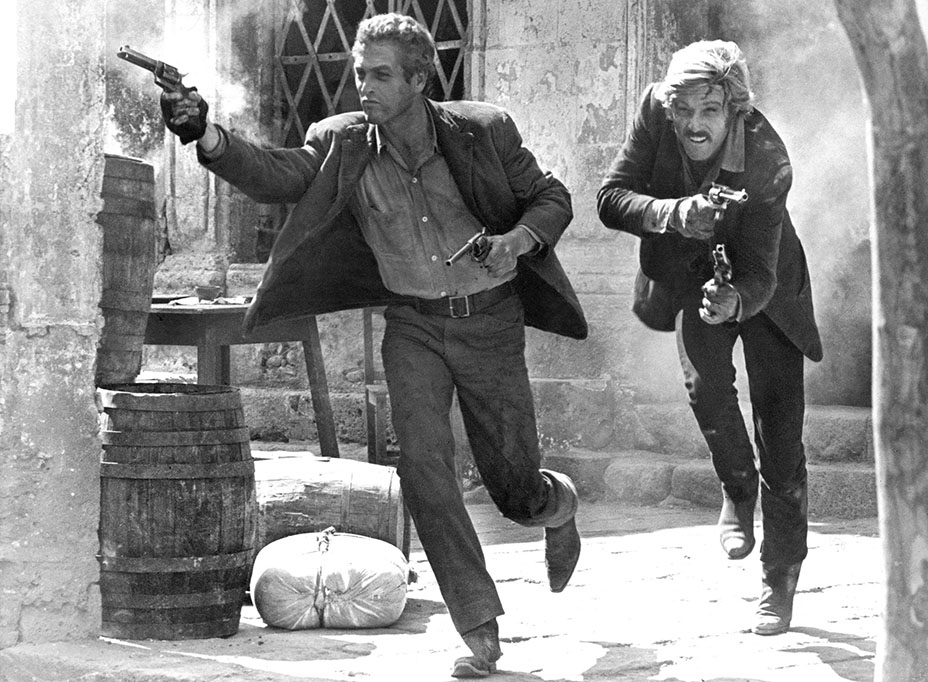 Following the production drought of the ‘80s, the beginning of the 1990s witnessed a brief resurgence of the genre. Over a three-year-span Kevin Costner’s Dances With Wolves, Eastwood’s Unforgiven and director George P. Cosmatos’ Tombstone roused up major box- office earnings, the former two winning Oscars for best picture. With Unforgiven, Eastwood, who had been one the genre’s brightest stars, claimed he wanted to “bury the Western.”

“I think he did,” says Sheridan. “I personally find Unforgiven as one of the three best movies ever made. Just an incredible film, and yet [the genre] keeps surviving.”

“What I see in the recent [Westerns], like the Tarantino movies, True Grit, even No Country for Old Men, is they’re kind of meta. They’re doing the genre as a genre,” curator Garrett-Davis explains. “A lot of the most artistically interesting and critically successful films recently have that sort of post-modern or meta level where you’re commenting on it as a genre.” 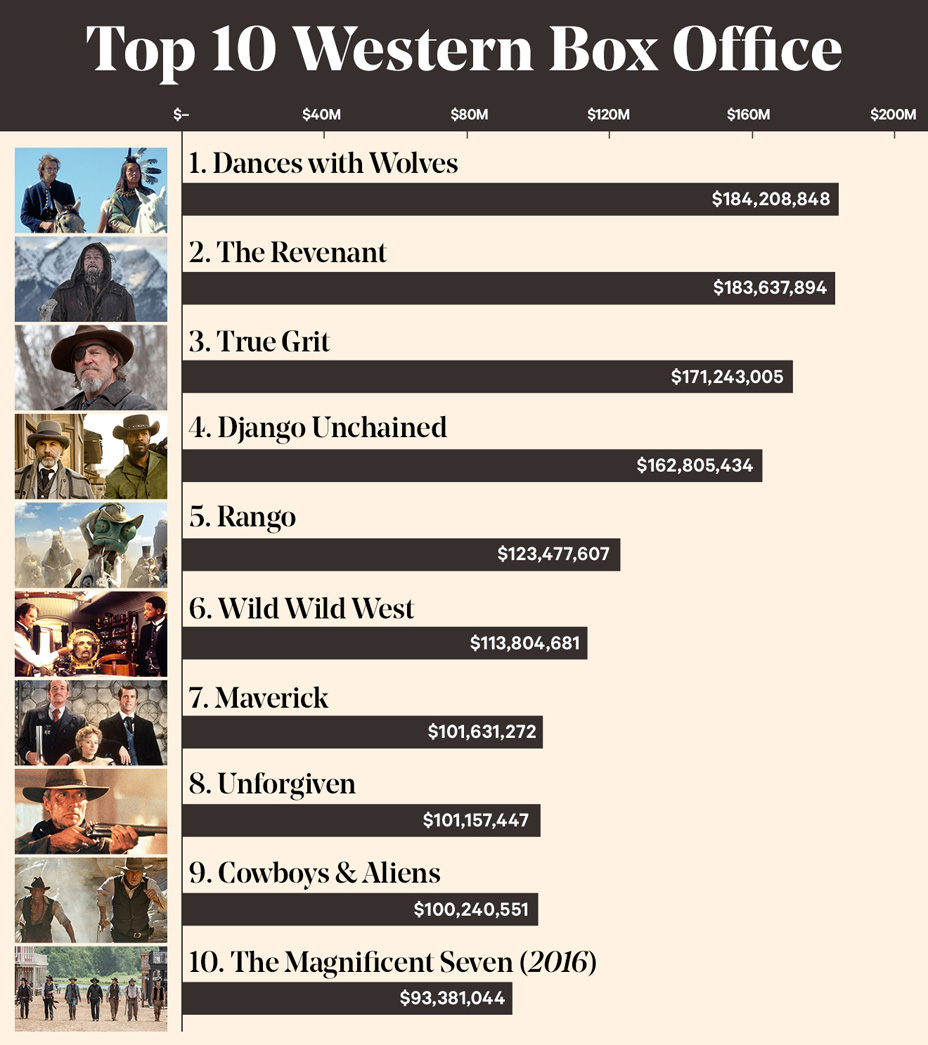