For Regina Hall, one thing stuck out about working with Samuel L. Jackson on Shaft. Hall plays Mya, the ex-wife of John Shaft II (Jackson) in the new film, and she found her co-star didn’t just learn his own lines.

“What’s interesting about him, he even knew my lines and that means he knew everything,” she tells The Hollywood Reporter.

Shaft comes from filmmaker Tim Story, and sees Hall play, Mya, the ex of Shaft (Jackson). She and Shaft have a child together, John “JJ” Shaft, Jr. (Jessie T. Usher) but separate when his profession puts JJ in danger.

Like in her ’80s-set Showtime comedy series Black Monday, Hall also got to wear peak ’80s fashions in the beginning of Shaft. She says the wardrobe helps her frame her performance.

“No matter what series I’m in, even if it’s present day, wardrobe always helps me profoundly,” Hall notes.

As Dawn Darcy in Black Monday, Hall fully immerses herself in the era, even donning the most extreme looks.

“When [the makeup artist] was doing my makeup, I forgot how serious the blush was,” she says with a laugh. “And I was like, ‘Wow, you are really doing a lot of blush.’” 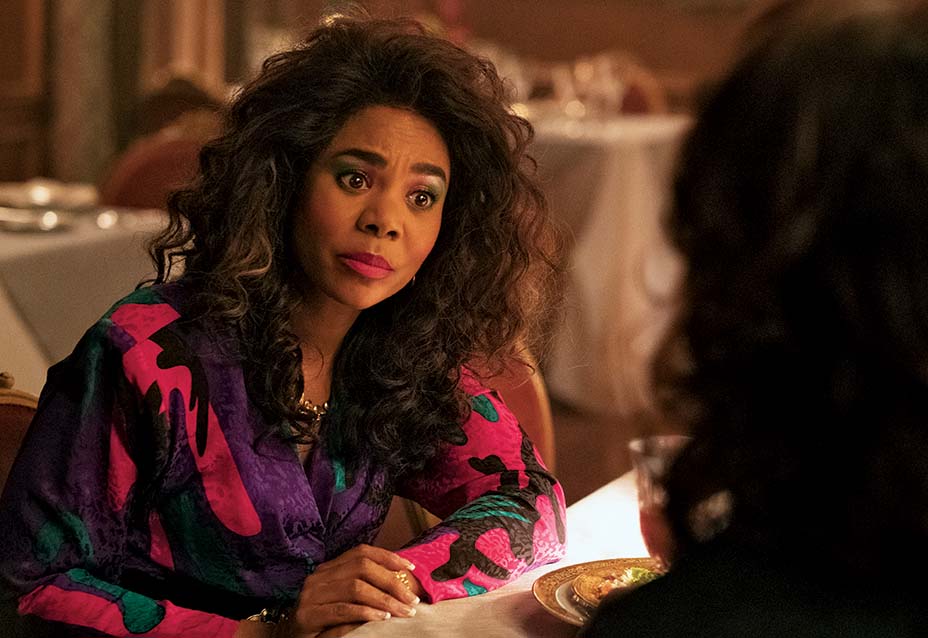 Dawn came into Hall’s life at a time when she wanted to find a character that “was her own being.”

“She’s connected to all the characters, but she has her own story, her own self, everything about her, it stands on its own, it’s not necessarily in relationship with someone else,” Hall says.

Hall has gotten the opportunity to let loose in Black Monday, which centers around the 1987 stock market crash.

“It’s great to be funny and be debaucherous and kind of be like one of the guys unapologetically,” Hall says.

Hall is no novice to the comedy space, having a varied career in the genre, including the 2017 hit Girls Trip. Later this month, she’ll be taking her comedic chops live when she hosts the BET Awards on June 23. There’s an obvious difference between comedy, with the grace of multiple takes, versus in front of a live audience. Hall is preparing for this by trying not to think about that difference. She notes her goal is to entertain those in the audience and at home.

“I’m trying to figure out what is my way into that. Obviously, I’m not a stand-up and I’m not a musician either. I’m pulling together so that I can have something,” Hall says. “The producers have been really great, we’ve been going through ideas and they’ve been really supportive.”

Shaft is in theaters Friday.