[Warning: This story contains spoilers for The Shape of Water]

Most Hollywood depictions of disability tread the same well-worn path: a person — usually white, straight and male — is struck down with a disability in adulthood and must learn to cope with a growing sense of bitterness. The plot is focused on being disabled, and when sex is present, it’s generally used as a source of humor or a reason for the person to shuffle loose the mortal coil. A prime example is Sam Claflin’s paralyzed character in Me Before You, who essentially chooses to die in part because he can’t have sex with Emilia Clarke’s character Louisa Clark.

As a film writer with a physical disability, I find it hard not to feel personally offended by movies that reiterate that disabled people aren’t sexual. It’s even worse being a woman with a disability, where the lack of actresses playing disabled characters leaves one to question if Hollywood thinks disabled women can’t be sexy at all. But watching The Shape of Water gives me hope that maybe barriers can be broken down regarding sex and disability.

Sally Hawkins’ mute heroine Elisa and her sexuality are at the forefront of a film that examines disabled relationships, fears and the frustration of finding love with a Gill-Man.

Guillermo del Toro’s decision to write a female heroine is unique from the perspective of disabled representation in cinema. The majority of disabled narratives focus on men, with the implication being that male perseverance is something to behold, to be inspired by. This year alone saw Jake Gyllenhaal play a Boston bombing amputee you root for in Stronger, while Andrew Garfield “inspired” audiences as Robin Cavendish in Breathe. But it’s rare finding female-led corollaries in mainstream Hollywood cinema. The closest comparisons to a character like Hawkins’ strong disabled woman with agency is found today mainly in the horror genre. Fiona Dourif’s character in two Chucky films, Curse and Cult of Chucky, is the rarest of rare disabled characters: a female disabled from birth. While the 2016 Mike Flanagan horror film Hush has a deaf female heroine triumphing over a killer.

Though there isn’t enough written on the gender disparity in films about disability, it could be argued that, similar to “ugly duckling” narratives like She’s All That, the lack of disabled female characters stems from questions of how to deal with their sexuality; that women who are disabled aren’t “hot” (a reductive assumption easily disproved by Keah Brown’s popular #DisabledandCute hashtag).

These invented barriers abound in the 1960s world Elisa lives in, a world where racism and homophobia are also prevalent. Elisa isn’t the only outcast, but is part of a trio alongside her gay best friend Giles (Richard Jenkins) and her African-American coworker Zelda (Octavia Spencer). The difference between Elisa and her friends is that her muteness literally strips her of a voice in a way that goes beyond the physical. Even though Elisa can communicate with sign language, her friends often ignore what she’s communicating. Despite their kind hearts and obvious love for Elisa, her friends can’t resist their own internal ableist tendencies, particularly where relationships are concerned. Giles makes Elisa go with him to the local pie shop so he can pine over the waiter, refusing to listen to Elisa’s desire to not eat there. Zelda bemoans the state of her marriage to Elisa, though she likely never believes the mute woman will marry at all. In each case Elisa’s agency is stunted, subsumed, but never diminished.

That brings us to the Amphibian Man (Doug Jones). The idea of equating the monstrous with the disabled isn’t new to storytelling. In many ways, it’s seen as the easiest way to depict disability — by creating something wholly “other” from what viewers perceive as human. Yet this separation limits how audiences see disability. This is what makes Strickland’s (Michael Shannon) story of how man is created in “God’s own image” so poignant. In his mind, “God’s image” means white and male, but on a broader level he also unspokenly means able-bodied, as well.

Elisa and the Amphibian Man don’t conform to Strickland’s idea of God’s image, but their relationship allows them to find acceptance within each other. The pair, who communicate via sign language, are able to talk to each other as opposed to having able-bodied conduits speak for them. Elisa’s and the Amphibian Man’s sexual relationship takes on an added layer of taboo, when one considers how rare it is to see characters with disabilities having healthy sexual relationships at all onscreen. Up until now examples have been limited to projects like 1976’s Coming Home and 2012’s The Sessions which, once again, focus on disabled male figures seeking sexuality. 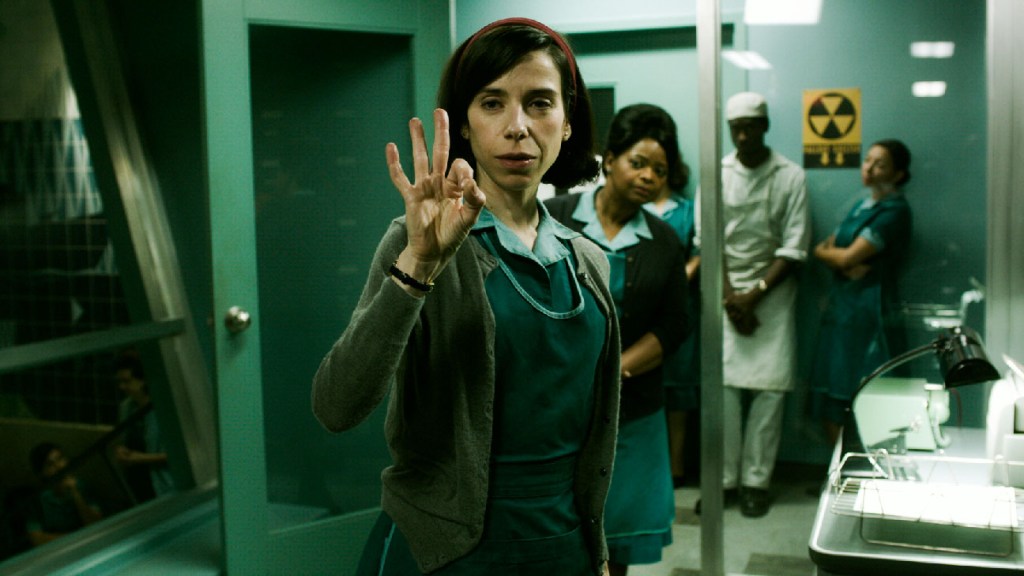 When Zelda asks Elisa to explain the logistics of how sex between them works, her question takes on a tone that’s likely relatable for those in the audience who are disabled. An unfortunate but chronic question able-bodied people ask the disabled in real life is, “How do you do it?”

Beyond questions of sex and romance, The Shape of Water also sheds light on issues of harassment and disability. Strickland finds himself increasingly drawn to Elisa because of her silence. Cornering her in his office, he tells her he “doesn’t mind” that she can’t talk, and all but states his desire for a sexual relationship. This moment is the perfect encapsulation of the film’s understanding of disability, melding it with the universal female fear of harassment and sexual assault. Strickland and many abusers of the disabled use language like “I don’t mind,” when speaking of their victims’ disability. Per a 2017 study conducted by the Bureau of Justice Statistics, the rate of “violent victimization” — i.e., rape, sexual assault, robbery, etc. — is three times higher for a woman with a disability than a woman who doesn’t have one. For Strickland, he is the only one who needs to give consent. People like this character are white knighting themselves, claiming to see beyond their victims’ disability while simultaneously underscoring the increased feelings of power and control they derive from a victim they presume can’t fight back. To the able-bodied Strickland, Elisa should be grateful for his interest in her, since in his mind, he is the only one who perceives Elisa in a sexual context.

Like many of del Toro’s past works, the only way for Elisa and the Amphibian Man to find true liberation, and remain together, is to completely excise themselves from society.

In a way, this undermines the film’s treatment of disability. But the early 1962 time period makes too much progress seem perhaps too unlikely. The audience is left to question if, in 55 years, we’ve become better and more accepting of people — specifically people with disabilities. In regard to the film, those with disabilities are seeing an uptick in media depictions, but the lack of sexuality associated with these characters is telling. Del Toro compels the audience watching to look closer at what defines all of us in the arena of sex and love, regardless of ability.

'The Shape of Water': Why Are Monster Romances So Appealing?