To try and explain why this week’s new superhero movie from Warner Bros. is titled Shazam! while the Marvel Studios release a couple weeks ago was Captain Marvel would involve detailing a decades-long string of copyright infringement lawsuits involving three different comic book companies and several characters.

Shazam! stars Zachary Levi as the heroic incarnation of orphan Billy Batson (Asher Angel), a young boy who has been chosen by an ancient wizard to embody the wisdom of Solomon, the strength of Hercules, the stamina of Atlas, the power of Zeus, the courage of Achilles and the speed of Mercury. The story of a teenage boy who retains his own personality even when he says the magic word and gains superpowers has been described by Hollywood Reporter reviewer Frank Scheck as, “Like Big on steroids.”

With an opening weekend estimated to bring in between $45 and $55 million, Warner Bros. and DC are hoping lightning strikes at the box office as it brings an unconventional superhero story to theaters. To bring people out it has mounted a campaign that has played into the character’s hopefulness and playfulness, focusing on the wish fulfillment of being able to turn yourself into a hero but also the responsibility that comes with it.

Surprisingly the first teaser poster debuted all on its own, when usually these assets are accompanied by a teaser trailer — or at least an announcement trailer — of some sort. Regardless, it doesn’t show much, just the title treatment of the hero’s name, complete with a lightning bolt as the “z” in the middle. The movie’s Brazil Comic Con poster showed Billy transforming into Shazam, both incarnations smiling like a kid having a great time on an adventure.

The next domestic one-sheet (by designer cold open) has Shazam, in full hero regalia, leaning up against the wall and chewing bubble gum while texting, a great representation of how he’s a kid in a grown up’s very powerful body.

IMAX’s exclusive poster (by Concept Arts) featured Shazam having just visited the concession stand and taken his soda and popcorn to the top of a building just because he can. The Dolby poster (by cold open) showed Billy Batson standing on the ledge of a building’s roof while his shadow showed his heroic alter ego, a nod to the power within just waiting to be unlocked.

One final theatrical poster shows both Billy and Shazam contained in the lightning shape of his symbol, both looking up aspirationally with the skyline of the city below them. Users of the Regal Cinemas mobile app could scan the poster in theaters and unlock exclusive artwork and be entered into a sweepstakes at the same time.

The first trailer (41.4 million views on YouTube) debuted at San Diego Comic-Con last year, providing audiences the basic outline of the character, though it went a little light on story. We meet Billy as he’s being placed in a new foster home. After an altercation with some bullies, Billy boards a train that winds up taking him to the home of a strange wizard that imbues him with superpowers and turns him into an adult when he says the magic word.

Early March brought the final trailer (13 million views on YouTube), continuing the meshing of action and body-swap comedy. Again, it starts with Billy being given his powers, at which point he starts experimenting with what he can do, something he’s not particularly smooth at, causing as many problems as he solves. We see him foil the convenience store robbery and both face off against and seem to get advice from Dr. Sivana. 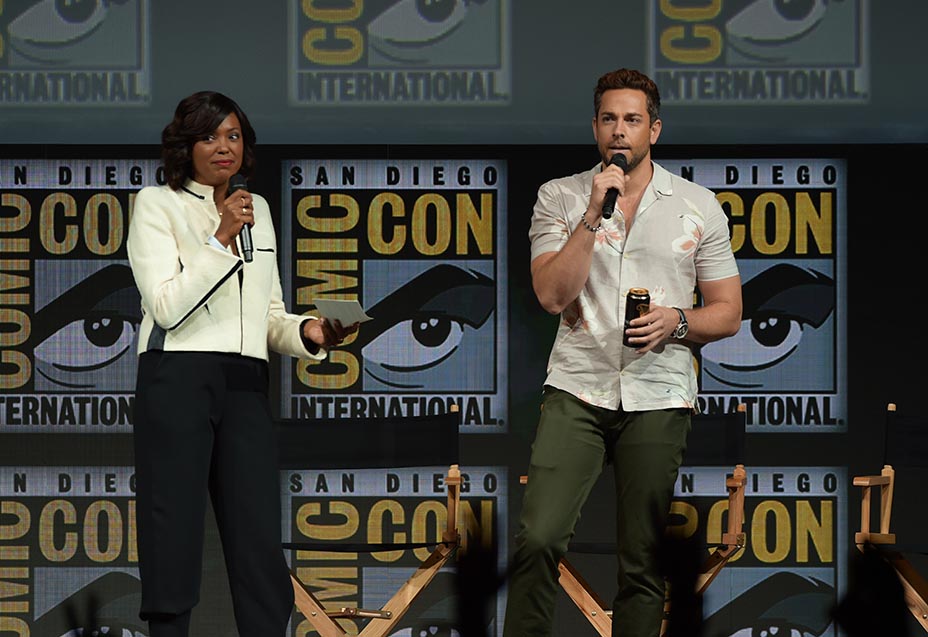 The movie was announced near the launch of San Diego Comic-Con 2017. In early 2018 Warner Bros. brought some early, work-in-progress footage to CinemaCon and then CineEurope, giving exhibitors and other industry executives their first look at the anticipated film. A few months later the studio brought it to San Diego Comic-Con with a presentation that included a cast Q&A along with the debut of the first trailer, which was somewhat of a surprise. While there, Levi joked about the similarity in the character’s name to another superhero movie. as well as what had him excited about the role. Director David Sandberg also clarified that no, there would be no mention of the hero’s original name in the comics.

Levi appeared later in the year at New York Comic Con to talk about the movie and play up the big story fans could expect. Mid-January saw the release of an extended TV spot which mixed some of the humor seen in the first trailer with more action and actual heroics.

Around that time DC announced a new Shazam! title coming soon from superstar comics writer Geoff Johns, the first time the character would star in his own series in several years. A behind-the-scenes featurette from early February had Levi, Angel and others talking about the character and what motivates him, as well as the story and its magical aspects. DC then shared a video of Levi checking out some of the toys and figures hitting shelves based on his look in the movie. WB teased an exclusive look at the movie that was included on the recent home video release of Aquaman.

Fandango announced VIP members could get tickets to advance screenings two weeks prior to release, screenings that brought in $3.3 million, more than other such screenings for recent films, and helped create more positive word-of-mouth for the movie.

Posters placed in New York and Los Angeles sported Snapchat’s first voice-activated Snapcodes. Users who opened the Shazam-sponsored lens could transform into the hero when they said “OK, Shazam!” Also on social media, sponsored stickers could be added to your Instagram Stories while using “#SHAZAM” on Twitter added a sponsored lightning bolt emoji to your posts.

TV spots from Imax encouraged fans to see it in that format to help get an even bigger and more epic story. Commercials from Warner Bros. emphasized that this was the most fun superhero movie you’ll see, a message meant to continue setting it apart from the grim, depressing tone of other DC-based films.

DC gave the movie prominent promotional placement, using the key art of Shazam leaning against a wall while texting on the back covers of its comics in recent months, and including the title and release date on the front covers of those books. It used that same art as one option at the greenscreen photo booth it hosted at conventions like C2E2 and WonderCon.

Outdoor and online ads used variations on the key art, either focusing just on the title or showing Shazam having a bit of fun with his incredible powers. Some of the online ads also included not only a link to buy tickets or find out more information but also mention of the movie having achieved “Fresh” status on Rotten Tomatoes. That accomplishment was used in a Promoted Tweet just prior to release.

Positive social media reactions started coming in a few weeks ago, the day before Marvel’s Captain Marvel hit theaters, a nice bit of timing. Throughout March, Levi and others from the cast engaged in a world tour, including stops in cities across the U.S. and then a promotional event in China before coming home for the red carpet premiere.

An online ad released about a week prior to the movie coming out starts out as if it’s promising the first trailer for Aquaman 2 but eventually sells Shazam as a fun time at the theater.

Fandango offered an exclusive clip showing Billy in Shazam form explaining his secret and confusing those around him. Another exclusive clip came from IGN, with Shazam encountering his first supervillain and the confrontation not going well. Complex hosted a clip showing Shazam having a rough time discovering what his new abilities and powers are.

Imax released one last promotion promising audiences could “Transform their experience” by seeing the movie in the larger format. The “Robot Chicken” team produced a sponsored video that recreated scenes shown in the trailers but in an exaggerated manner and in the show’s trademark stop-motion style. 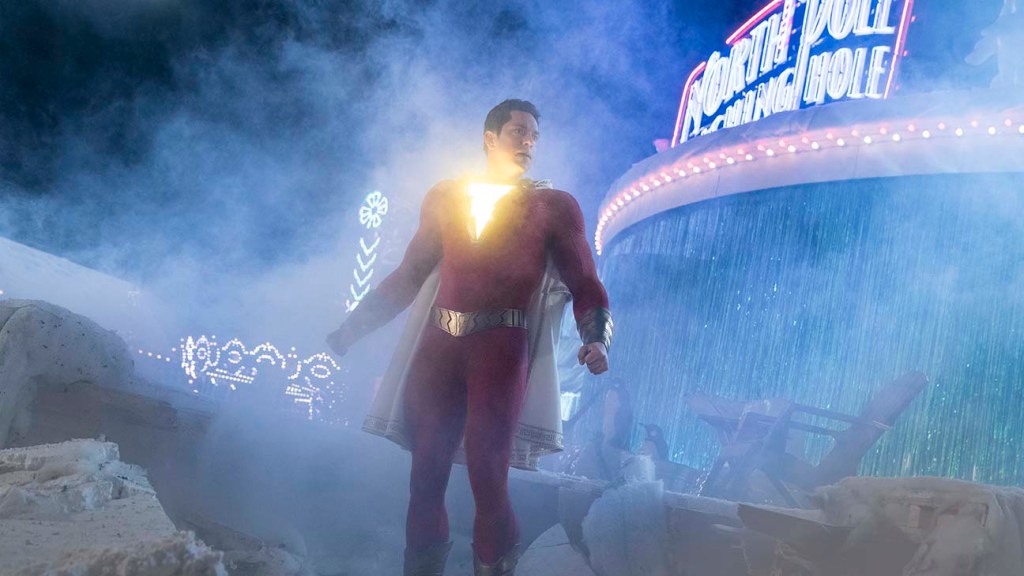 Fun and light entertainment are the main themes Warner Bros. has woven throughout the movie’s campaign, while still conveying the basics of the hero story Shazam is the central figure in. That’s in keeping with the tone that’s been struck with the character since he was relaunched by writer Geoff Johns and artist Gary Frank in 2012, a relaunch that inspired the look — particularly the costume — featured in the movie as well.

It’s a tone and attitude that is very specifically meant to be different from that of movies like Justice League, Batman v Superman and Suicide Squad, which while successful financially, have been criticized for being dark and depressing, with grim and nihilistic versions of the heroes on display. Wonder Woman and Aquaman have been more upbeat, but this takes it a step further from heroics to childlike wonder at having unimaginable powers.

To reinforce all that, the ads, trailers and other materials have utilized quotes from early positive reviews to make sure the audience gets the message this will be quite different from the grim/dark DCU that has come under fire from critics and which stands in stark contrast to the bright and shiny Marvel Cinematic Universe.