For Shazam!, composer Benjamin Wallfisch took a page out of Superman’s playbook.

“David and I were at dinner when we really dug into the template for what Shazam!’s score would be,” Wallfisch tells The Hollywood Reporter of its inception.

Sandberg was a big fan of the 1970s and 1980s blockbuster films and their scores, specifically John Williams’ Superman work and Alan Silvestri’s Back to the Future score.

“We both loved those scores, I know I wore out a lot of vinyl listening to them,” Wallfisch recalls.

While the film’s setting is modern day, Wallfisch noted that the character comes from the Golden Age of superhero comics.

“This is a character from the 1940s, and David and I wanted to honor that classic feel with a score that feels like it could’ve been written 30 years ago,” he says.

Shazam! opens with the young version of Dr. Sivana being tested by the Wizard (Djimon Hounsou). The young Sivana proves unworthy of the powers of Shazam, and this rejection leads to a lifelong fascination with the Wizard, his lair and the power that Sivana believes he deserves. The powers of Shazam are ultimately granted to Billy Batson (Asher Angel and Zachary Levi), an orphan boy bouncing from foster home to foster home in Philadelphia.  Billy is constantly on the run, searching for his mother who seemingly lost him in a crowd. Billy’s encounter with the Wizard sets him on a path of self-discovery, where he learns what it takes to be a hero and the true meaning of family.

Shazam!’s score was recorded in London with a 140-piece orchestra and choir, a choice the composer, director and studio made to honor the classic 1980s scores.

“The massive scale and sound we captured came directly from having so many musicians playing together at once,” Wallfisch says.

Wallfisch enjoyed the opportunity to score something light and comedic in comparison to the numerous horror films he’s worked on over the years.

“When scoring horror, it’s all about the timing and the give and take of tension and release,” Wallfisch says. “With Shazam!, there’s such subtlety to the comedy that mixes in with the adventure aspects. It’s also a coming-of-age movie in a way, so there were a lot of elements to balance. We actually have seven main character themes in the film.”

“It was a very minimalist approach for the antagonist,” Wallfisch says. “It was the only time in the film that we weren’t utilizing the whole orchestra.”

Wallfisch visited the “Rock Of Eternity” set in Toronto early during in the shoot, and the detail and production value allowed Wallfisch to get a sense of the film that Sandberg and New Line were crafting. Later, seeing the finished project further enhanced his view of the film.

“The first time I saw the film was with a test audience, and that gave me even more insight into the film, the audience really took to the uplifting nature of Shazam!,” he says.

Wallfisch envisioned melodic themes that were full of energy and uplifting, to match the crowd’s reaction.

“My favorite moment in the score is when Billy realizes who his real family is, and that they need his help,” Wallfisch says. “It’s the lead up to the moment in the trailer when he leaps off the building … it’s so powerful.”

Wallfisch will be back in theaters this weekend with Hellboy, and over the past few years has worked with Hans Zimmer on the Christopher Nolan’s Dunkirk and Denis Villeneuve’s Blade Runner 2049. He also scored the 2017 horror hit It and is hard at work at the sequel, due out in September.

For It: Chapter Two, Wallfisch plans to keep the main themes from the first film, but he promises several new cues as the film takes place 27 years later and the Losers’ Club members are now adults with plenty of new experiences.

“We’re going with a larger sound, and trying to make the earlier themes sound more evolved,” Wallfisch says. “I’m exploring all that now.” 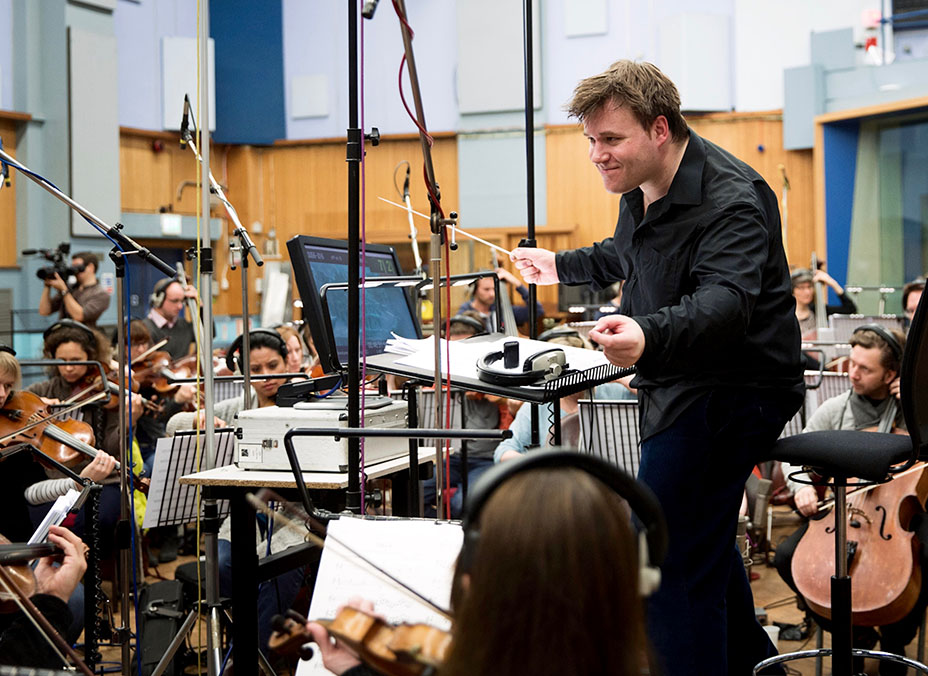