Italian director Stefano Sollima had big shoes to fill with Sicario: Day of the Soldado.

Opening Friday, the film is a follow-up to Denis Villeneuve’s acclaimed 2015 drug cartel thriller that impacted Hollywood in ways unexpected for a project that was only a modest box office success. It earned $84 million on a $30 million production budget, but Sicario‘s mass critical praise and positive word-of-mouth continued to build beyond its theatrical release and saw the film receive three Oscar nominations, including for cinematographer Roger Deakins and late composer Johann Johannsson, who died suddenly in February.

Sicario’s success catapulted many of its existing stars and filmmakers, while further introducing newer talent to mainstream audiences including Get Out’s Daniel Kaluuya and screenwriter Taylor Sheridan. Emily Blunt became a bonafide and bankable lead actor, while Villeneuve’s work on Sicario and his follow-up Arrival put him on the shortlist for seemingly every desirable project in town, ultimately leading him to make Blade Runner 2049 and sign on to Legendary’s high-profile Dune adaptation. While neither Blunt nor Villeneuve are returning, co-leads Benicio del Toro and Josh Brolin are coming back with even bigger profiles after going off to play in the billion-dollar sandboxes of Avengers and Star Wars.

Looking at how Sicario impacted Hollywood, it’s fair to say that most filmmakers would be overwhelmed by the idea of following in its footsteps. But once Sicario: Day of the Soldado producers pitched Sollima a standalone anthology film — versus a direct sequel — he couldn’t wait to take on the challenge.

“Oh, I wasn’t intimidated at all,” Sollima told Heat Vision, quickly adding, “To do this job and to do it well, you have to be a little bit crazy.”

During his press tour for Blade Runner 2049, Villeneuve noted that one of his requirements for doing the film was that original director Ridley Scott wouldn’t be looking over his shoulder, despite his respect for the legendary filmmaker. Villeneuve paid it forward on Soldado, thinking it wouldn’t be right for him to be looking over Sollima’s shoulder either.

“I never had a conversation with Denis about Soldado, but he sent me a beautiful email the day before I started shooting. Every director is like a fingerprint; we’re all unique,” says Sollima. “Since I run two television shows [Gomorrah and ZeroZeroZero], I often have immensely talented directors around me, and I never try to give them advice. I just try to create a healthy environment where they can express their own creativity. I believe this is the best way to successfully collaborate. So, I absolutely appreciate the respect Denis showed me.”

In a conversation with Heat Vision, the filmmaker also shares what he knows about Sicario 3 and his thoughts on deleted scenes for the home entertainment release.

When you were first asked to direct a follow-up to Sicario, a film that set the bar so high thanks to the mastery of Denis Villeneuve and Oscar winner Rogers Deakins, were you intimidated at first or were you motivated by that very bar your peers set?

No, I wasn’t intimidated because Taylor’s script was the kind of movie I love to watch in theaters — and love to make as a filmmaker. I really didn’t struggle with the decision. Out of respect for Sicario, the only thing I asked the producers was that I have the ability to find and choose a completely new crew. I felt this was the only way to make Soldado a standalone piece, a goal the producers also shared.

Screenwriter Taylor Sheridan has become a force of nature in just three years since Sicario’s release. What kind of conversations did the two of you have in order to honor the script while still adding your own signature to it?

We condensed the script’s narrative arc in order to preserve and pronounce the soul of the movie. The script was a bit wider in scope at first. Then, we organically pit the two lead characters [played by Benicio del Toro, Josh Brolin] against each other, something that wasn’t present in the first draft. Story-wise, I felt it was a really important and interesting turning point. It was also a way to go deeper into the exploration of these two characters. 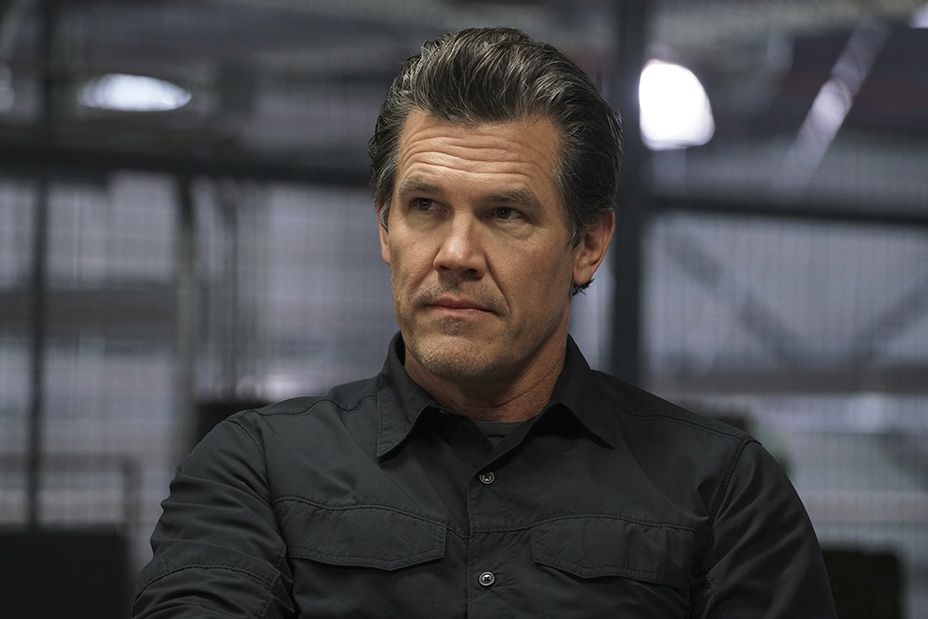 Day of the Soldado is your first Hollywood feature, more specifically your first English-language film. How would you describe the experience in comparison to your Italian projects?

My last Italian project, Gomorrah, adds subtitles, in Italy, because the dialect is Neapolitan. So, Day of the Soldado was a chance to direct another foreign language movie (Laughs). For me, Soldado was an amazing experience because I didn’t lose my touch. By committing to a Hollywood project with a bigger budget and higher pressure, the only thing I was worried about was losing my personal approach towards filmmaking. Despite the risk, this was a unique and beautiful experience because I didn’t lose anything in the transition to English-language filmmaking.

Ridley Scott’s cinematographer Dariusz Wolski was your director of photography on this film, and the photography the two of you achieved is stunning yet distinct from Sicario. Knowing you had to follow in the footsteps of Denis Villeneuve and the legendary Roger Deakins, what approach did the two of you agree to when it came to separating the look of your film from its predecessor?

I was a huge fan of Dariusz Wolski, and because of Ridley Scott, he also knew my work. While they were shooting The Martian, Ridley pushed Dariusz to watch Gomorrah because Ridley was a big fan of the show.

When I first contacted Dariusz, it was a super creative meeting. But, when you first start a project, you cannot obsess over what was already done. We had to respectfully ignore the previous work in order to achieve something completely different. Along with production designer Kevin Kavanaugh, Dariusz and I worked tirelessly on the color palette.

So, our biggest task was to design incredibly complex action sequences involving our main characters. For example, the mall sequence has a long tracking shot, and it gives you the impression that you’re experiencing the scene since there are no cuts. And because of Dariusz’s immense talent, the complex convoy attack was shot mostly from Isabela’s [Moner] point of view inside the Humvee. We created a really intricate rig inside the Humvee to achieve many of those shots during the crazy gunfight.

In New Mexico, where most of your principal photography took place, the weather can turn at any moment, especially during the winter which is when you shot. The altitude and dryness can also be a big adjustment for some. Were you prepared for this shooting environment?

On one level, you have to care about the weather conditions since they can influence your entire production schedule. But, I also don’t care because I want to shoot in real places. All the difficulties you endure during shooting, they stay in the frame so the audience will feel all of those struggles including the weather conditions. Because everything stays attached to the frame, perhaps the unexpected makes your movie better. Of course, it’s not easy to shoot when it’s freezing and you’re covered to the point where you can barely communicate with your crew.

While your entire cast is special, be it Catherine Keener or Isabela Moner, it’s led by Josh Brolin and Benicio del Toro. Now that you’ve been able to work with them on an intimate level, what did you take away most from working with veteran actors of their caliber?

It was a great experience. But in the beginning, it was also a little strange. During one of the first days of shooting with Josh and Benicio, I felt so conflicted because I’m huge fan of both of them. So, as we were shooting a simple scene, I would watch the monitor and part of me would say, “Whoa! You’re shooting with Benicio del Toro!” Then, you finish your fan moment because you have to go do your job as director. And once you come back to the monitor with Dariusz Wolski, you again find yourself saying, “Look at Josh Brolin! He’s so brilliant.” So, at the very beginning, I was split between director and film lover. But, they are such great human beings on and off set. No matter what you’re doing, the job cannot involve drama. After all, we’re shooting a drama, not living a drama. Aside from their evident acting skills, they created a wonderful creative environment for the supporting cast and crew.

On a sad note, the late, great Johann Johannsson’s seminal score provided Sicario with a magical quality that’s hard to describe, and the closing credits feature a dedication to him. After his sudden death in February 2018, it was later announced that Hildur Gudnadottir, would score Day of the Soldado. Was Johann attached to score your film until his tragic passing?

He actually wasn’t. We originally started with Hildur Gudnadottir, Johann’s cellist on Sicario and longtime collaborator. When Johann tragically passed, we had already completed the movie.

Gudnadottir created an intense score that maintained the spirit of Johannsson while adding her own signature to the franchise. She powerfully reprises Johannsson’s “The Beast” — a signature piece of score that features a string bass glissando that I’ve dubbed the “Sicario siren.” I can’t tell you how many times I’ve heard it imitated the last few years since it leads to instant tension and dread. It’s basically the new Inception “Bram.”

Yes! I chose Hildur because she’s a classical composer like Johann Johannsson. She also loves to play electronic music by way of real instruments. I think that was the key to a really interesting score.

How many minutes of deleted scenes do you anticipate having on the Blu-ray?

Five or six minutes. Not a lot.

Apparently, there’s a third Sicario film already outlined, perhaps even written, by Taylor Sheridan. Have you read anything yet? Would you be interested in returning?

I haven’t read anything yet. I know Taylor has something in mind for the potential third movie, but he hasn’t shared it with me yet.

Brolin and Del Toro have said many times that they have their own plan to get Emily Blunt back for the potential concluding chapter. I presume you wouldn’t mind working with her?

Sicario: Day of Soldado is in theaters Friday.