Perhaps the most surprising thing about the teaser trailer for Solo: A Star Wars Story — like the TV spot that teased it Sunday — is how dull it is. Not in the sense of “it’s not particularly exciting” — although that’s true as well, and I’ll come back to that — but visually: It’s filled with desaturated color, dimly-lit sparse scenes and moments that might be more dramatic if only you could properly see what was happening. (Oh no! They almost hit…something with teeth…in the clouds…maybe?)

It’s a visual aesthetic that harkens back to the previous Star Wars Story, 2016’s Rogue One. There, it arguably fit; that was the most dystopian, pessimistic Star Wars of them all, which made the lack of visual spectacle feel thematically appropriate. With Solo, however, that’s not as clearly the case. Surely, if Han Solo belongs in any particular look from the original movies, it should be the hive of scum and villainy of the Cantina of the very first movie, filled with colorful aliens and things happening all over the place. That busyness, the sense of danger and hustle, feels appropriate for Solo in a way that what’s on show in this first trailer simply doesn’t.

That disconnect between the audience’s existing ideas of who Solo is and what the prequel seems to promise based on the teaser runs throughout the trailers in terms of dialogue, as well; while Solo has always been filled with bravado, it’s nonetheless unexpected to hear him talk about wanting to be the best pilot — wouldn’t the Han we know just automatically declare that he is? — or seeing characters talk about being the only people who know who Han really is. Sure, part of the point of a prequel is to reveal hidden depths to the stories and characters everyone is already familiar with, but wasn’t part of the charm of Han Solo his lack of depth…?

It’s not as if this idea that Solo used to be an entirely different person is a new invention, of course; the Super Bowl TV spot raised eyebrows amongst Star Wars fans by apparently turning part of the Expanded Universe mythology of old — thought to be junked when Disney purchased Lucasfilm in 2014 — into movie canon. That’s where the idea of Han Solo as part of the Empire came from, originally; indeed, the “Han Solo Trilogy” novels by A.C. Crispin — The Paradise Snare, The Hutt Gambit and Rebel Dawn — tell the story that Solo: A Star Wars Story seems to be attempting to retell for movie audiences, to some degree. 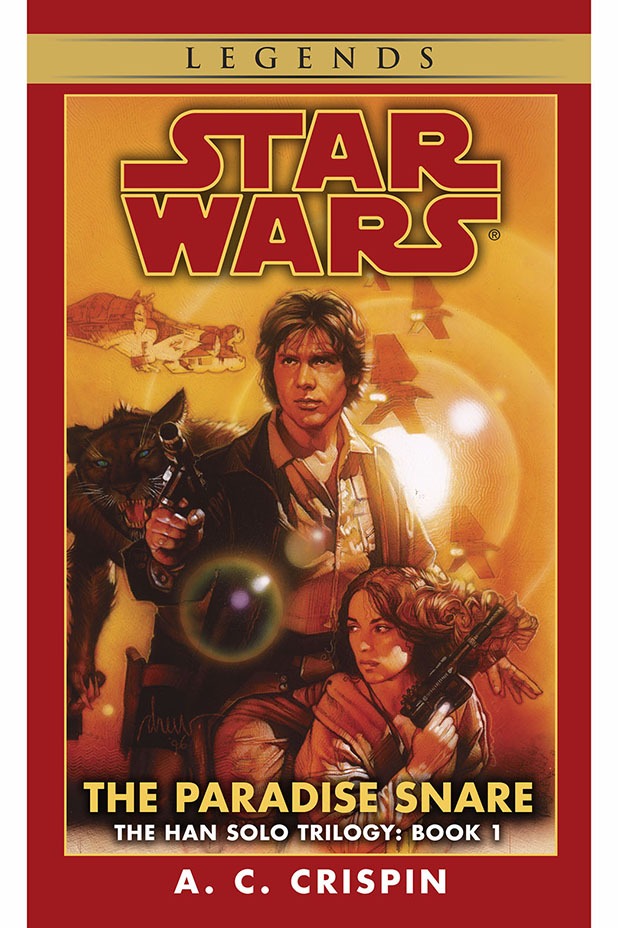 In those novels, Solo goes from being a kid raised by space pirates to signing up to the Imperial Academy in an ill-guided attempt to do something with his life; he became a hot-shot pilot — the best in the galaxy, perhaps — but eventually leaves the service after rescuing Chewbacca and realizing that, perhaps, the Empire were the bad guys all along. From there, an attempt at earning a living as a pilot brings him into the smuggling business, which in turn brings him into contact with Jabba the Hutt, and the rest is…if not history, then at least mythology that everyone fondly remembers from their childhood.

While this isn’t likely to be the exact arc of Solo, the combination of Imperial service (or the tease thereof) and a press kit promise of the first meeting between Han and Chewbacca would apparently suggest that there’s going to be more echo between the Expanded Universe and the movie that might have been expected otherwise. Which really raises the question…what’s the point?

That question has haunted Solo since its inception. Solo’s big character arc happens during the original trilogy of the franchise, and a large part of his appeal is that, like Luke Skywalker, we as an audience are seeing his biggest adventure unfold, and watching him get out of his depth and come out of it a hero. Unless it’s intended to be particularly boring, a prequel invalidates that by its very existence, but at least offers the novelty of something new. If Solo: A Star Wars Story is, to all intents and purposes, an adaptation of material that fans have been familiar with for the last two decades, even that argument is lost.

Previous experience with Star Wars trailers have demonstrated that there’s a certain level of intentional misleading baked in, especially to early trailers; Rogue One’s reshoots added another level of unintentional confusion, with scenes disappearing altogether in the finished product. It’s possible that the movie Solo: A Star Wars Story might have an entirely different tone, visually and narratively — and an entirely different plot, for that matter — than what is advertised in these first glimpses. Certainly, it should be hoped so; if nothing else, there’s something very true to the spirit of the franchise about grabbing victory out of the jaws of, if not defeat, then certainly an unforced error.

Does the 'Solo: A Star Wars Story' Teaser Get the Job Done?