[This story contains spoilers for Solo: A Star Wars Story]

“We can get our own ship.… We won’t have to take orders or be kicked around by anyone.”

The quote above defines both Han (Alden Ehrenreich) and Qi’ra’s (Emilia Clarke) dream at the start of Solo: A Star Wars Story. But the film has trouble living up to that goal; while Han ultimately flies off in the Millennium Falcon to fulfill his journey, Qi’ra’s story concludes with her still taking orders — thanks to a last-minute Darth Maul cameo that, while praised, deprives the Star Wars franchise of its first notable female crime boss in the form of an independent Qi’ra.

Throughout the film, Qi’ra attempts to protect Han from the truth about the life she’s led in the three years since his escape and her arrest on their home planet of Corellia. While he’s continued to dream of buying a ship and returning to rescue her, she’s been sold to Crimson Dawn, the most ruthless crime syndicate during the Empire’s reign. She works for Dryden Vos (Paul Bettany), and has committed unspeakable crimes on his behalf. She genuinely cares for Han, and knows that no matter what, the best way to protect him is to keep him at arm’s length and out of her life.

Ultimately, Qi’ra kills Dryden during a final-act showdown on his yacht, and sends Han off to save Chewie (Joonas Suotamo), who has been taken hostage by Beckett (Woody Harrelson). When Han and Qi’ra embrace for what could be the final time, it becomes increasingly clear to everyone but Han that Qi’ra will not catch up with him after supposedly ransacking Dryden’s yacht for currency to buy their own ship. She encourages Han to save Chewie from Beckett since she knows Chewie is the only one who could potentially cushion the blow of what she was about to do to Han’s heart.

As soon as the sliding doors shut on Han and Qi’ra, a thrilling possibility emerges as Star Wars was about to do something it had never done in any of its films: crown a main character as a female crime boss. What makes this probability even more tantalizing was that Qi’ra would likely function as a double agent since she helped protect both Han and Chewie as well as Enfys Nest’s (Erin Kellyman) emerging rebellion by blaming Tobias Beckett (Woody Harrelson) for the death of Dryden and the missing coaxium obtained from Kessel. It’s also possible that Qi’ra, as Dryden’s top lieutenant, leaked the train heist intel to Enfys since Beckett reminded Dryden that they were supposed to be the only ones who knew about the shipment of coaxium. Enfys has eyes and ears everywhere, but Qi’ra’s eagerness to take down Dryden and help the allies felt like a decision she had made long ago. If she was already a double agent as of the train heist, then her first reaction to seeing Beckett alive post-heist could be interpreted as more than just astonishment that he was working with Han. 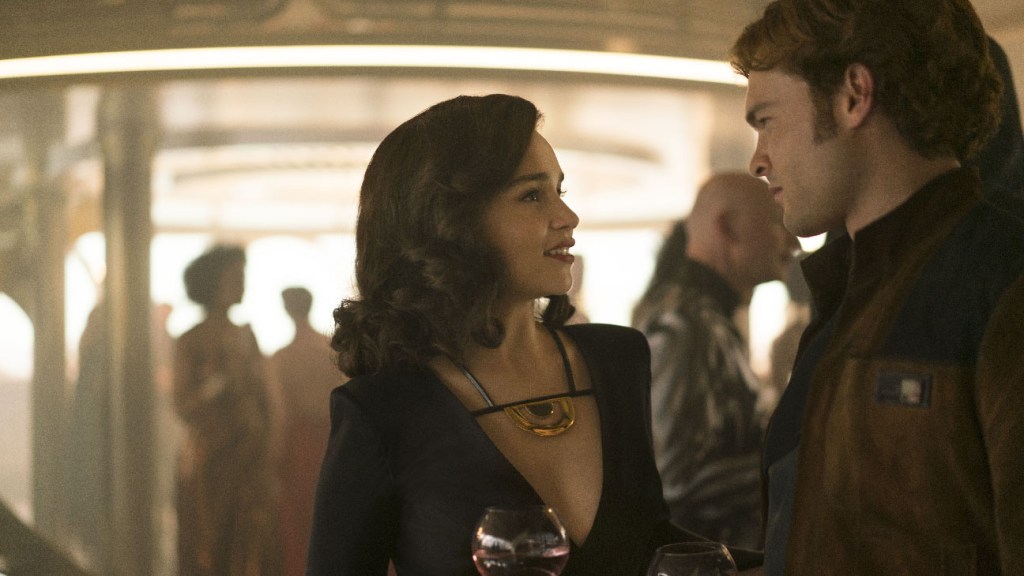 As far as her explanation for Dryden’s death and missing coaxium, Qi’ra delivers this lie via Dryden’s ring, which functioned as a key for contacting Crimson Dawn’s overlord, a shadowy figure that Dryden and Qi’ra indirectly reference during the film. Once the ring is plugged in, the windows of the yacht seal shut, much like the security gate at the Corellia spaceport that first separated Han and Qi’ra. This time, Qi’ra knowingly seals herself off from Han since it’s the best way to protect the smuggler; Chewie; and their new ally, Enfys Nest. Had the film immediately cut to Han confronting and shooting Beckett on the beach, it would’ve made Qi’ra’s choice to leave Han behind all the more powerful, because she’d still have that painful moment of looking down at him on the sand, knowing he’d struggle to understand her decision to leave him. Qi’ra has chosen to sacrifice her chance at freedom to protect the man she loves as well as a rebellion she believes in despite the harm she inflicted upon its allies while serving Dryden and Crimson Dawn. As much as she wants to run off with Han, she knows they’d all be in grave danger given Crimson Dawn’s looming overlord that seemingly had control over all the major crime syndicates. By acting as the new figurehead of Crimson Dawn and turning Beckett into her patsy, at least Qi’ra could still protect her true friends and allies to some degree.

While Qi’ra doesn’t get the freedom, the life or the ship she wanted to co-pilot alongside Han, she still puts herself in a position to captain the Crimson Dawn yacht to where she’d “no longer have to take orders or be kicked around by anyone.” Of course, she still had someone to answer to, but surely, she’d be granted the same autonomy that Dryden seemingly had. Right…?

Unfortunately, no. The film decides to take away Qi’ra’s agency and diminish her sacrifice including the magnitude of her choice to protect Han from a form of danger he wouldn’t be able to fathom, something Han’s attitude about The Force (as revealed in A New Hope) proves. Once Qi’ra contacted Crimson Dawn’s overlord to inform him of Dryden’s death via Beckett’s betrayal, the film’s decision to reveal Maul took away the power of Qi’ra’s choice and sacrifice with every passing second and word Maul spoke. There was a way to have the best of both worlds, one where Qi’ra’s agency isn’t reduced and the power of Maul’s reveal is still felt. Had the film cut to Maul receiving a recorded message after Qi’ra flew away from Han on the beach, his reveal could’ve been just as impactful since he could still Force-grab his double-bladed lightsaber out of anger and skepticism. Qi’ra would still have to face Maul in a future story, just not at the expense of her agency in Solo as well as a budding character arc that is unlike anything we’ve seen in Star Wars films to date.

But this wasn’t to be. Instead of reintroducing Maul and concluding his reveal on an ominous note, Maul continues to deliver veiled threat after veiled threat during his exchange with Qi’ra. When she relays that Dryden was betrayed and murdered by Beckett, Maul questions the validity of her story. Then, Maul doubts Qi’ra even more by saying that one man couldn’t have killed Dryden and his enforcers alone. He proceeded to laugh at Qi’ra’s assertion that she could’ve saved Dryden if she was present at the time of the “slaughter.” Maul then Force-grabs his double-bladed lightsaber and orders Qi’ra to his home planet of Dathomir so that they could decide what to do about Beckett “and his accomplices,” further proving that Maul doesn’t believe Qi’ra’s story. Last but not least, Maul stands up, turns on his lightsaber and informs Qi’ra how they’ll be working “much more closely” together. As a result of Maul’s many veiled threats, Qi’ra quivers in fear after Maul ends their transmission.

From this point, the film cuts to Han’s goodbye to Beckett, which cues Qi’ra’s departure for Dathomir and the tremendous sadness that both characters feel as they watch each other fade away. However, because Maul orders Qi’ra to come to him via a series of veiled threats, some viewers may misinterpret Qi’ra’s abandonment of Han as a result of Maul’s mandate. That’s precisely why Maul’s scene is so problematic, because Qi’ra already chose to leave Han behind, long before the yacht door slid shut on him. Qi’ra’s decision to leave Han behind per her own judgement should’ve been explicitly hers. Instead, the timing of Maul’s reveal and his multiple veiled threats that followed only muddled a choice that Qi’ra had already made. She was always going to protect Han and the allies by lying to Maul and taking over as Crimson Dawn’s figurehead. Even if there was no Maul to answer to, Qi’ra’s decision to leave Han behind was never going to change. She’s been branded as Crimson Dawn for life, and because of all the atrocities she was forced to commit across many planets, Qi’ra loves Han too much to put him in harm’s way given the permanent target on her back.

Ultimately, Qi’ra ends up exactly where she started in this story: taking orders and being kicked around by the likes of Lady Proxima, Dryden and now the former Sith Lord known as Darth Maul. By lying to Maul about Han, Chewie and Enfys’ allies, it’s again implied that Qi’ra will function as a double agent despite being the figurehead of Crimson Dawn’s crime syndicate. With Maul now looking over her shoulder, she has her work cut out for her, but had the film hinted that Qi’ra had a plan to deal with Maul, her agency and the significance of her choices might’ve been restored after Maul’s threatening exchange. Instead, she has to venture into the unknown and again pay the price for Han’s impulsive plans, much like that day at the Coronet Spaceport checkpoint on Corellia early in the film.

Qi’ra didn’t get the ending she deserved in Solo: A Star Wars Story, and judging by the film’s box office returns, Qi’ra may not get an onscreen ending at all. But hopefully Lucasfilm will still find a way to complete one of their most compelling character arcs to date. That’s something she deserves.