Two weeks ago Disney CEO Bob Iger made it clear that Marvel Studios chief Kevin Feige would assume control of the cinematic futures of the X-Men characters after the company completes its acquisition of Fox. That would leave Sony as the only other studio to manage Marvel Comics characters as it retains control of Spider-Man, which it has loaned out to Disney a couple times now, and his cast of characters.

With that in mind the studio this week releases Venom. Tom Hardy stars as Eddie Brock, an investigative journalist currently chasing down a story involving a biotech company run by Dr. Carlton Drake (Riz Ahmed). That company has allegedly been engaging in some dangerous experiments, one of which involves a symbiotic organism. When that symbiote attaches itself to Brock, he gains superhuman powers, along with the desire to eat people.

Tracking estimates forecast an opening weekend somewhere north of $60 million, which would be good news for Sony. To help bring people out, it’s run a campaign that has constantly reminded people this is the story of an antihero while establishing Venom on his own, separate from Spider-Man, on whom the character’s motivations have almost always depended. 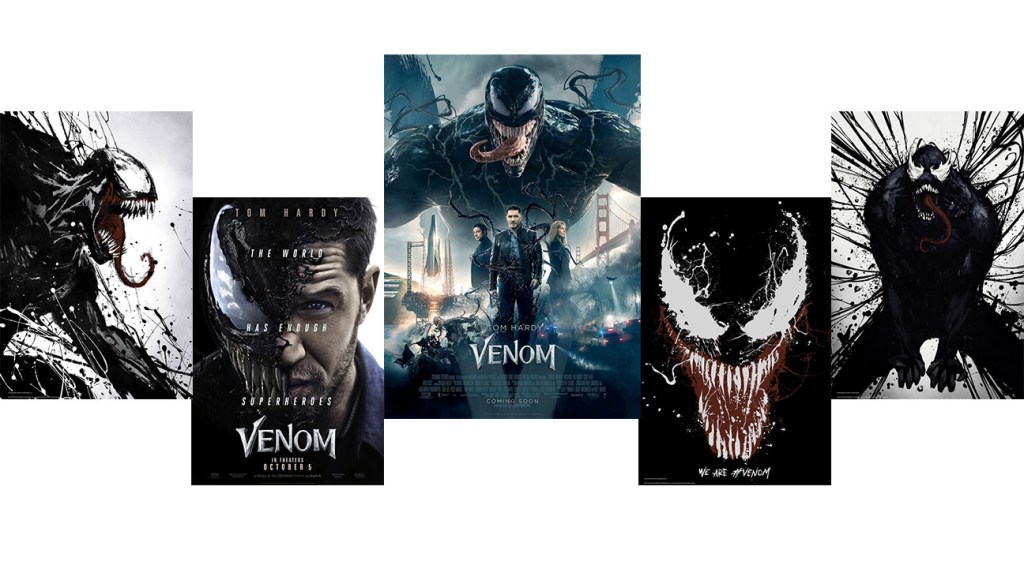 The first teaser poster hit exactly the beat it needed to, showing Venom’s huge, white, distorted eyes looking out at the audience from a solid black background. A great first effort. The second puts a crawling Venom mask on Hardy’s face to show the split nature of his character.

A series of three posters featured bold images of the title character. One showed a close-up of his face, with wild lines coming out of his eyes and mouth to show how out of control he is. The next pulls the camera back to show more of the character, but the same kind of uncontrolled fury is communicated with black lines shooting out of his body in all directions. The third offers a profile of Venom lunging toward something off-camera, his tongue out and anxious for whatever he’s about to eat.

A new version of the same image showing half of Hardy’s face obscured by the symbiote was released that also sported the tagline “The world has enough superheroes,” something that was used online as well. Sony then pulled out the usual superhero movie design tropes for the theatrical poster, putting Hardy in the middle with Michelle Williams and Ahmed flanking him, their backs turned to the camera. Venom looms over the image, which includes various elements that offer hints as to the story and setting, from a spaceship about to launch to the Golden Gate Bridge to Venom about to attack something.

There’s lots of Tom Hardy as Eddie Brock talking about how everyone has their struggles in the first trailer (19.5 million views on YouTube) but, as many people pointed out, not much Venom. He talks in voiceover about dealing with issues and problems, and we see him running away from things as well as freaking out in an MRI machine. The only glimpse we get of anything black and evil is a single shot of a strange liquid substance being eyed by a mysterious gentleman.

The second trailer (70.6 million views on YouTube) seems designed to alleviate some of the concerns people expressed after the first. It starts with the symbiote being harvested from the wreckage of a doomed craft by Carlton Drake (Ahmed), who seems intent on exploiting it for gain. Turns out Anne Weying (Williams) works for that guy, something Eddie isn’t thrilled about, especially since he’s about to interview him as part of his research for a story. That interview doesn’t go well but does lead to Eddie meeting someone who warns him about shady happenings at the company. Somehow Eddie comes in contact with the symbiote, which bonds with him and protects him from subsequent attacks. It also asks him to commit all kinds of mayhem, but he tries to limit that. It ends with a clear shot of Venom engulfing Eddie.

Another trailer (43 million views on YouTube) came out in late July that offered an even better look at the title character, though that’s about it. What the symbiote is, where it came from and more still aren’t made clear, including what it wants or why it decides to just hang around with Brock. 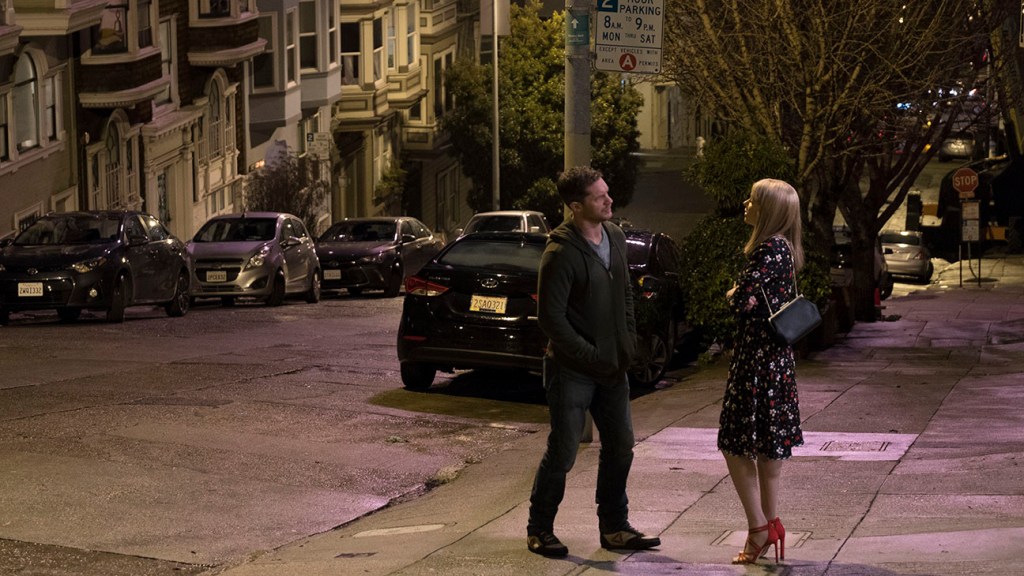 Marvel, despite the movie not coming from their own production house, did give the character a bit of comics attention, announcing early on in the film’s hype cycle that Venom would be at the center of a couple miniseries events to help get people’s attention.

There were several different sponsored posts run on Twitter during San Diego Comic-Con, one just promoting the #WeAreVenom hashtag and one announcing the launch of @EddiesClubhouse, an account dedicated to answering fan questions.

Online ads began running in mid-September featuring variations on the key art showing half of Brock’s face and half of Venom’s. Around that time an ESPN-exclusive TV spot was released showing Venom being brought in to the offices of the Oakland Raiders in a mascot tryout.

Other commercials from the studio took various approaches to showing off Brock and his alter-ego, with some focusing on how he’s kind of a bad boy to others that featured the Eminem song from the soundtrack.

Turning people into Venom was the idea behind both a Facebook Camera Mask and a Snapchat lens that applied the face of the symbiote to the subject of the video or photo.

There were also a couple promotions involving Amazon, which has partnered with Sony on previous films as well. First, Alexa users who have installed the Fandango skill will hear a few lines of dialogue from the movie when they search for showtimes. Second, Amazon members could scan a “smilecode” within the shopping app to save $5 on tickets.

? MSI, which offered a box of movie-branded products to those who bought something online along with a sweepstakes awarding a trip to San Francisco and other locations.

? Brisk, which released a “Symbiotic Dark Cherry Limeade” in movie-branded packaging, supporting that with a TV spot and other ads.

The release of the first full trailer was timed to happen during CinemaCon in April, where the movie was part of Sony’s presentation to insiders and press there.

A small version of the teaser poster was handed out to those hitting up their local comic shops on Free Comic Book Day earlier this year and then again at San Diego Comic-Con in July, where the cast and crew all appeared to talk about the story and get fans hyped up for it.

The first clip, released in late September, shows Eddie confronting Dr. Drake about the secret experiments Drake’s company has reportedly been engaging in, a confrontation that has Eddie being ejected from the building. A second showed Venom taking on a whole group of SWAT officers. 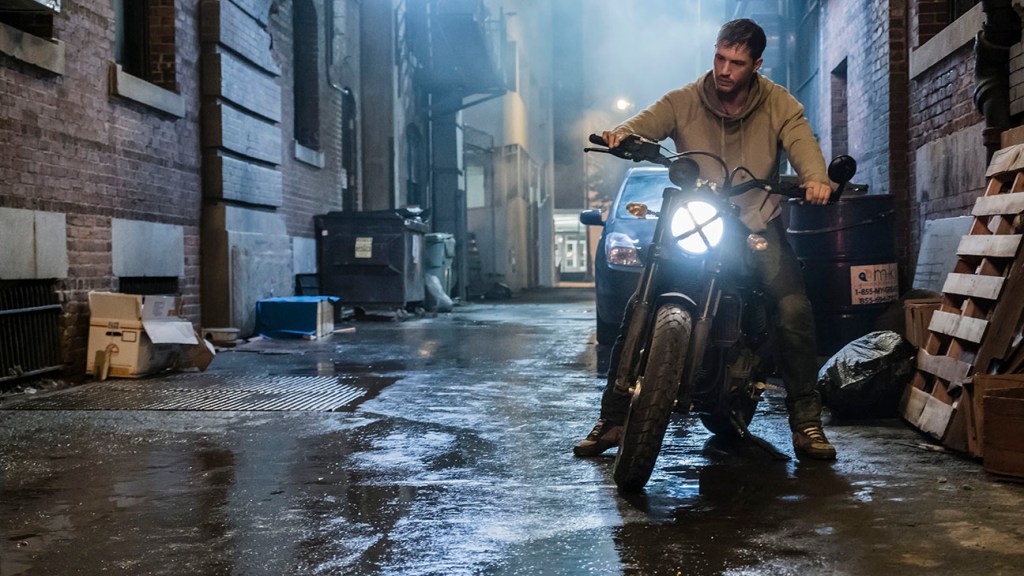 In between all of that, Hardy and others have offered various takes on whether or not Spider-Man exists in the universe of this movie. That answer has been less than consistent, but it ultimately seems as though he does not. The hero is not part of the same world as Venom. That’s partly because if he were, it would mean either 1) Venom is also part of the Marvel Cinematic Universe that Tom Holland’s Spider-Man exists in; or 2) There’s another Spider-Man running around out there we’ve never seen.

That means Sony has had to try and sell a character with deep ties to the Spider-Man mythos without being able to draft off that character’s popularity. It’s a tough trick to pull off and why the studio has leaned so strongly into positioning Venom as an antihero with an agenda all his own. If the movie can pull any audiences not interested in seeing Bradley Cooper make a star out of Lady Gaga it might be a gamble that pays off.