[This story contains spoilers for Sorry to Bother You.]

Now that San Diego Comic-Con is starting to fade into the rear view mirror, it’s time to consider a film that would fit right in among the genre-projects at the gathering, even if it’s not immediately apparent. Until late in the game, the full scope of Sorry to Bother You doesn’t come into focus.

Boots Riley’s corporate takedown veers in a direction so insane and absurd that its central metaphor about the dehumanization inherent in capitalism goes from on-the-nose to breaking-the-nose.

It’s revealed that a new-wave slave-labor mogul, Steve Lift (Armie Hammer), is turning his “employees” into horse-people so they can work harder than regular humans. These Equisapiens are naked, tortured abominations that are everything evil about compromising oneself for maximum achievement.

Sorry to Bother You’s transformational twist follows in the cloven footsteps of politically minded body horror and science fiction that’s been around since Ovid was warning the Romans about messing with the pantheon. The film’s central clashes all center around money, jobs and the philosophies around both. Steven Yeun’s labor organizer finds unexpected opposition when Lakeith Stanfield’s Cassius Green gets placed on the fast-track to the top after showing a knack for sales. This also causes a rift between Green and his girlfriend Detroit (Tessa Thompson), the latter of which is plenty happy with struggling for one’s art so as not to be part of the corporate machine. The added element of genetic mutation and animalistic transformation only boils these debates about labor, capital and work over with its heightened weirdness.

Without David Cronenberg’s over-the-top nastiness in The Fly’s complete decomposition of Jeff Goldblum, the allegory for aging’s toll on the body (or the AIDS epidemic, as some have read the film) wouldn’t be near as potent. When taking away a person’s very personhood, altering it irrevocably, it has to be intense enough so that it stands out and shocks from the daily mundanities that devalue us. You have to go big with dehumanization, especially at the end. It’s why Soylent Green is people; it’s why The Twilight Zone’s “Eye of the Beholder” has such intense, pig-faced impact. 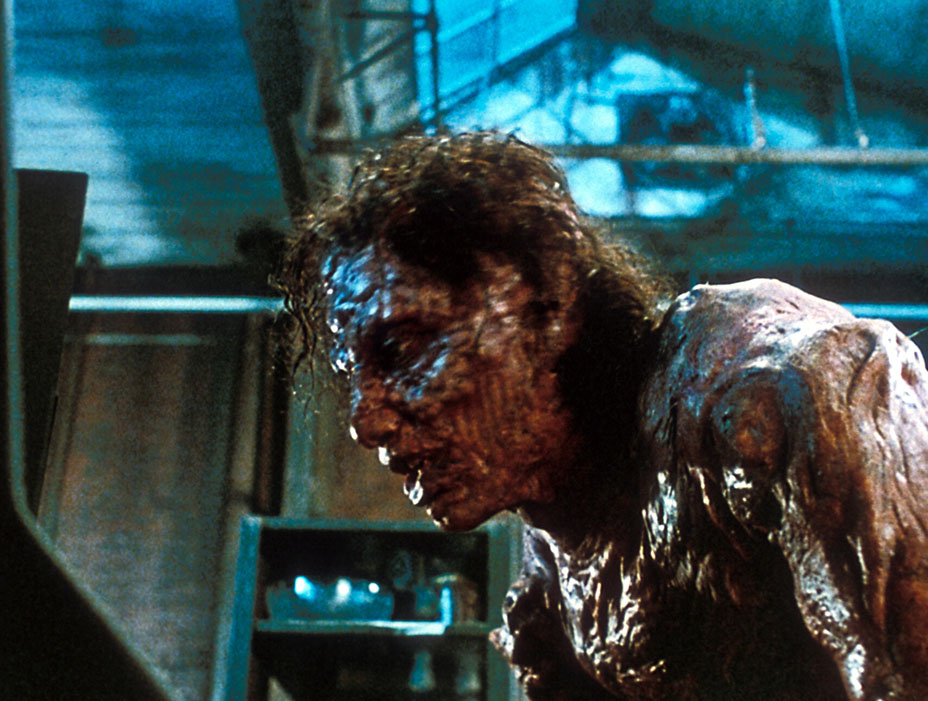 That is something that has been around for a long time, often riding the line between campy humor and the more serious, message-pushing genres of science fiction and horror. These morphs are usually a punishment of scientific hubris (see any movie from the ‘50s with the title The [Animal] People/Man) or tampering with magic that belongs to the gods. Sometimes it augments a funny story about being a fish out of water by making that fish a werewolf, a la An American Werewolf in London. Tons of animals have been used, each with their own baggage.

With horses, the metaphor picks up a few undertones. It’s similar to the ass transformation affecting Pleasure Island’s boys in Pinocchio. You want to smoke, gamble, drink and curse? You’re going to be turned into a donkey and sold into slave labor. It’s an indictment of the working class (because they take part in such base activities, according to the snooty elite that have apparently never cursed in their lives) as nothing more than beasts of burden, as pack animals that live solely to best serve the machinations of the economy. But Riley takes it a step further, setting the film in alt-present Oakland and imbuing his transformations with a racial component on top of its economic one.

When Lift recruits Green, giving him the sales pitch for the Equisapiens and advocating for Green to go undercover as the Equisapien Martin Luther King, Jr., it comes after putting the young black man on parade. He asks for stories of gang life, then asks for a rap performance, despite Green’s refusals. Green eventually figures out what the crowd wants, just shouting the N-word to give his white audience the gross, exotic experience they desire.

The Equisapiens are all kept naked and chained, hidden in a mansion like disobedient slaves. Lift tries to entice Green with the transformation, saying that he will have a horse-sized penis (in addition to being the voice of an oppressed underclass). When Green is unsure if he’d already been dosed by the transformational drug, he asks Detroit if his penis has gotten bigger (rather than, say, if his face is a horse face) — because if there’s anything that the world of Sorry to Bother You understands about the intersection about capitalism and masculinity, it’s that both are about ego above all else.

Green talks to some Equisapiens, speaking in a slow “talking to an isolated tribe” voice, with the punchline being that these transformed people are still people (one voiced by Forest Whitaker). The protagonist has to adjust his assumptions and his own ego, even after abandoning his success. That’s how quickly and natural the otherization took place — even from someone that thought they were going to become an Equisapien. It’s a smart one-off that doesn’t let Green completely off the hook while strengthening the central metaphor with a gag. The unlearning period may be filled with horse-people, but it’s a potent reminder that money and power go to one’s head quickly and are hard to dislodge.