Of all the fond memories Bill Pullman has of working on Spaceballs, the crew’s fear that working with a special-effects bluescreen could make them pass out or go blind is the tale which makes him laugh hardest in the recounting.

Now a household name, the then-32-year-old Pullman was a relative unknown, with only one film credit under his belt (Ruthless People), when Mel Brooks saw him in the Los Angeles Theatre Center production of Barabbas. It was at that point — after Tom Cruise and Tom Hanks had both turned down the lead role in his sci-fi parody — the iconic writer-director offered Pullman the part of Lone Starr.

As the beloved Star Wars spoof turns 30 (June 24), Pullman granted The Hollywood Reporter an in-depth interview to discuss his zany adventure of working with Brooks, the late John Candy’s frustrations with his costume and how Pullman’s makeup artist scolded him for not acting like a star, among other cherished memories.

Sunglasses. That’s what comes to mind when Pullman reminisces about Spaceballs. And that thought makes him laugh so hard, it takes a moment before he can explain.

“They had a belief back in those days that the bluescreen was bad for your eyes,” Pullman says. “I can’t remember if it was Mel or the assistant directors who heard this, but they would call cut and everyone would put on their sunglasses.”

Even though they were warned the screen could damage their optic nerve or make them pass out after a while, some of the actors ditched the shades, Pullman says.

He adds: “It was so hard to work the comedy in between takes when everyone was wearing sunglasses.”

Brooks had an interesting method to deal with hitting a creative wall, Pullman recalls.

“Mel used to do these power naps where he’d lay down for just five minutes, and I have never seen anything like the spirit that would return to him,” Pullman says. “He’d come back with all these great ideas and solve problems. It was quite dazzling.”

One of Pullman’s favorite memories from his Spaceballs experience was the day he pissed off makeup artist Bob Mills, who he describes as an “old-school professional who wore a tie and blazer every day to work.”

Pullman drove a 1972 Plymouth Valiant that he loved, but it would break down on a regular basis and someone from the crew would have to bring him to the set. One day, Mills had enough.

“He said, ‘Don’t you know you need to behave like a star?! You come in here with that car like you’re a farmer!’ He was schooling me,” the actor recalls, laughing.

Pullman also got some sage advice from the late, legendary costume designer Donfeld.

“He told me, ‘Don’t worry, kid, I am going to make you into a star.’ He would grab the back of my pants and crunch them up and go, ‘See? This is going to be the secret that you carry through your whole career. You gotta get that part tight around your butt,'” Pullman says. 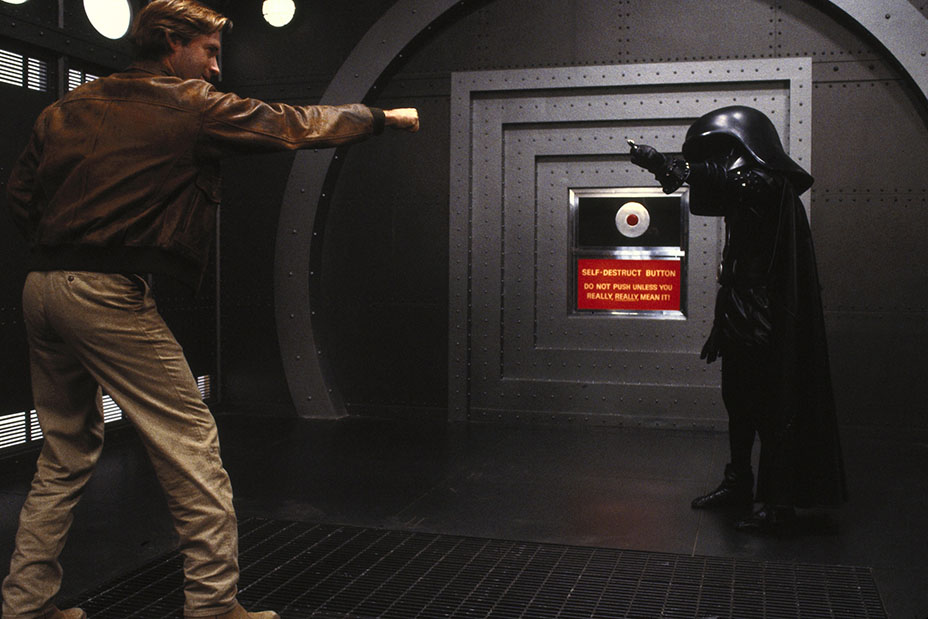 Pullman, who has numerous projects in the works, including the comedy film Battle of the Sexes and a Western titled The Ballad of Lefty Brown, along with a new USA Network series, The Sinner, says Brooks imparted some wisdom on him 30 years ago that really stuck.

“Mel had this thing where he said 10 percent of anything is good,” Pullman explains. “It was this way of saying that in art and being creative there are things you have to brush off, suggestions, ideas, whatever to get to that 10 percent that is really good. It’s that idea of looking for the exceptional, and knowing it is rare, and you have to always be aware of how hard you have to look for that 10 percent.”