Continue to The Hollywood Reporter SKIP AD
You will be redirected back to your article in seconds
Skip to main content
July 2, 2019 9:19am

Sony and Marvel Studios are pushing Spider-Man: Far From Home as essential viewing for the post-Avengers: Endgame storyline.

The movie arrives with tracking estimates predicting a $150 million opening weekend and a 90 percent “Fresh” rating on Rotten Tomatoes, buoyed by early reviews that have called it an entertaining and mostly light-hearted epilogue to Phase 3 of the Marvel Cinematic Universe. And its release in China, Japan and Hong Kong has already brought in $111 million before it hits U.S. screens.

Tom Holland returns for his second solo outing as the web-slinging superhero in the new movie, the first to take place after the events of Endgame. This time he’s on a school field trip to Europe when he’s recruited by Nick Fury (Samuel L. Jackson) to save the world from a new threat from extra-dimensional beings. Helping him is Mysterio (Jake Gyllenhaal), a hero from that same dimension. While he’s doing that, he’s working to deepen his relationship with Michelle (Zendaya) and learning to deal with a world without his mentor Tony Stark in it.

Endgame, the No. 2 all-time grossing movie with a $2.7 billion global gross so far (just short of Avatar), has played a major part in how this Spider-Man film has been sold, both in actual marketing tactics and in drawing connections between the stories told in the two films.

The first poster (from marketing agency BOND), released in January, shows Spider-Man’s face in extreme close-up and covered by the kinds of travel stickers you usually find affixed to trunks and other luggage.

Three more posters (from marketing agency BLT Communications) were released in late March that show Spider-Man crawling on or hanging from various European landmarks, making the overseas setting more overt. They’re very similar in design and style to the posters used in the campaign for Homecoming, lending a nice bit of brand consistency to the franchise.

More posters came out in late May. Two showed Spider-Man at the forefront, flanked by Nick Fury and Mysterio with various international landmarks behind the trio. One had a metallic spider symbol in the background, while another had a glowing triangle, the meaning of which is unclear but presumably tied to Mysterio in some way. Character posters (from marketing agency Concept Arts) showing Peter, MJ and Mysterio were released at the same time.

The one with Fury, which was also used for outdoor ads, was called out by Jackson for a design mistake because it flipped his face so the character’s iconic eyepatch is on the wrong eye.

For Imax (from BLT Communications), a poster was released that shows Spidey’s big head looming over everything with Fury and Mysterio toward the bottom, the characters surrounded by line drawings of European landmarks and locations. Spider-Man’s new black stealth costume is featured on the Dolby Cinemas poster and the Real 3D poster (both from BOND). Regal Cinemas also showed off a series of four posters designed to look like vintage travel promotions but with Spider-Man hanging around the top while his classmates walked along some scenic location at the bottom.

Everyone loves Spider-Man in the first trailer (45.3 million views on YouTube) from January, but Peter is weirded out by a flirtation between Aunt May and Happy. He and the rest of his class have the chance to take a European trip, which Peter hopes will be crime-fighting-free. That hope dissolves when Nick Fury finds him and enlists him in a mission. It ends with Mysterio seeming to fight one in a series of elemental monsters rampaging through the cities, but it’s a fair guess that all is not as it appears on this front.

The second trailer (63.2 million views on YouTube) was timed for release after the second weekend of Avengers: Endgame because it contained spoilers for that movie and the fates of its characters. It’s introduced by Holland, who warns viewers that if they haven’t seen Endgame they may want to avoid the trailer because of spoilers. After that we get that Peter is missing Stark but still acting as a hero. When he heads on a school trip, things start off fine, until Nick Fury tracks him down and introduces him to Mysterio, a refugee from another dimension impacted by Thanos’ snap. The two have to team up to stop a threat and save everyone, but the real message here is that Spider-Man is being positioned as the next Iron Man, the tech hero with a big heart that the world needs.

Unlike what winds up being the case for many movies, the second trailer has logged more views than the first. That’s likely because of the timing of its release, coming after Endgame was established in theaters and offering eager audiences their first look at the world of the MCU following the events of that movie. So there’s a lot of anticipation and excitement that helped propel those viewing numbers.

That trailer was added as a post-credits sequence for Avengers: Endgame beginning with that pic’s third week of release. It had previously lacked such a sequence, a staple of MCU films since 2008. It also set a new record for Sony, with 135.2 million views across platforms in the first 24 hours of its release. 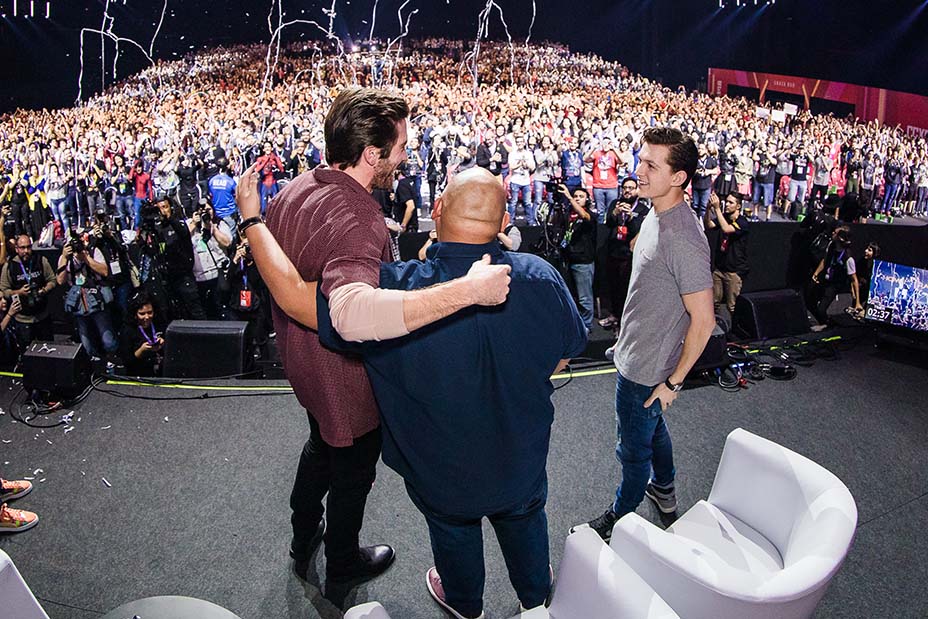 Holland appeared at Brazil Comic-Con in December to get the ball rolling on the publicity tour and start engaging with fans.

The international publicity tour Sony sent the cast on earlier this year was captured in part in videos from a trip to Mexico and another from a fan event held in Bali. Holland joined Marvel co-star Chris Hemsworth — who was promoting Men In Black: International at the time — in a mock interview mostly made up of the two of them making fun of each other. A video of the publicity tour’s stop in China came out a bit later, with London following after that.

Cross-promotional partners on board include:

? Doritos, which launched a massive campaign, including in-store displays along with online and TV ads, for its co-branded packaging, all of which promoted a sweepstakes offering a special Doritos-branded Spider-Man costume to the winner. There was a mobile browser game as well.

? United Airlines, which added Spider-Man to its new in-flight safety video for passengers. Business class passengers on flights beginning in June also received a swag bag of Spider-Man-branded toiletries and other items.

? The Women’s World Cup, which produced a co-branded TV spot narrated by Zendaya and featuring footage of both the movies and some of the big-name soccer players participating in the games.

? Audi, which promoted its product placement in the movie with a campaign that included a TV commercial showing Peter using his connections within SHIELD to win a high school science fair.

? Kellogg’s, which put movie branding on products ranging from Pop-Tarts to Cheez-Its and more, with online ads promoting that partnership and driving traffic to the site where people could buy those products on Amazon.

? NYC Go, which highlighted the locations people could visit in Peter Parker’s neighborhood in Queens, along with other New York City attractions.

? The Brothers Trust, a charity support organization that was promoted through an appearance by Holland and the turning of the lights atop The Empire State Building red and blue.

? Papa John’s, which offered movie-branded boxes for their pizza that included a Snapchat AR code that, when scanned, transformed the box into locations from London and Venice. The company also offered a custom face lens on Snapchat where players use Spider-Man’s webs to catch falling pizzas.

A week before the movie’s premiere, a video was released showing the cast answering questions submitted by fans through social media.

Promoted tweets were run in late May with short videos promising the simple message that Spider-Man was back and showing some of the Endgame aftermath he’s dealing with.

Sony worked with BossLogic on a movie mural at Southern California’s famed Venice Beach. Also on the artwork front was a poster contest run in conjunction with TalentHouse soliciting fan art designs.

Marvel added movie-inspired material to a number of its online and mobile games. The Spider-Man: Far From Home Virtual Reality Game from Sony Pictures VR was made available for Oculus Home, Viveport and other VR platforms.

Those seeing the movie in Imax at AMC Theaters could get an exclusive miniature Spider-Man collectible figurine.

While it wasn’t part of the movie’s actual campaign, Marvel’s announcement a couple weeks prior to release that acclaimed writer-director J.J. Abrams would be penning a new Spider-Man comic title certainly helped raise the character’s profile even higher.

The movie’s red carpet premiere included the cast and crew talking about this story and how it relates to Endgame, especially what they did and didn’t know about that movie during production and what sort of repercussions they expected it to have. Sony released a video compilation of the best moments from the premiere, which also included appearances by talent from other Marvel movies and shows.

Last week, Marvel announced it was rereleasing Avengers: Endgame into theaters with an introduction from directors Joe and Anthony Russo, an unfinished deleted scene and, importantly, a sneak peek at Far From Home to try and encourage fans to come out for an early look while also boosting Endgame’s box-office totals. It was a big enough deal that a TV spot for Endgame’s rerelease specifically included mention of the sneak peek being offered at the end of the film.

A TV spot released exclusively on ESPN over the weekend featured Holland finding NBA star Donovan Mitchell mistakenly got his Spidey suit and is having a bit of fun with it. 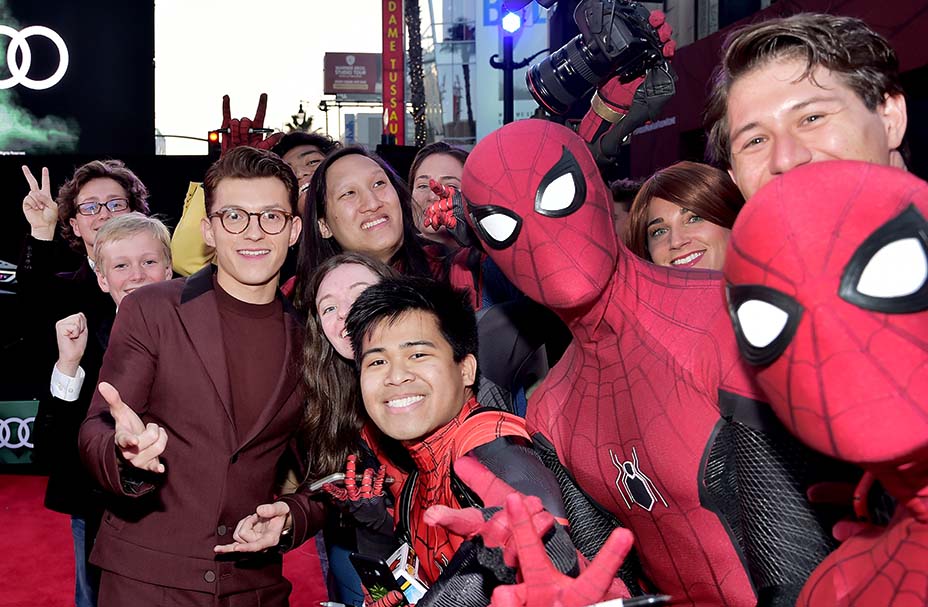 Throughout the campaign, everyone involved — from Marvel Studios head Kevin Feige to Holland and Watts — has drawn the connection between Avengers: Endgame and Far From Home, to the point that this movie seems to be positioned as more of an overt sequel to the earlier one than it is to 2017’s Homecoming. It’s being sold as an essential part of that story while being less of an important part of Peter’s story.

That approach may in part be to help the pic overcome the same curse that has lead other high-profile releases this year to “underperform” based on expectations and predictions, an outcome that’s so pervasive even Pixar isn’t immune. Franchise fatigue may indeed be a real thing that’s keeping some members of the audience away from theaters, now almost completely dependent on those movies.

Spider-Man: Far From Home is Holland’s fifth appearance as Spider-Man, including Captain America: Civil War and the two Avengers films, which is a lot when you consider that’s all within three years. It’s also in an interesting position coming several months after the best-reviewed Spider-Man movie yet, the animated Into the Spider-Verse that broke free of all continuities to create something wholly original and unconnected (in most ways) from what has come before. In some ways, then, Spider-Man is competing against himself.