We’re just a couple months removed from Avengers: Endgame, the 22nd film in the Marvel Cinematic Universe that also served as the massive, three-hour culmination of the MCU’s first 11 years. This epic movie, though, wasn’t actually the end of the third phase of the MCU — that honor falls on the 23rd film in the MCU, Spider-Man: Far From Home. This new pic featuring the latest iteration of Peter Parker, played by Tom Holland in his fifth appearance as the webtacular hero, gets to close up the massive Infinity Saga in a film that’s mostly enjoyable even though its greatest strengths lie with an unexpected player: its eventual villain.

With Thanos out of the picture for good, Far From Home begins as the world is just beginning to pick up the pieces from what’s called “the Blip,” aka the aftermath of when Thanos snapped half of humanity out of existence before the Avengers brought them back. But even though everyone has returned, that doesn’t mean the world has gotten back to normal. In the first scene, Nick Fury (Samuel L. Jackson) and Maria Hill (Cobie Smulders) go to Mexico to investigate a cyclone that apparently had a human-seeming face.

As crazy as that may sound, it’s true because the cyclone is one of the Elementals. Fury and Hill are surprised to discover a seemingly new hero fending off this alien bad guy, Quentin Beck (Jake Gyllenhaal), a denizen of an alternate Earth who has traveled to ours to stop the Elementals from destroying the planet. The three of them eventually recruit Peter to assist, even though he’s trying desperately to enjoy a European vacation with his science class.

At least, that’s what seems to be going on in the first half of Far From Home, before it’s revealed that Quentin Beck isn’t who he says he is. The now-renamed Mysterio is from our Earth, because he’s really just a disgruntled ex-employee of Stark Industries who had pioneered holographic technology that Tony Stark publicly mocked (in a scene from Captain America: Civil War given new context). The Elementals are holograms projected by drone technology, and everyone, including Fury, Hill and Spider-Man, is being fooled by the maniacal Beck and other ex-employees from Stark Industries with big-time grudges. Beck, in effect, is trying to cosplay as a superhero, in the hopes of creating bad guys only he can “destroy,” allowing him to take the place of the now-dead Iron Man as a superheroic leader.

The specter of Iron Man hovers over Far From Home — in the early going, people keep asking Peter Parker if he’s going to be the new head of the Avengers, and Peter is shocked to see that Tony Stark gifted him with a snazzy pair of glasses with cutting-edge technology in the vein of J.A.R.V.I.S. The message seems clear, and is almost existentially terrifying to Peter: He’s in charge now, even if he’s just 16 and would rather be a regular teenager. He keeps trying to fob off his responsibilities on someone else, to the point where he gives Beck the new technology (before realizing his new friend is a mischievous villain). 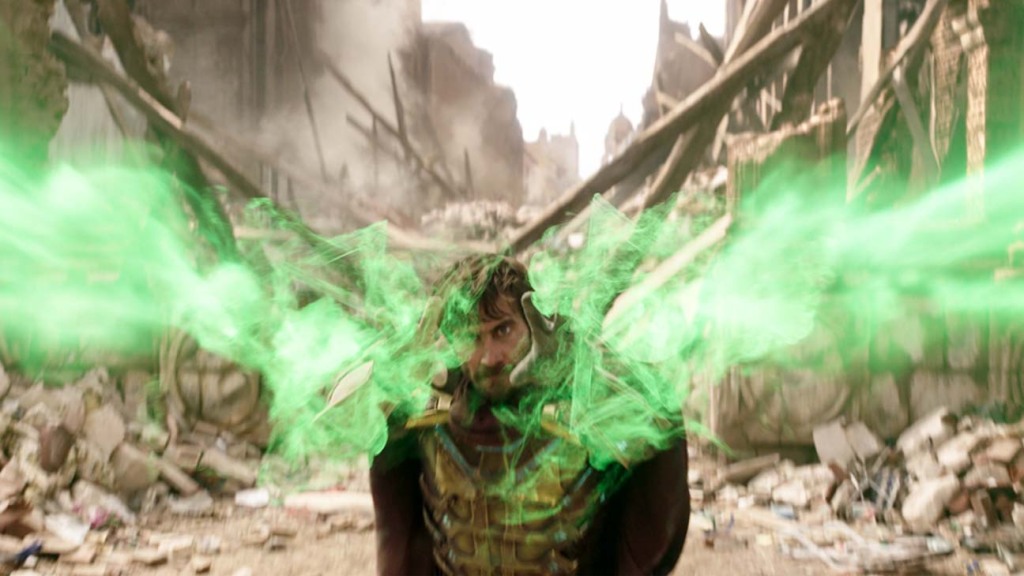 Beck’s villainy won’t come as a huge surprise to comic-book fans: Although the initial ads for Far From Home are careful to only include scenes with the character from the first half, he’s always been seen as a bad guy in the source material. There’s something almost metatextual about his nefarious plans, especially as they come right after Thanos’ downfall. It’s hard to imagine a scenario right now where any bad guy could come quite as close as Thanos in terms of evil, because who else has the power or interest to wipe out so much of the universe? Beck, in literally conjuring up a threat, represents something akin to a new version of Loki — a trickster who wants to capitalize on fear without posing as serious a threat to the innocent people of the world.

Gyllenhaal, who was once nearly Spider-Man himself back in the Tobey Maguire/Sam Raimi days, has a lot of fun with the part, once we find out what Beck’s really up to. In the first half of the film, Beck seems like a surrogate father figure the same way Tony Stark had been. (Even after he turns bad, you get the sense that Beck has some level of affection for Peter.) Once we learn what’s really going on, as Gyllenhaal walks around literally wearing a motion-capture suit, his eyes get a little wider and he indulges in the same kind of weird energy he’s exhibited in indie fare like Velvet Buzzsaw and Enemy.

And Beck’s villainy, as captured in the film, extends even after he’s died. In one of the two post-credits scenes — both of which can be legitimately categorized as shocking, in a rare twist for the MCU, which usually includes one goofy after-the-credits moment — after spending some time swinging around New York City with MJ (Zendaya), who knows Peter’s secret identity, our hero is shocked to see a video of Beck from beyond the grave. In fact, Beck had one more plan before he was killed in a climactic battle in London. He and his colleagues created a doctored video in which it would look like Spider-Man tried to destroy London himself. The kicker: Beck then reveals to the world that Spider-Man is Peter Parker, a fact that our hero wants to stay secret.

Aside from wondering what the world will look like if everyone thinks (even briefly) that Spider-Man is a bad dude, and knowing his real name, Spider-Man: Far from Home largely steers clear of giving a lot of hints as to what’s to come in Phase Four of the MCU. (This, in spite of an Easter egg construction sign Spider-Man swings by, which reads, “We Can’t Wait to Show You What’s Next.”) The film largely feels like an epilogue for the last 11 years’ worth of storytelling, not even trying to come up with a villain quite as terrifying as Thanos. Instead, with Quentin Beck, Far From Home leans more towards the first villain who brought the Avengers together, a character whose allegiances are deliberately unclear and whose plans could easily destroy the heroes from within.