Spider-Man has a new adversary, as Jake Gyllenhaal is in talks to play Quentin Beck, aka Mysterio, in the yet untitled sequel to last year’s Spider-Man: Homecoming. Fans have long lobbied for Gyllenhaal to take a role in a superhero movie, and while his casting as the fish-bowlheaded master of illusion certainly comes as a surprise, there’s no doubt that Gyllenhaal will create a fascinating portrayal of the character. Mysterio has been clamored for since Sam Raimi’s original series, with actor Bruce Campbell even suggested by fans to be Beck, due to his returning presence as pesky bit characters in Peter Parker’s (Tobey Maguire) life. With many of Spider-Man’s fantastic rogues’ gallery having already appeared in Raimi’s Spider-Man trilogy and Marc Webb’s two Amazing Spider-Man films, Mysterio has the luxury of having never appeared onscreen before. Not only does his power-set lend itself well to a special effects spectacular, but his specific brand of villainy and megalomania seems quite fitting for Peter Parker as our hero returns from the state Avengers: Infinity War left him, and he continues with the trials and tribulations of high school.

While there have been a number of lesser characters who have taken up the glass helm of Mysterio over the years, the central one, Quentin Beck, first appeared in The Amazing Spider-Man No. 13 in 1964. Created by Stan Lee and Steve Ditko, the unlucky number 13 seemed to have a hold over Quentin Beck’s life. A former special effects wizard and stunt man who couldn’t fulfill his dream of becoming famous in Hollywood as an effects specialist or an actor, Beck turned to a life of crime, deciding to use his brilliant effects and illusions to become a bank robber. Of course this set him up against Spider-Man. But Mysterio proved to be no pushover as he figured out a way to obscure Spider-Man’s spidey-sense, disintegrate his web fluid and most importantly, cause him to doubt his own sanity by posing as Spider-Man and committing crimes that left Peter wondering if he had multiple-personalities (’60s comic psychology!). Soon after, Mysterio became a founding member of the Sinister Six, but he didn’t stop going after Spider-Man on his own either. Several of his schemes included making Spider-Man believe he had shrunken down into mere inches, making Spider-Man believe he killed a bystander, and convincing Spider-Man he should reveal his secret identity. All of these plots failed, but Mysterio became a frequent presence whose schemes upset the life of both Spider-Man and Peter Parker. Jealous of Spider-Man’s fame, and blaming him for continued failure, Beck began to slip into a deeper depression, before ultimately losing a fight to the child superhero team, Power Pack. Then a shift happened. 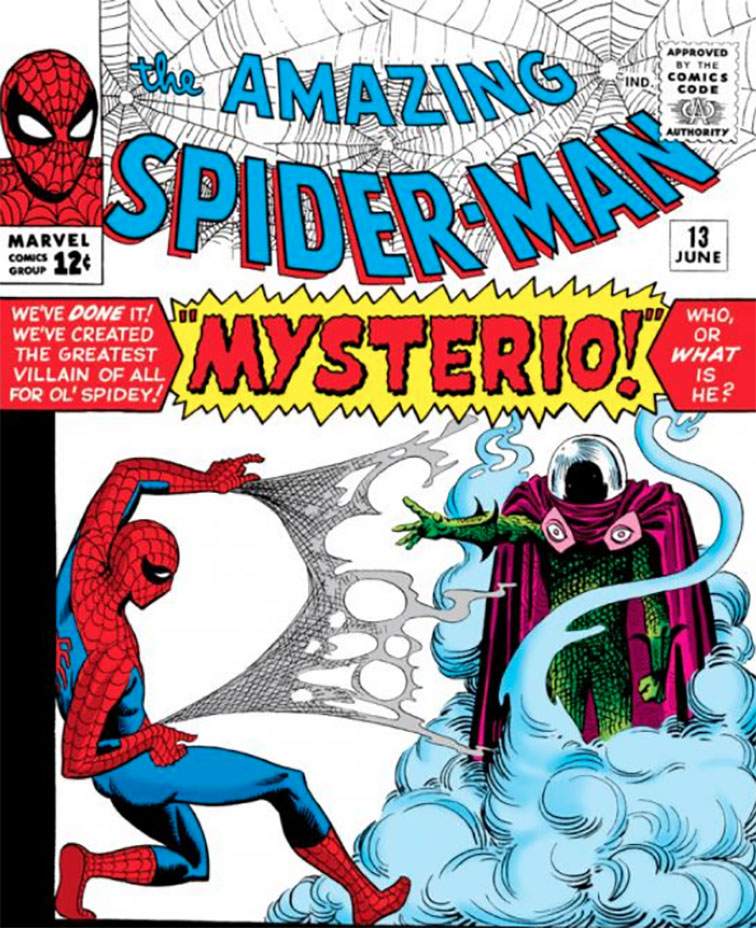 In the now classic and controversial Daredevil arc “Guardian Devil,” by Kevin Smith and artist Joe Quesada, Mysterio sank to new depths of villainy. Dying of a brain tumor and lung cancer as a result of the equipment he’d used to cast his illusions for so many years, Beck set out to destroy Spider-Man once and for all. The only problem was that at the time Spider-Man had been replaced by a clone (Ben Reilly), so Beck settled for Daredevil, Matt Murdock, instead. After buying information on Daredevil from the Kingpin, Beck devised a chemical compound to drive Daredevil insane by altering his moods and convincing him that demonic influences had laid claim to him. Beck also went after Murdock’s personal life, framing his best friend Foggy Nelson for murder and convincing his girlfriend Karen Page that she had HIV, ultimately leading to the latter’s death. After almost being driven to kill an infant he had been tricked into believing to be the anti-Christ, Daredevil regained his senses and went after Mysterio. In confronting Mysterio, Daredevil taunted him by saying that he was incapable of originality, and of being great. Denied the grand death he expected at the hands of Daredevil, Beck took a move from another Spider-Man villain, Kraven, and shot himself in the head. This dark end wasn’t permanent for the character, as things in comics rarely are, but Kevin Smith forever changed how the villain was perceived thereafter. 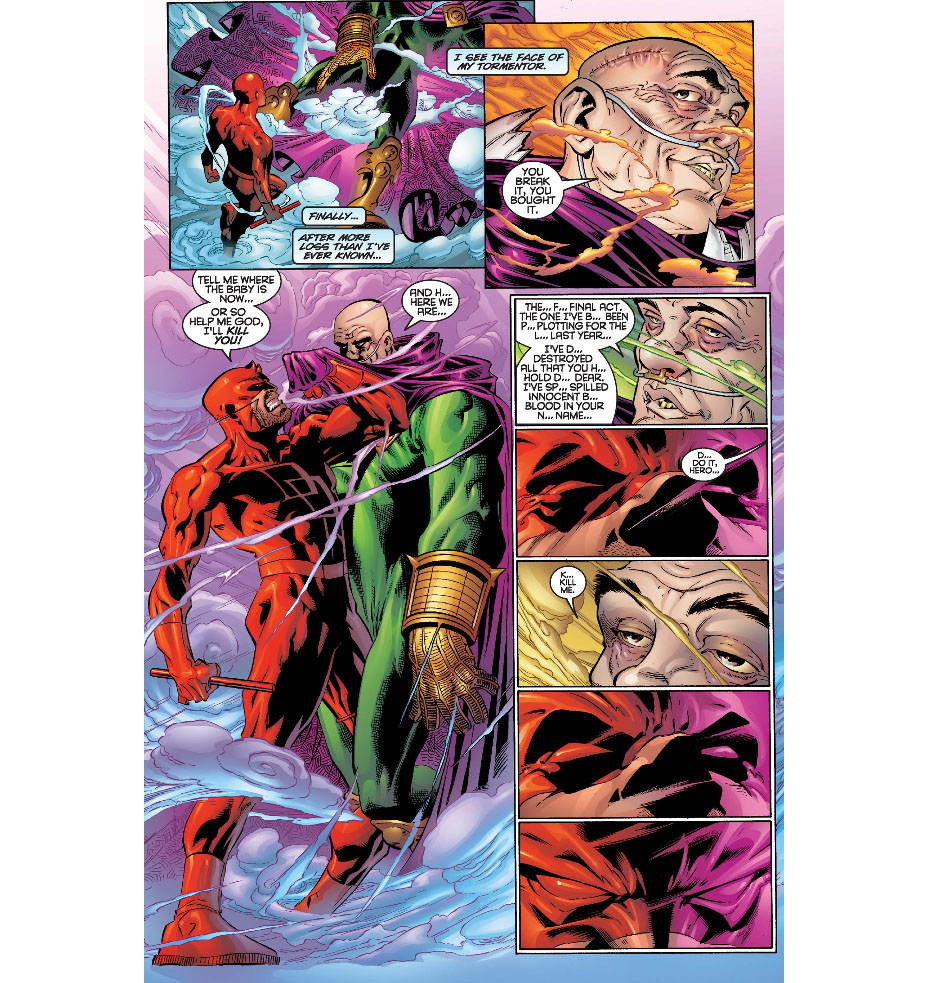 There’s an interesting idea not only concerning the lust for fame tied to Mysterio, but also the desire to be significant — to be seen, even if only in the worst ways. These concepts could easily work for Peter Parker (Tom Holland) as well, given that Spider-Man’s greatest stories often arise when the villain tends to mirror a darker aspect of Peter’s own insecurities. The Spider-Man: Homecoming sequel, which will be released on July 5, 2019, will presumably take place in the aftermath of the May 3, 2019 release of Avengers 4, which has promised to usher in a new direction for the MCU. Spider-Man will be the first character to have a film in this post-Avengers 4 world, and if the death toll of that film remains as considerable as Infinity War, then Peter Parker is going to have a massive responsibility living up to his fallen idols and being one of Earth’s mightiest heroes at 16 years old. It is fitting then that left in an unrecognizable world, with unrecognizable rules where even his death wasn’t permanent, that Spider-Man should face an adversary who could render reality even more unrecognizable and cause him to doubt his own abilities, if not his sanity as well.

While Mysterio will likely not be as unhinged as Kevin Smith’s take on the character, we know that Gyllenhaal can excel at playing characters whose mental stability is hanging on by a thread, as seen in Enemy (2013), Prisoners (2013), Nightcrawler (2014), and Nocturnal Animals (2016). And while the dark is where Gyllenhaal has frequently made his cinematic home over the course of the last few years, he has also displayed a talent for unhinged, scenery-chewing theatricality as well, particularly in the recent Okja (2017). While Michael Keaton’s Vulture, who is also rumored to return in the sequel, was relatively stable, Mysterio provides Spider-Man with an opportunity to face a man who doesn’t play by rules because his powers don’t rely on them. The film is also rumored to see Peter Parker on a global adventure, something we’ve yet to see in these films, and perhaps it will be tied to his quest to become a bigger hero in the aftermath of Avengers 4. Whether Mysterio will be planning global heists, or have bigger plans at stake, such as altering the consciousness of mass populations — something he’s attempted in the comics — he will certainly prove to be a fitting challenge for a Spider-Man looking step outside of his neighborhood. Mysterio isn’t just a frequently requested cinematic villain, he’s the best choice for a Spider-Man still learning to understand this bigger world he’s been thrust into.

Jake Gyllenhaal in Talks to Star in 'Spider-Man: Homecoming' Sequel