Ciara Wardlow is a student at Wellesley College, a Heat Vision contributor, and a 2014 alum of a math and sciences high school she lovingly refers to as “a nerd school.”

When I saw the first trailer for Spider-Man: Homecoming, I had two major takeaways. The first was, “Wow they are young—dear lord I’m old” (thankfully, a comforting Google search later that evening informed me that they merely looked younger than me). The second was, “Wait, does Peter Parker actually go to nerd school?!”

Let me make one thing clear right off the bat — I say “nerd school” with all love. You see, I went to nerd school — the Illinois Mathematics and Science Academy, or, in the words of WIRED magazine, “Hogwarts for Hackers.”

While most of the Internet was debating the necessity of yet another Spider-Man reboot (“Three in the past ten years is ridiculous.” “But he was so much fun in Captain America: Civil War!”), I was quite curious — even cautiously optimistic — about how Homecoming would portray the high school experience. Popular culture has an obsession with high school that I generally find a little strange (I mean, the typical review of the real-life high school experience is “would not do again, even for money, zero stars”) — and irritating. Despite all the film and TV shows centered around those four years, the range of characters they explore in those projects is, frankly, abysmal. The same social hierarchies, the same 15 stock characters (about half of whom can be traced back to John Hughes), the same checklist of scenes that seemingly must be included. 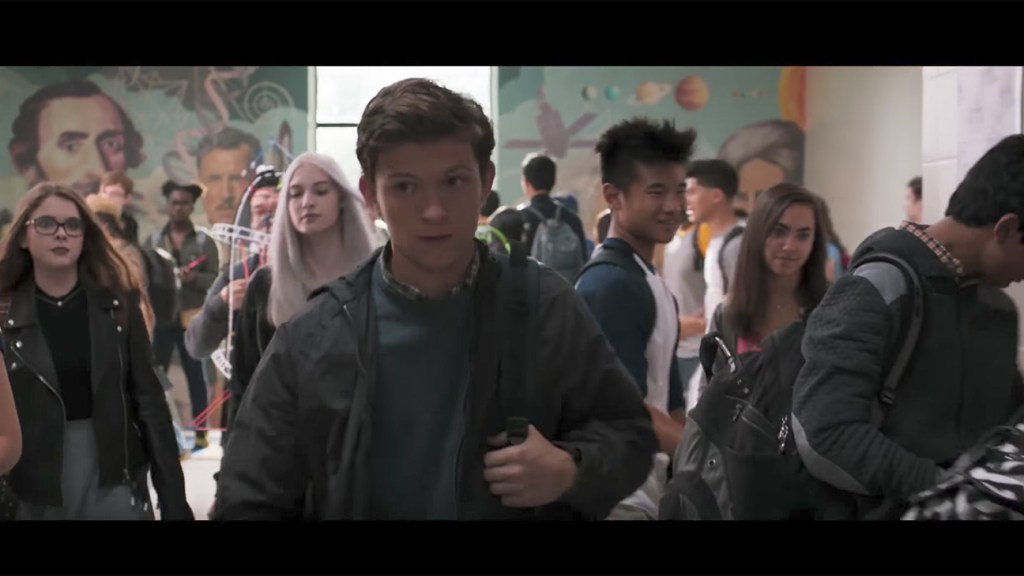 Having talked with people who went to all sorts of high schools — private, public, Catholic, day schools, boarding schools, STEM schools, art schools, you name it — or interacting with my younger sister, currently in high school (a different one than I went to) and having a completely different high school experience than I did, I’ve come to the conclusion that the one constant is that it’s a weird time, but a million different flavors of weird. So why do 95 percent of high school movies return to the same 5 percent or so of what’s available?

Both previous cinematic iterations of Spider-Man start out in high school, because it’s Spider-Man, and anything else would be sacrilege. Tobey Maguire’s Peter Parker is depicted as a “science nerd” type at Midtown High — a one-scene wonder of a place that manages to be as emblematic of early 2000s popular culture’s idea of the high school experience as an Avril Lavigne song — never shown doing any actual science. Andrew Garfield’s Peter Parker is first introduced primarily as more of a photographer (when we first meet him as a teenager, he’s carrying a camera and asked by two separate characters to take a picture), skater boy (attempted) protector of the small type.

Both characters are weighed down by tired teen movie cliches and actors whom, in spite of their talents, look like Hollywood “teenagers” (aka 20-somethings with backpacks) instead of actual high school students.

But if my 15-year-old little sister introduced me to a boy who looked and sounded like Tom Holland’s Peter Parker and said, “Hey Ciara, this is my boyfriend,” I wouldn’t think anything of it except maybe to give her two thumbs-up or something equally embarrassing because that is my sisterly prerogative; if she did the same with the equivalent of Tobey Maguire or Andrew Garfields’ Peter Parkers, I would drag her away forcibly for her own good, with flashbacks to Matthew McConaughey’s character from Dazed and Confused playing in my head. Of course, I do realize that Tom Holland is actually my age instead of hers, but he really pulls off 15. Not Riverdale type “15” (come on, think about it, the show would be five kinds of creepy if they actually looked the age they were supposed to be). Actual 15. I mean, just think of the mustache they glued on him in The Lost City of Z to try to make him look not 15. And his behavior as Peter Parker — from the phone video diary the film opens up with to the way he interacts with his friends and Aunt May — reminds me of various encounters with my sister who actually is that age, so I feel qualified and comfortable giving that a seal of authenticity as well.

Homecoming is, in many ways, an homage to teen movies. Even if you cut out the Ferris Bueller suburbia chase scene, Homecoming practically oozes John Hughes, but without being John Hughes Rip-off #1005, because Homecoming isn’t stealing its characterizations from the Hollywood’s Idea of High School playbook. Sure, there might be aspects of certain characters that are very familiar, but not repetitive — and switching the setting to a nerd school with a different type of social hierarchy is a huge help. Instead of a poor John Hughes copy, Homecoming is the nerdy teen superhero movie John Hughes never made.

And just as the high school experience is not a monolith, neither is the nerd high school experience. But there are a few sure things: no nerd school ecosystem can support the machismo jock type, even if you have an individual there who would fit the bill in a more traditional high school environment. For one, you might not have the sports teams available to inflate their ego. I don’t think it’s explicitly stated whether or not Midtown School of Science and Technology has a football team, but my alma mater IMSA certainly doesn’t — and yes, you can totally have Homecoming dances without football. Secondly — and this is the really important one here — you just can’t pull off “dork” or “nerd” or “geek” as an insult when you go to a school with “Science” in the name. It’s like making fun of someone for wearing a blue shirt while also wearing a blue shirt.

'Spider-Man: Homecoming' Writers on the Scene That Redefines the Movie

Now, Homecoming has gotten some heat for making Flash Thompson (Tony Revolori) smaller than his cinematic predecessors and a member of the Academic Decathlon team instead of some jock with a ball that he could use to concuss mathletes or something, but that sort of choice is incredibly important to maintaining a believable nerd school atmosphere. STEM school teenagers are still teenagers. They can still be bullies, and make fun of people for dumb things — like having a name that is a somewhat outdated euphemism for a certain part of male anatomy — and for flimsy reasons that usually stem from their own insecurities (because, you know, they’re teenagers). They’re just probably not going to get into a fistfight in the hallway. The choice to make Flash a non-athletically inclined but highly jealous and insecure frenemy type also frees Homecoming from requiring yet another Flash/Peter showdown. “But I wanted Peter Parker to humiliate Flash Thompson in a fight on school grounds!” some of you might say. Well, Spider-Man and The Amazing Spider-Man already gave you two to pick from. Don’t be greedy.

It’s the details of Homecoming that soothe the tiny corners of my soul that repeat exposure to the remaining 99 percent of Hollywood depictions of high school have left in a near-permanent state of irritation. It’s the moment where Ned (Jacob Batalon) has a brief encounter with the chess team, who are just kids playing chess who happen to notice Ned creeping through the halls after class and wonder what he’s doing, as opposed to twitchy mole-people in need of a good scrubbing and a visit from the social skills fairy. It’s how the snarky Michelle Jones (Zendaya) clearly cares more about her books than her appearance but still remains you know, hygienic, and acts aloof as a defense mechanism in spite of clearly caring about the people in her social circle (been there, done that, got the T-shirt). It’s all these little things in Homecoming and more that had me leaving the film with a goofy grin on my face; little things that I had been looking for in every depiction of high school I had seen on a screen since being in high school myself, only to come up empty-handed until now.

Of course Homecoming is not a documentary. For example, even if Peter Parker is one of the most brilliant minds to have ever lived and can walk into his exams in every class without so much as five minutes of preparation and get perfect scores on all of them, putting in zero work outside of class — especially with the whole five stolen backpacks thing, which would also suggest five occasions of losing any and all notes, assignments and books in said backpacks — would land him in even hotter water than the film suggests. But at least the film shows him, even if only for a brief few seconds in montage, actually doing work in classes, and not just when the subject of the class serves the plot of the film, but because he’s a high school sophomore and that’s what high school sophomores do. And the film also doesn’t do the thing where it says that he’s that sort of model student who turns in all his assignments on time and actually writes multiple drafts of essays, but actually shows him doing just about everything else in the world but actual homework — perhaps the one thing that teen movies do that, more than anything else, makes me want to hulk out into a green rage monster and smash things.