Continue to The Hollywood Reporter SKIP AD
You will be redirected back to your article in seconds
Skip to main content
December 15, 2018 9:30am
Logo text

[This story contains spoilers for Spider-Man: Into the Spider-Verse]

As evidenced by Spider-Man: Into the Spider-Verse, there are quite a few people (and pigs) who’ve donned the familiar mask of Spider-Man. While the movie weaves a web that spans across different dimensions and introduces fan favorites like Miles Morales, Spider-Gwen, SP//dr (Peni Parker) and Spider-Man Noir, there’s one character that appears in the Spider-Verse post-credits scene that may be unfamiliar to some who are just learning about the larger Spider-Verse.

Donning the striking blue-and-red costume of Spider-Man 2099, Miguel O’Hara (voiced by Oscar Isaac) and his virtual assistant Lyla make a surprise appearance on the big screen. O’Hara, created by Peter David and Rick Leonardi, was the first Latino character to have the mantle of Spider-Man. He debuted in The Amazing Spider-Man in 1992 and launched his own series in 1998, a comic titled after the hero. Now, having Spider-Man 2099 show up in Spider-Man: Into the Spider-Verse opens the franchise up to accelerating in limitless directions.

Miguel shares a few traits that the other web-slingers have, but it’s immediately clear that he’s not the friendly neighborhood Peter Parker (Jake Johnson) that we’ve been used to seeing. Nor is he the young Miles (Shameik Moore), who wants to fulfill the mantle of his hero, Spider-Man. Miguel is an often arrogant hero who’s not afraid to cross the line to apprehend criminals — something that most Spider-People would never do (Save a certain Doc Ock). Spider-Man 2099’s powers are quite unique, and he gained them after a sabotaging colleague rewrote Miguel’s DNA with 50 percent of a spider’s. 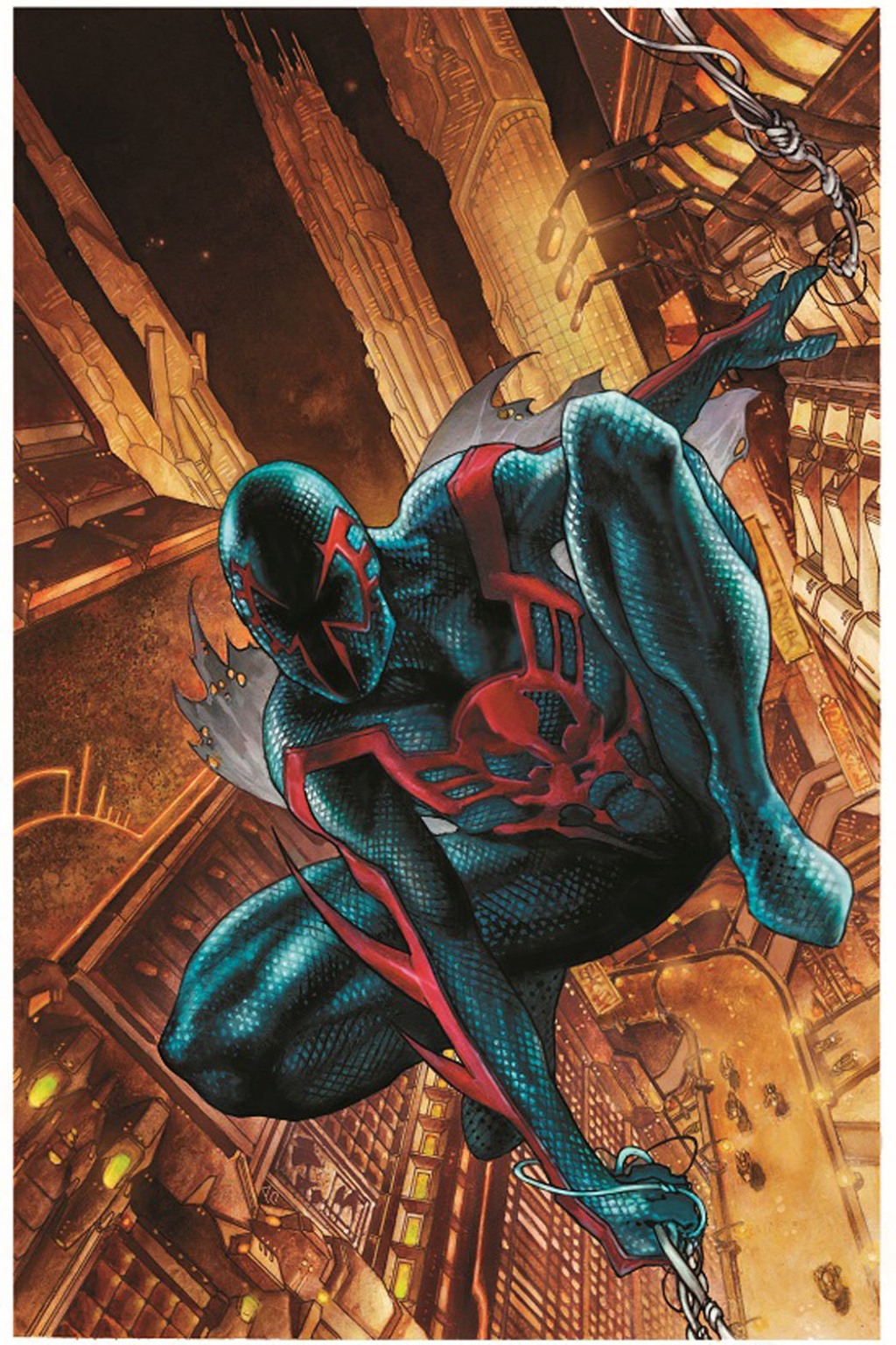 Spider-Man 2099 is able to crawl on walls and creates his own webs organically, much like Sam Raimi and Tobey Maguire’s version of Spider-Man. He also got some different skills that can take enemies off guard with a deadly efficiency. While he’s not as strong as Parker’s Spidey, he has venomous fangs that pack a strong enough bite to take down the Hulk of 2099. He’s far quicker than most of the Spider family and is able to move fast enough to create copies of himself — much like the After Image Technique that Goku often uses in the DragonBall universe.

Miguel is usually teamed with his own personal Siri in Lyla, an artificial intelligence that assists him on his missions. Miguel also uses time portals to travel back and forth in reality, often putting him into direct contact with Peter Parker and other members sharing his same code name. He’s able to communicate telepathically, and with his near-impervious suit, he’s in a league of his own when it comes to the advantage in a fight. Did we mention that he’s one of the very few that has wielded the mighty Mjolnir, the hammer of Thor? Apparently, he is worthy not only of the mantle of Thor, but of Spider-Man as well.

When Miguel appeared in the Spider-Verse comic series, he was seen as part of the team that was assembled to have the last stand against Morlun and the Inheritors — villains that traveled from dimension to dimension, hunting down and draining the life forces of anyone sharing the spider-totem connection of Spider-Man. He joined Spider-Ham, Lady Spider and dozens of others in stopping the threat, though there were many others that didn’t survive the battles spread across the series.

In Spider-Man: Into the Spider-Verse, Miguel appears in the post-credits scene, and we see him having a conversation with Lyla. He’s been aware of the dimension-jumping events of the film, and decides to travel to where it all began — the Spider-Man dimension of the animated show from 1967, where he encounters the original cartoon web-slinger. Of course, there’s an immediate confusion about the two Spider-Men bumping into each other, climaxing in a tribute to a popular meme. Rounding out the scene is a cameo by J. Jonah Jameson, who hasn’t been seen on the big screen since 2007’s Spider-Man 3.

So, what does including the intense Spider-Man 2099 mean for Sony’s Spidey universe?

It’s safe to say that we won’t likely be seeing Miguel brutalizing his villains, but his style of fighting would likely put him into direct conflict with Miles and Peter. Also, now that we’re seeing all the dimensions accessible to Miguel, we might even get some other versions of Spider-Man that may seem even more interesting. Could you imagine a Spider-Man from the Marvel Zombies universe? Or Peter Parquagh, the assistant to Sir Nicholas Fury in the Marvel 1602 universe? Miguel’s appearance kicks open the doors to these kinds of new worlds and even more — not just for the new heroes, but hundreds of villains as well. In the comics, the villain Morlun and the Inheritors traveled from dimension to dimension, hunting down and draining the life forces of anyone sharing the connection of Spider-Man. It’s easy to imagine that he would serve as a Thanes-like antagonist for the Spider-Verse.

With Sony including Spider-Man 2099 in its Spider-Verse film, it will be interesting to see where the studio plans on taking the future of this shared franchise. Venom has grossed more than $800 million globally, and that shows that people have an appetite for more web-slinging fun. Having Miguel O’ Hara joining the ranks adds an even wider palette of diversity to appear onscreen.