To launch the animated feature Spider-Man: Into the Spider-Verse, Sony has built a campaign around getting fans talking about its most unusual and unexpected Spider-Man project to date. Screenings, fan Q&A sessions and convention appearances have generated some of the franchise’s most positive reviews to date and has the movie tracking to land in the $30-35 million opening weekend range.

While previous movies have focused on the Peter Parker incarnation of Spider-Man, this week’s release introduces not one but several alternate versions of Spider-Man that will be new to moviegoers but are well known to comics readers. Characters including Ultimate Spider-Man Miles Morales, Spider-Man Noir, Spider-Gwen and Spider-Ham. All those characters, as well as an older version of Peter Parker, come together because a dimensional rift has opened up and threatens all of reality unless they can stop it.

The first poster flips the perspective to show Ultimate Spider-Man right-side-up but dropping toward the city skyline below him. There’s no additional copy on the one-sheet, but it does do a great job of showing off the visual look of the movie and introducing audiences to the notion that this is not your ordinary Spider-Man movie.

A whole bunch of Spider people are swinging and coasting through the air on the next one-sheet, offering one of the first full looks at more of the cast. Those looks were even clearer on a series of character posters that came shortly thereafter, each one featuring a different universe’s Spider hero.

The Real3D poster focuses just on three of the characters, Peter Parker Spider-Man, Miles Morales Spider-Man and Spider-Gwen, showing the trio climbing the side of a building as we look down toward the street. The attitudes of all three are on display, with Parker drinking a cup of coffee, Morales ready for action while Gwen is spinning a web on to the next adventure.

The first trailer (15.3 million views on YouTube) debuted last December, when the movie was still scheduled for July of this year. It opens with Spider-Man fighting crime and swinging through the streets and doing what he does. Eventually he takes off his mask and reveals that yes, it’s Miles Morales who’s doing the web-slinging. But then we’re told this is a universe with more than one Spidey and footage is replayed, but flickering in and out are scenes of another Spider-Man. At the end, we see Miles and a shadowy figure sitting on a subway bench as he asks, “How many of us are there?”

After the movie was rescheduled for later in the year, a second trailer (30 million views on YouTube) was released in June. This one uses the relationship between Miles and his police officer father as one of the central elements of the story. Through some sort of dimensional shenanigans Miles winds up meeting Peter Parker, who offers some advice on how to be Spider-Man, mostly involving not doing what he did but finding his own way. There’s action and humor and, at the end, Spider-Gwen.

Peter Parker himself narrates the third trailer (21 million views on YouTube) from early October with footage and dialogue that references at least some of the previous live-action movies and takes a meta approach. The focus then turns to Miles and we see a dimensional rift being opened bringing Peter into Miles’ world. They’re not the only ones as we see Spider-Gwen, Spider-Ham and others arrive as well. They all have to work together to close the rift and save all the universes, all while having to fight the usual array of bad guys as well. 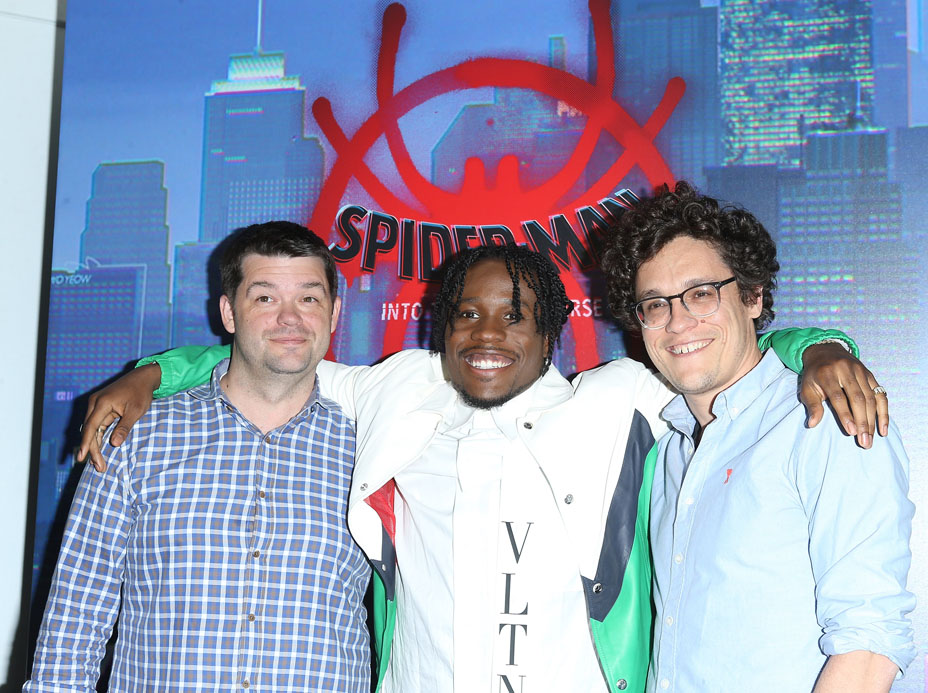 Sony’s presentation at CinemaCon this past April offered the studio to kick off the publicity portion of the campaign, offering press and industry insiders in attendance a first look at footage from the movie. Producers Chris Miller and Phil Lord also provided updates on some of the voice cast, which includes Shameik Moore as Morales and Mahershala Ali as his uncle.

Promotional activities close to release date were announced for New York Comic-Con in October. That included showing the crowd 35 minutes of footage from the movie. The cast and crew also appeared to talk about how unique the story was and what people could expect. A sizzle reel of footage from events at London and Paris Comic-Cons was released to help expand the reach of those appearances. The filmmakers also came to CTN animation eXpo in November to show off more footage and talk more about the movie.

An international “extended look” in early November offered more glimpses at the different Spider People in the story. That was followed later in the month by the first clip, which shows Peter teaching Miles some tricks to being a Spider Person before they encounter Spider-Gwen. At the same time Sony announced plans to develop not only a sequel to this movie but also a spinoff featuring the various female Spider heroes. That seemed to be in response to the almost unanimously positive tone of early reviews as well as the buzz that had built up from previous publicity efforts.

An augmented reality experience was launched in late November, with a mobile-optimized website that allowed visitors, using their device’s camera, to jump into the world of the movie and interact with Spider-Man, taking photos that could then be shared online.

Late November saw the release of the first clip, which shows Peter teaching Miles some of the tricks to being an effective Spider hero. Over the next couple weeks additional clips would introduce audiences to Spider-Ham and Spider-Gwen as well as offer extended looks at the relationship between Miles and his father and a scene of Peter and Miles breaking into a research facility.

While it’s not based exactly on Marvel’s 2014 “Spider-Verse” comics event, the movie does share that series’ premise of a single threat bringing together Spider-based heroes from across dimensions. So it makes sense that Marvel would, in June, use the movie’s upcoming release to announce a sequel, “Spider-Geddon,” that launched this past October. Promotional partners include:

? The Super Gaming League announced three Minecraft-based challenges for its players, tied to the movie featuring locations from the film and more. It also offered early screening tickets for players.

? General Mills put out co-branded packaging for some of its cereals, offering movie decals in those packages. It supported that campaign with paid social posts and more.

? Adobe ran two programs to promote Adobe Creative Cloud. One asked people to send in their original fan art and one encouraged people to take a picture of their city, manipulate it using one of Adobe’s tools and share the finished product on social media.

? Discovery Education offered a “Virtual Field Trip” to students that allowed them to explore how the combination of science, art and math helped make the movie.

? Synchrony, which ran online ads encouraging people to “save like a hero” at the bank.

Various Marvel video games like Future Fight and Marvel Champions promoted the availability of material and characters that was either directly inspired by and tied to the movie or at least featured the same characters. There was also a regular drumbeat of promotions of the movie’s soundtrack, starting in October with the release of a video for “Sunflower” by Post Malone and Swae Lee and continuing with promotions for “Way Up” by Jaden Smith.

Sony started running advertisements on Twitter in mid-November with a series of short videos like this. Short videos were also run as pre-roll on YouTube that introduced people to Miles Morales and other characters.

In the weeks leading up to release the movie was given a boost not only by additional positive reviews but also by nominations from the Golden Globes, Annie Awards, New York Film Critic’s Circle, Chicago Film Critics and more. Those happened around the same time Sony launched special preview screenings at locations around the country, some of which featured members of the cast in attendance. Key among those was an event at New York City’s Arclight Theater included another Q&A with the cast and crew.

Just days before the movie hit theaters Fandango released an exclusive clip showing all the various Spider heroes coming together for the first time.

From the moment the movie was announced it’s been positioned as not the kind of Spider-Man film audiences might be expecting. From the multi-dimensional story and characters to the diverse characters and voice cast, it’s been communicated loud and clear that it’s about more than just Peter Parker’s tension between great power and great responsibility.

To get that message out, Sony has engaged in a series of events, sneak peaks, first looks and events, from San Diego Comic-Con to the promotions for students, PlayStation members and other subsets of the audience. That has worked to build up anticipation, which has already resulted in the announcement of future films.

'Spider-Man: Into the Spider-Verse': Film Review