On Nov. 12, the world lost comic book writer extraordinaire, cameo king and the face of Marvel Comics: Stan Lee. Yet,  now, even two months later, he still seems very much alive in the heart of Hollywood. That’s because, amongst other things, a group of Stan’s greatest friends, collaborators and fans all gathered for a night in a mega memorial in his honor called “Excelsior! A Celebration of the Amazing, Fantastic, Incredible & Uncanny Life of Stan Lee.”

On a typical night on Hollywood Boulevard, a gathering of superheroes wouldn’t be unusual. However, Wednesday’s celebration for their “Generalissimo,” as Stan was sometimes known, would challenge that notion. Dozens of spandex-clad heroes, ranging as widely as Spider-Man to Cable, mingled with celebrities like RZA and Mark Hamill, all with one thing in common: Stan Lee’s impact on their lives.

The entire crowd, cameras, stars and cosplayers gathered outside the TCL Chinese Theatre, next to Lee’s handprints, and were silenced by the sound of “Taps” played above the scene by a military bugler. Lee, a World War II veteran himself, was honored by a full color guard and dedication to his service to the country, where he was first assigned to write advertisements, skits and other informative recruitment/safety pieces. Lee’s daughter, J.C. Lee, led a group of military men and veterans to a round of “God Bless America.”

Hosting the show was Lee’s longtime friend and fan, filmmaker Kevin Smith, who was sure to note that Lee was “one of the best humans to ever walk the Earth” before inviting everyone to enter the theater. The theater itself was transformed into a monument to the man, with some of his most beloved comics on display — from the first appearance of Spider-Man and Black Panther to some of the most iconic adventures of the Fantastic Four. Costumes from the Sony-led Spider-Man films were also displayed inside glass cases, but it was the energy in the room that truly punctuated the evening.

Smith put it best at the beginning of the tribute: “This is not a funeral, though he’s gone. This is a celebration! That’s how religions start. We all agree that we saw him tonight and that he’s no longer gone. Stan’s spirit is here with us.” With all the outpourings of love in the room, it’d be hard to argue otherwise. Copious footage of Lee played throughout the evening, including a touching clip of him singing “Cocktails for Two,” with all the energy of someone in their twenties, as his assistants set up his microphone.

Smith kicked off the evening with the story of how he met Stan for his movie, Mallrats, and the grand efforts it took to convince the then less-recognizable legend to appear in his film after Lee read the script and remarked “I would never say this.” Smith admitted that Lee was never quite accepting or aware of his successes, despite his put-on braggadocio. “This was a guy who spent his life dreaming of writing the great American novel, and he didn’t realize that he had been successful and fulfilled his dreams one thousand times over,” Smith said. Smith also admitted that “it was hard to understand that we were friends” before eventually coming to realize just how much Lee loved him.

This would set the tone for the night, as attendees laughed together over assembled clips of Lee’s cameos in various films, genuflected over powerful quotes from his comics and enjoyed impressive panels of guests who shared their personal stories of Lee. First up, fresh off the successes of Spider-Man: Into the Spider-Verse, was a panel that included producers Amy Pascal, Avi Arad, Chris Miller and Phil Lord. Arad, Lee’s longtime collaborator in bringing Marvel to Hollywood, spoke about how Stan persevered through Marvel’s ups and downs, certain that Marvel was the single best universe for Hollywood storytelling.

Pascal reflected on how it was the soap opera of Spider-Man that made these stories so special, before offering one of the few pokes at Lee, “He wasn’t that nice. Sometimes he was grouchy. He was pretty honest, and I was grateful for that.” Smith cringed and Lord bounced the conversation back on track, expressing, “Stan was a compulsive creative. He couldn’t turn it off. He made ordinary people feel extraordinary!” 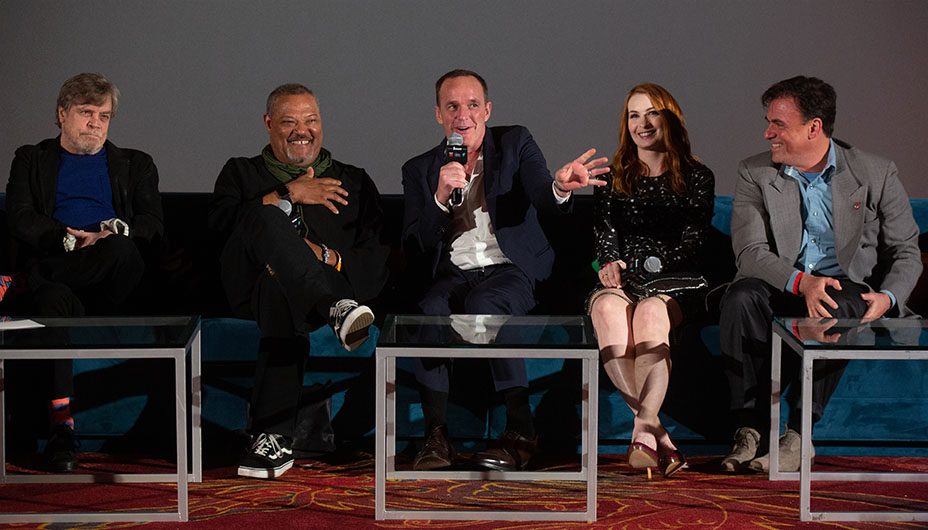 The next panel brought out the big stars who had shared the screen with Lee throughout the years, including Mark Hamill, Laurence Fishburne, Clark Gregg and Felicia Day. Hamill offered the best impression of Lee’s unique voice, as he channeled the comic creator’s response to how he remained so youthful into his nineties: “Well, Mark, I like to get up early in the morning and work very, very hard all day long.” Hamill implored the audience to accept that everyone has had a personal relationship with Lee and that, “If you saw him, you also know him. He was who he was.”

Agents of S.H.I.E.L.D. actor Clark Gregg noted of Lee’s work, “I feel carried by his work. I feel inspired by it.” Fantastic Four: Rise of the Silver Surfer actor Doug Jones, who portrayed the Surfer (Lee’s favorite character to write for), appeared by video clip to quote Silver Surfer No. 3 in a tear-jerking moment, “If die I must — let it be as I have lived — soaring swift and silent — striving for the right — no matter what the cost!” 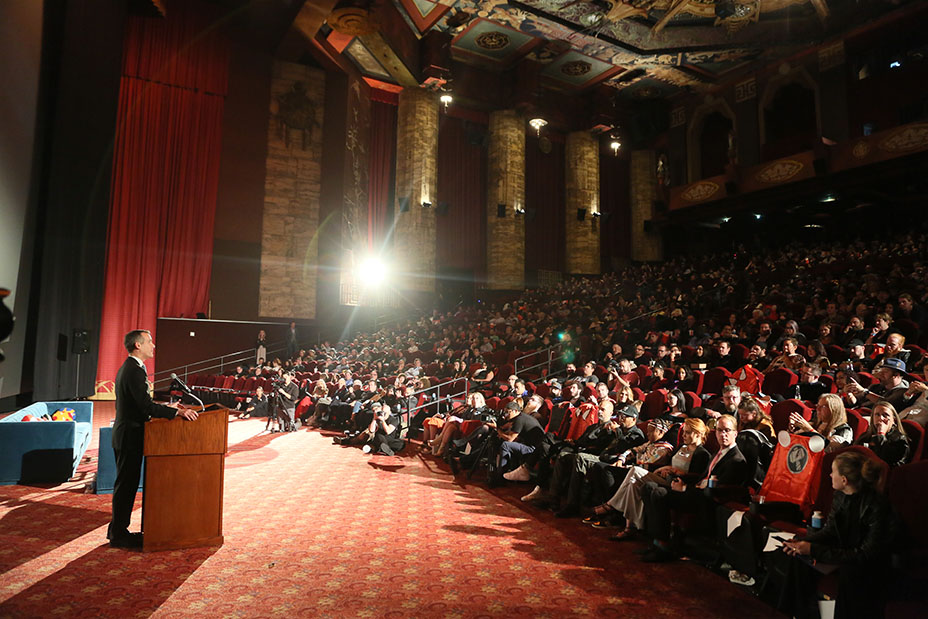 Perhaps the biggest moment of the night came with the appearance of Los Angeles Mayor Eric Garcetti, who detailed Lee’s love affair with L.A. before running through a catalogue of his own nerdiness, including a proclamation that no one could offer him enough money to let go of his complete collection of original copies of the Wolverine comic series. Garcetti then stated, “Stan Lee was a mensch who always fought for the underdog,” before presenting Stan’s former company, Stan Lee’s POW! Entertainment, with Garcetti’s third-ever “Key to the City,” carved from a fallen tree and engraved with Stan’s image and catchphrase, “Excelsior!”

Lee, known for his unorthodox methods of community building and progressive values, found an ally in RZA, who expressed that the Wu-Tang Clan was partially inspired by the comic creator’s work, allowing themselves to take on their own superhero names. The room was silent while he recited a famous 1968 passage from Stan’s Soapbox, a passage that Stan would sometimes insert between the pages of his comics, decrying bigotry in all its forms: “Let’s lay it right on the line. Bigotry and racism are among the deadliest social ills plaguing the world today.” Laurence Fishburne returned to punctuate this silence with a stirring live rendition of Edgar Allan Poe’s “The Raven,” a favorite of Stan Lee’s; for a moment, the whole world seemed to stop for the haunting poem.

The night was rounded out with several panels of Lee’s comics collaborators, including Joe Quesada, Marv Wolfman, George Perez, Bill Sienkiewicz, Jeph Loeb and Stephen Wacker. Each recounted their personal experiences with Lee and how he either inspired them or took personal time out of his day to make them feel special and invited to the comics community. Quesada, former editor-in-chief of Marvel Comics, emphasized how much he strived to live up to Lee’s ideals when running the company himself, suggesting that, when Marvel adheres to Stan’s fan-oriented principals, then the company is doing its best.

However, it was Wacker, who sat in Stan’s former seat as the editor of the Amazing Spider-Man comic, who addressed the elephant in the room head on: Bill Maher’s recent derogatory comments about Lee’s legacy and the value of comic art. After a night where Lee was consistently compared to Shakespeare, Wacker said that perhaps everyone understood that there were more “important” things in the world, and in art, than comics and pop culture, but that this kind of escapism and joy “is what we are fighting these fights for,” before ending the night on a resounding “Excelsior.” 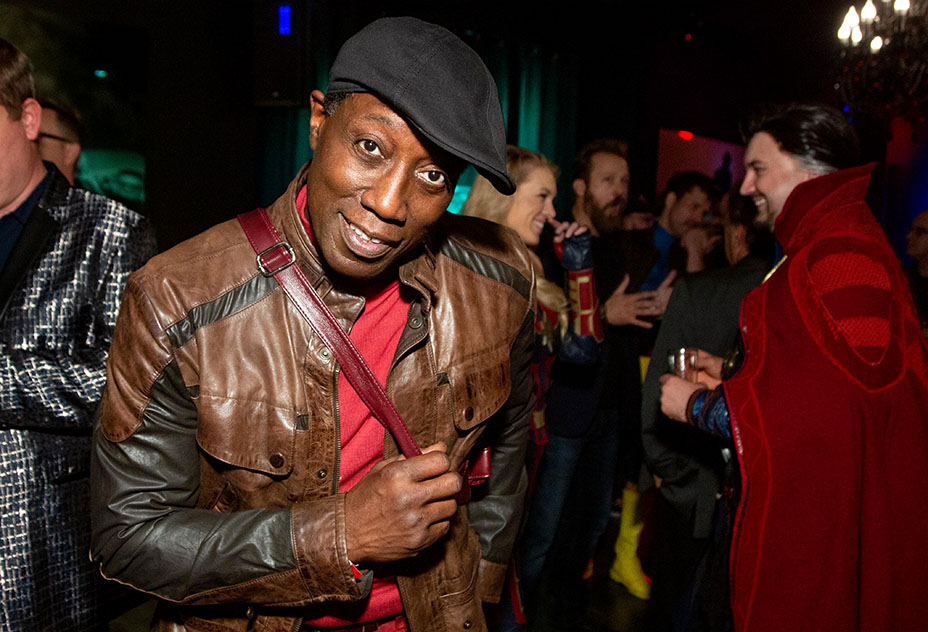 On and on the night stretched, with panel after panel sharing their stories of Lee, as if to say that, if the night never ended, we would never have to truly let the creator go. Approaching midnight, Kevin Smith assured the crowds, “Don’t worry, we only have a week’s worth of panels to go,” before launching into his final story of the night.

Smith shared a story about a time that he invited the elderly Stan to his home, spending a spirited afternoon together. Yet, just before seeing him off, Stan tripped precariously at the top of Smith’s stairs, a situation that could have seen him gravely injured. Smith’s mind went to thoughts of the headlines the next day, remarking, “I broke Stan during my time with him!”

However, at the last minute, it was his road manager, Max Anderson, who swooped in for the save, catching Stan in his arms and immediately bouncing him back to safety. Smith called Max up on stage to a round of applause, where a teary-eyed Max told the crowd, “Stan isn’t looking down on us, he’s here with us. Inside all of you.”

Moments later, the crowd was singing the Spider-Man cartoon theme song, shouting “Excelsior” and heading home, given one final task by Max Anderson: “Share your stories, that’s how Stan lives on.” 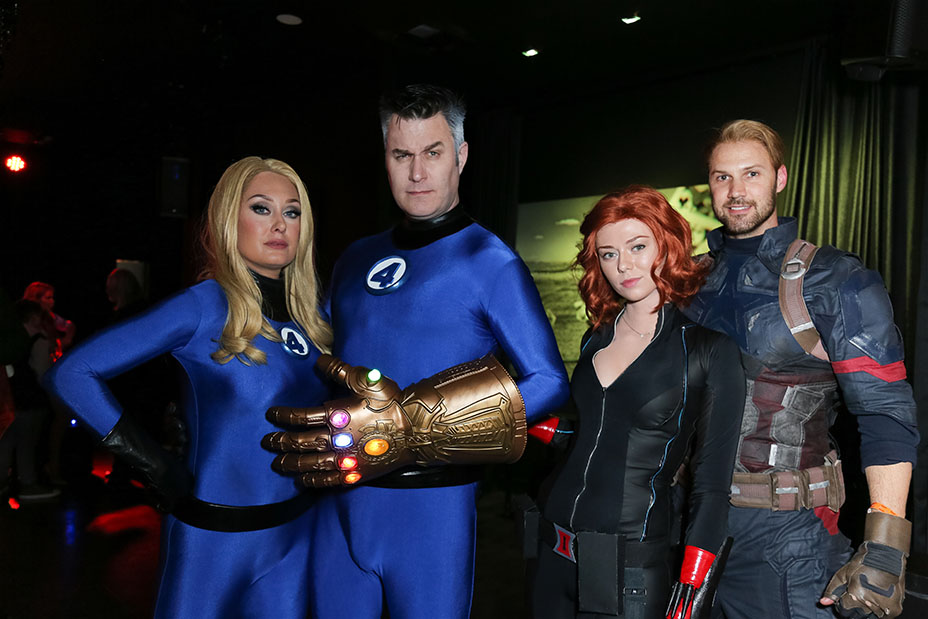