One of Stan Lee’s final creations is coming to life at last. The late comic book legend spent years developing a universe featuring dozens of characters, and now the first chapter is set to debut as an audio drama this summer.

Audible will release Stan Lee’s Alliances: A Trick of Light on June 27. The Hollywood Reporter has the first trailer, which, like the actual audio drama, includes an introduction Lee recorded before his death in November 2018.

Lee created the universe with Ryan Silbert and Luke Lieberman, the latter of whom has fond memories of joining Lee for the premiere for 2000’s X-Men and who started his career at Lee’s Pow! Entertainment. Lee penned A Trick of Light with Kat Rosenfield, with the story centering on a mysterious young woman named Nia.

Nia becomes intertwined with Midwestern teenager Cameron Ackerson, who travels to the Great Lakes triangle as part of his quest to become a YouTube star. It’s there that he is granted the power to see and hear a new reality. Nia and Cameron use this power to try to create a more righteous online universe but end up on the wrong side of a shadowy group called OPTIC, which hunts them down. If that’s not enough, a galactic threat emerges that could end all of humanity.

Many of Lee’s most famous creations, such as the Fantastic Four and Spider-Man, were rooted in the science of the 1960s and gained their powers through radiation. With A Trick of Light, Lee was interested in today’s technologies.

“One of the things he was looking at with respect to VR and AR and [the internet] was our ability to craft these versions of ourselves, these avatars that we present to the world and what the relationship is between that and who we really are,” Lieberman tells THR.

While Lee was known for comics, he came up listening to the radio dramas of his youth. 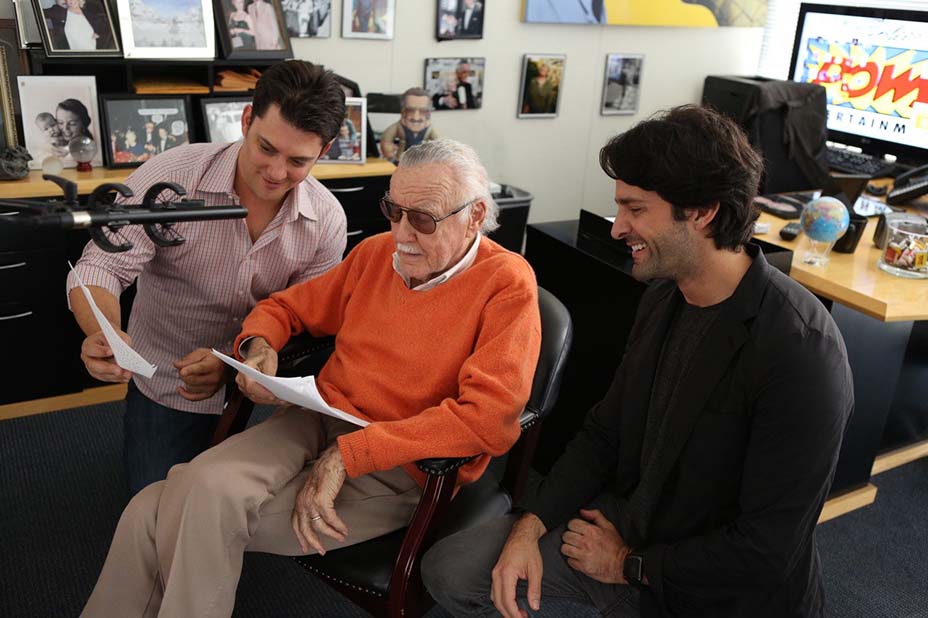 When Lee died, Marvel Studios president Kevin Feige noted that part of him thought the comic book creator would live forever. It’s sentiment the Trick of Light team can relate to as they prepare to unleash the drama.

“It never occurred to us that he wouldn’t be able to listen to the final recording of it,” says Silbert.

Lee was able to read a final manuscript of the book before his death, and his collaborators say he was excited to share the audio version with his fans. One thing that intrigued him about audio was the collaborative nature between artist and audience, as it is the listeners who must create the images in their minds.

“I had an image in my head of being able to go over to his house and listen to this with him and share this part of it,” says Lieberman. “It’s a big deal for us to finally bring this out.”

A Trick of Light is the first of what could be a series of audio dramas, and is part of Audible’s push into original content.

Stan Lee’s Alliances: A Trick of Light is now available for preorder on Audible’s website.