“Wow.” That’s all I could manage to think and even say aloud as I stared up at the enormous, full-scale Millennium Falcon in Disneyland’s newest attraction, Star Wars: Galaxy’s Edge, as I visited with a small group of media last week for a top secret (they even took our phones) preview. That was just the start of the tour.

When the attraction opens this summer (date still unknown) fans, at best, will believe they have been transported into the world of Star Wars — Black Spire Outpost on the planet Batuu to be exact. At worst, they will feel as though the just walked on the set of a Star Wars film. The attention to detail, such as the imperfections in the buildings to make them look as though they have been there for centuries, is painstaking. There are areas mixed in for both the First Order and Resistance, along with locations for run-of-the-mill, scruffy-looking nerf herders and pirates.

The 14-acre, themed destination at Disneyland Park in Anaheim, CA. will be unlike any attraction experienced before. With two state-of-the-art rides (Star Wars: Rise of the Resistance and Millennium Falcon: Smugglers Run), a plethora of shops and restaurants (all in the theme of Star Wars so as not to feel like they are part of a Disney stop), jaw-dropping spectacles and full-scale droids milling about, the land delivers on the ambitious project Disney CEO Bob Iger foretold when he announced the park at the D23 Expo in August 2015. Here is what I saw.

Black Spire Outpost on the planet Batuu (the land) 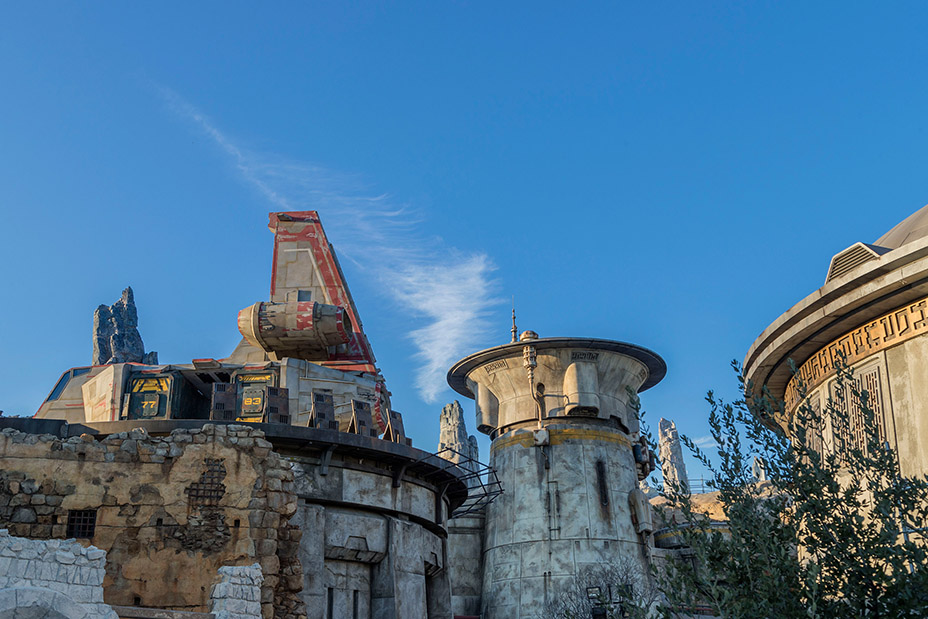 I didn’t realize how big the park was until we were let inside. Designers for the Galaxy’s Edge traveled the world, including Istanbul and Morocco, to draw inspiration for their designs. The outpost looks lived in and the intentional imperfections make the area feel like it has been around for hundreds of years. There will be three entrances into Galaxy’s Edge, which is located north of Frontierland, where Big Thunder Ranch used to be, that also required the reconfiguration of the Disneyland Railroad and Rivers of America. Scents and music will be piped into the land, including original themes created especially for the land by Star Wars composer John Williams. However, since it was still under construction, journalists did not get to experience any of that. Although, we did get to hear a bit of the new Williams score. Park officials were cagey about how it will be incorporated into the land. For the most part, the outside of the buildings of Black Spire Outpost, as well as the massive remains of its once-towering ancient trees, are complete. Inside some of the shops was another matter. Several were still under construction, but major pieces, such as the bar itself inside Oga’s Cantina, were in place. Ships were completed and located through the land. There was a full-sized X-wing, TIE fighter and, of course, the Falcon. There were also a number of landspeeders, which will be immobile — just for looks. 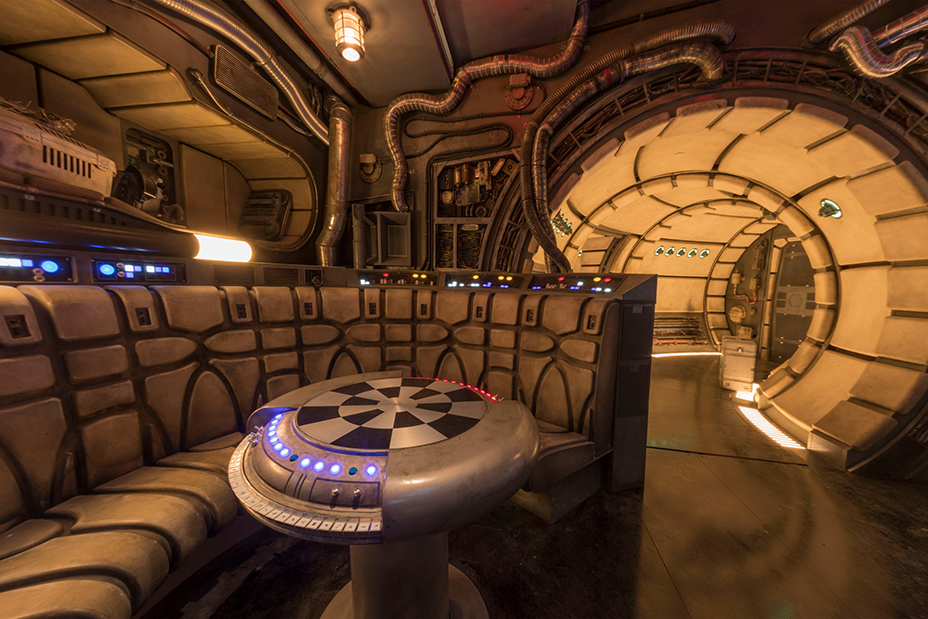 Star Wars: Galaxy’s Edge will feature two state-of-the-art rides, Star Wars: Rise of the Resistance and Millennium Falcon: Smugglers Run. We toured both rides, but they were still under construction so there was only so much we could do. The first was Rise of the Resistance, which is the longest ride Disney has ever featured. Officials would not give the exact length. Basically, guests will be captured and taken aboard a Star Destroyer. The most striking part of this ride, from what we were shown, was the enormity — it’s truly massive, like the actual size of a hanger on a Star Destroyer in the films. For scale, the window or entrance to the bay for ships was 100-feet in size. There was also one complete TIE fighter in the bay. In another bay, which we were not shown, there are two full-sized AT-ATs. Characters featured in the ride include Kylo Ren (Adam Driver), Rey (Daisy Ridley), Finn (John Boyega) and Poe Dameron (Oscar Isaac). The ride itself is partially completed on foot, but mostly done in a trackless vehicle that will take guests around the Star Destroyer as they try to make their escape. We did not do this but saw a demo of the vehicle in use. 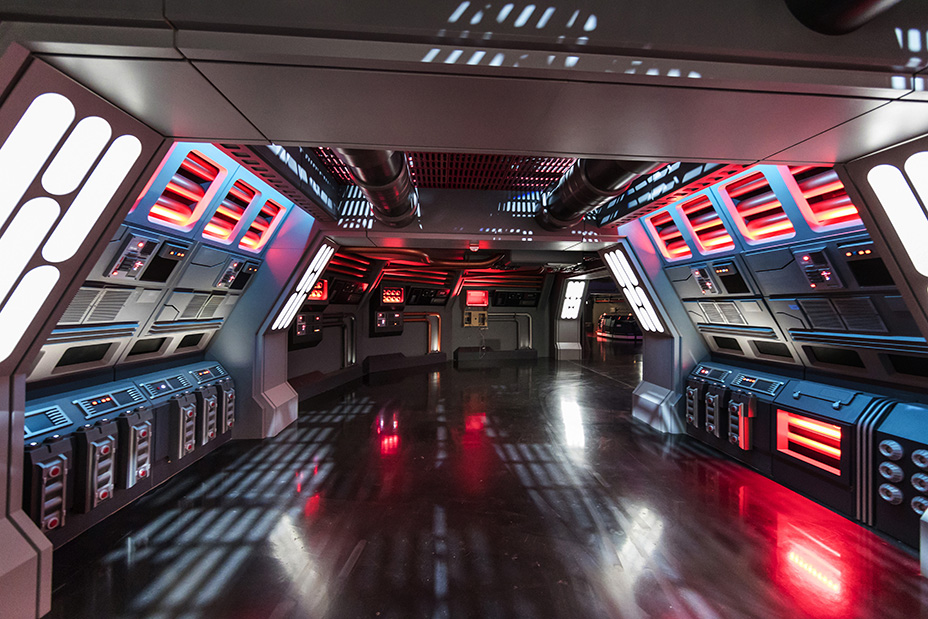 Millennium Falcon: Smugglers Run was probably the most complete destination at the park we saw. There is a full-sized Falcon in the park that guests will be able to see, but not touch. The line to get on the ride will take guests higher and higher above that Falcon until they believe they are boarding it. The doors open, and boom, you are on the Millennium Falcon. For yours truly, it was a pinch-me moment. Guests, in groups, are free to explore the main compartment of the Falcon, until it is their turn in the cockpit. Then, when those doors open, jaws will drop. Mine did. The cockpit is exact, down to every last detail. There are six seats (for two pilots, two gunners and two flight engineers) and all the buttons and levers work. All of them. We did not get to experience the actual ride, just explore the ship, but the plot involves helping space pirate leader Hondo Ohnaka (one of the park’s most advanced animatronics ever), who is featured in the Star Wars: The Clone Wars series.

The food and drink 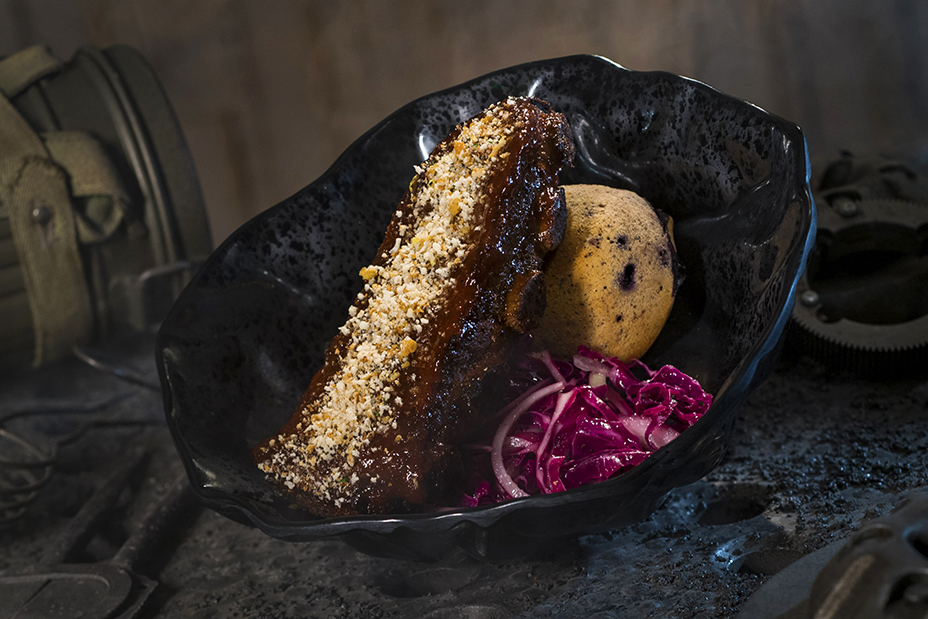 There will be a number of spots to grab a bite to eat and drink inside Galaxy’s Edge. We toured three: Oga’s Cantina; Docking Bay 7 Food and Cargo; and Ronto Roasters. All were still under construction, but enough was done to get an idea of the layout and space. Oga’s — likely the most popular spot because, come on, it is a Star Wars cantina — may be a tight fit when guests pour in (no pun intended). The other locations are much more spacious. The locations are unique in that they, the menus and the food are all in the theme of Star Wars — we got to sample some food before going into Galaxy’s Edge. Oga’s has the distinction of being the first location inside Disneyland to sell alcohol (10 different drinks, including a Fuzzy Tauntaun, Dagobah Slug Slinger, Bloody Rancor and Bespin Fizz). This is a big deal as previously only Disney California Adventure Park offered adult beverages. However, those cantina drinks must be finished inside the location, no wandering around. For mixed adult drinks, we sampled the Fuzzy Tauntaun, which was yellow in color and had a fun foam on top that never deflated. Chefs wouldn’t share that secret. It was fruity, not too strong and reminded me of a Fuzzy Navel. We also sampled the beer, called the Bad Motivator IPA. It was delicious and, for an IPA, not too hoppy. I would try it again. (Side note: Unfortunately, there won’t be a live band in Oga’s, but there is music thanks to DJ R-3X, otherwise known as Rex, the former Starspeeder 3000 pilot droid from the original Star Tours in Disneyland. He wasn’t installed in the area yet, but we got to see him do his thing in another location before the tour.)

My favorite food item we tried among a smorgasbord of interesting and tasty dishes was the Smoked Kaadu Ribs sold at Docking Bay 7 Food and Cargo. They were sweet and had a fantastic kick. My favorite drink was the Sour Sarlacc, sold at Ronto Roasters, which was tart, refreshing and not too sweet. We also sampled a yet-to-be-named raspberry cake and chocolate mousse dessert, also sold at Docking Bay 7 Food and Cargo.

The merch and shops 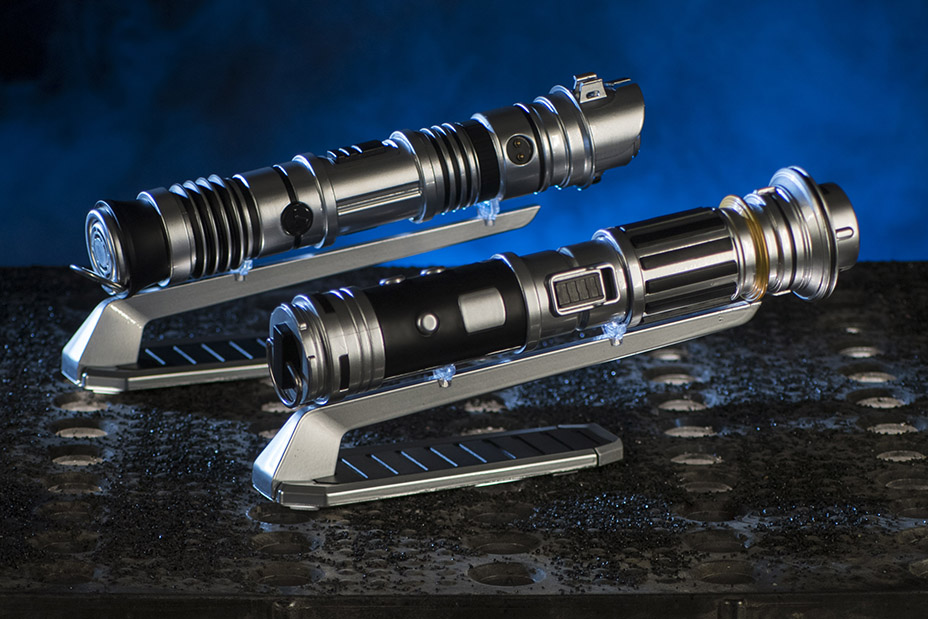 There are a number of spots to get merchandise in Galaxy’s Edge, including Savi’s Workshop, the Droid Depot, Dok-Ondar’s Den of Antiquities and Toydarian Toymaker. We toured a few of these shops, but, again, they were under construction. However, before the tour, we were shown a number of toys and items that will be sold at those assorted stops throughout the land. The most striking aspect to me was how they didn’t stand out as Disney toys, but felt more like those that would be found on a Star Wars planet, which is exactly what the park is going for. I was most intrigued by Savi’s Workshop, where a limited number of builders at a time (14) will be able to craft their own unique lightsabers, which includes picking out their own kyber crystal (the magic stones that make the sabers work). These are not cheap, plastic lightsaber toys — these are heavy-duty, which is why only so many people can do the experience at a time. Officials estimated it would take one person at least 20 minutes to complete their lightsaber. Unfortunately, they did not say how much it would cost, but it’s safe to assume it won’t be cheap.

Droid Depot also sounds like it will be a fun, unique experience, with guests getting to make their own mini R-series or BB-series droid, which we got to see a little of before the tour. Guests will pick pieces and parts off a conveyor belt to build one of two core models and customize with various parts and colors. The neatest part is that the droid will be capable of interacting with elements in the land as guests roam around. Just be careful it doesn’t get stepped on.

The app and land cast

Star Wars: Galaxy’s Edge will be the first area within the Disney park designed to fully integrate with the Play Disney Parks mobile app, which was introduced last year. Since the area was still under construction — and our phones were taken before the tour — we did not get to try the app. However, it is worth discussing. Basically, the app will allow guests to find secrets and Easter eggs strewn throughout the land, such as translating a galactic language, participating in smaller side missions and learning about hidden treasures inside crates and containers. The app will also allow guests to interact with the droids roaming around, as well as ships, display screens and even drinking fountains. Disney cast members (park staff) will also be a large part of the land. They will all have newly designed costumes, which we previewed, and they will have character backstories to better interact in the world with guests. One of the more interesting parts of the costume aspect is that the staff will get to choose their ensemble from a large array of options. They will be allowed to mix and match some looks to give their own unique style.

While there was still construction going on, and we did not have access to a number of places because of it, the size and scale of Galaxy’s Edge was impressive. I felt like a big kid at times and like I was on a movie set during others. 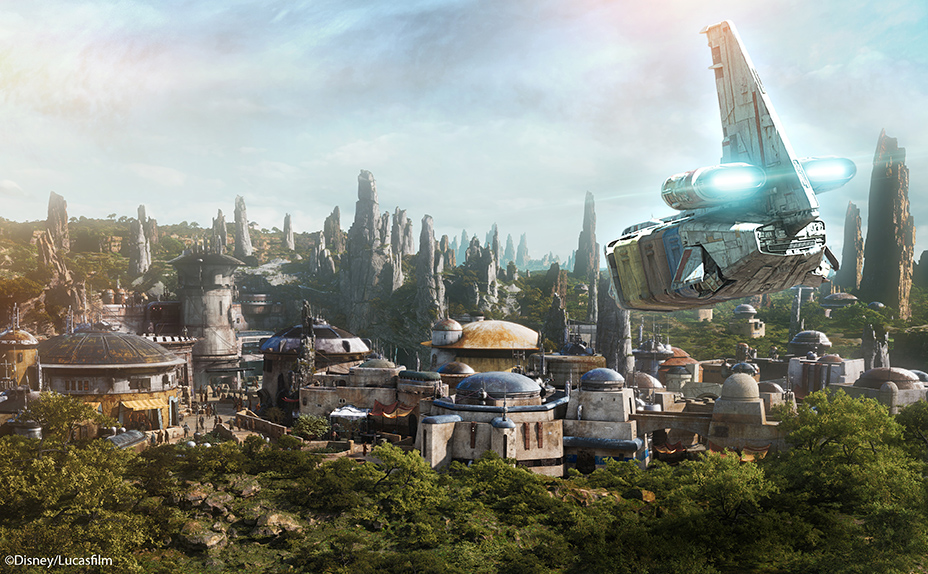