It is one of the most famous mistakes in the Star Wars film franchise: the head-banging Stormtrooper in A New Hope.

It might be missed in the first few viewings of the 1977 classic, but once it is noticed, it can never be unseen. As a group of Stormtroopers walk into a control room, one of them unceremoniously bangs his head on the door ceiling.

Now, as the film that started the worldwide space adventure phenomenon turns 40, Heat Vision tracked down the U.K.-based actor who says he was the clumsy Stormtrooper. Laurie Goode, who was 31 during production, explains just what happened that day and his reaction when he saw the film for the first time. He also reveals that at least one other actor claimed to be that Stormtrooper.

How did you come to be cast in A New Hope?

It was a last-minute casting for me. I received a phone call from my agent, who asked me for my measurement details. Having told her, I was then asked if I would be free to replace fellow actor Peter Dukes on something called Star Wars, as Peter had phoned in sick.

What happened that day when you hit your head?

On the second day of filming, I developed an upset stomach. By midmorning I had paid three to four visits to the loo/bathroom. Having re-dressed myself and returned to the set, I felt the need to rush back to the gents’ toilets, but I was placed in [the] shot. On about the fourth take, as I shuffled along, I felt my stomach rumbling, and “bang,” I hit my head! As I wasn’t moving too fast, it was more of a scuffed bash, so it didn’t hurt, but as no one shouted “cut,” I thought the shot wasn’t wide enough for me to be in frame.

Which take was that? How many takes did you do of that scene?

I remember after the first two takes, we were told to hold our guns in our left hands as opposed to our right. So I believe the head bang happened on the fourth take — whatever number of takes we did, the head bang happened on the last take. When it first happened, that day I told my fellow actor on the film, Mark Kirby, that I hit my head, but we didn’t go for another take. 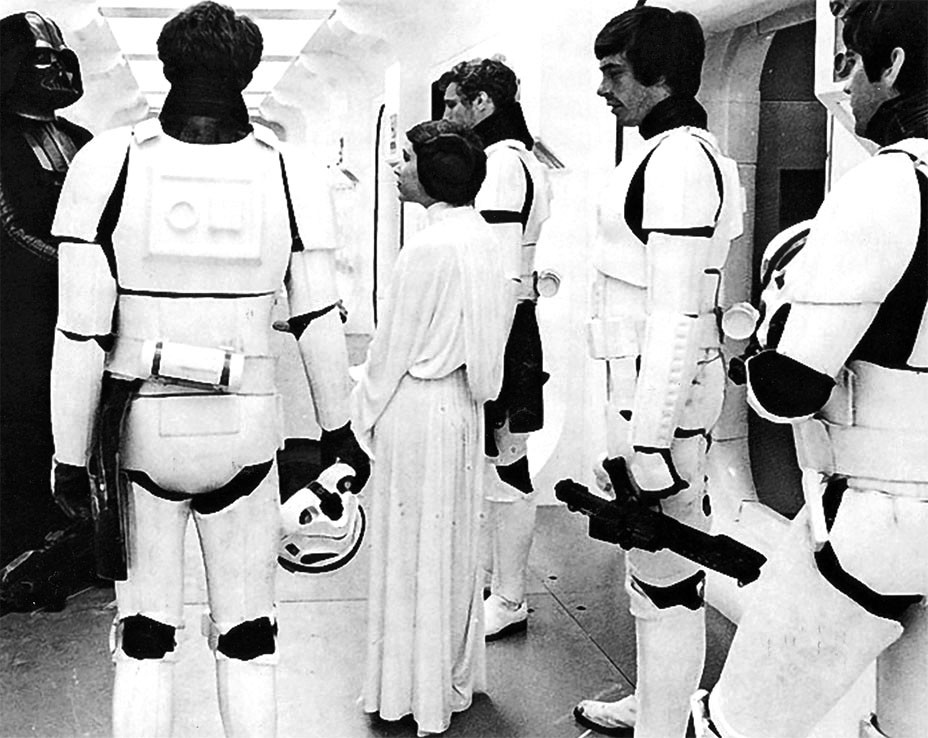 What did you think when you first saw the picture in the theater and realized they used that take?

Believing I probably wasn’t in frame, I expected it to end up on the cutting-room floor. But when I did see it in the cinema, I thought: “OMG, that’s me!” I’ve been telling people the story ever since it occurred. In fact, the blooper once landed a small role in a Star Wars-themed pop promo in 1999. The act was called The Indian Rope Man, who performed “Sunshine of Your Love.” You can see a fleeting shot of the milkman entering through a doorway, banging his head.

It is from an accident, but how does it feel to be a part of the Star Wars lore?

The first convention I attended, I think in 2006, I told one of the organizers that I was the Stormtrooper who banged his head, thinking he would say: “Great — that’s fantastic!” But he just shrugged his shoulders and told me he had heard that from so many others, adding [that] everyone was banging their heads! So, as I had no way of proving it, I thought I’d better keep quiet about it. As time marched on, people started telling me that [the late] Michael Leader was claiming the Stormtrooper blooper. So it left thinking, “How can he prove it?” That’s when I decided to speak up. I hear Michael has started to state a similar story. So after a while, and feeling rather peeved, I decided to write a song about the subject. It’s now out on iTunes, also on YouTube. It’s called, obviously: “Who Was the Stormtrooper Who Banged His Head?”

There is also a young filmmaker by the name of Jamie Stangroom, who has taken an interest in this subject. He’s keen to identify the real head-banging culprit. It’s a crowd-funded project, so maybe later than sooner, all Star Wars enthusiasts will have clearer evidence to draw their conclusions.