In a video that seems designed to have gone viral, Alden Ehrenreich was interrupted in the middle of a recent TV interview by Harrison Ford, who jokingly told him to “get out of my life.” The gag is simple: Ehrenreich has stepped into the shoes of one of Ford’s most iconic and beloved characters for the latest Star Wars Story: He’s playing Han Solo, and while Ford hasn’t always expressed love for the character or the Star Wars franchise, it’s still one of his biggest claims to fame. This jokey moment speaks to what may have always been the largest concern of Solo: A Star Wars Story — no matter how bad the directorial upheaval on this film was, could any actor other than Ford play the scruffy nerf herder, and do it well?

The short answer is “not really.” Ehrenreich acquits himself as well as possible in Solo, but there’s never a point at which his performance becomes so convincing as to feel like a natural extension of the character we all fell in love with in the original Star Wars trilogy. Ehrenreich isn’t attempting to do a perfect impersonation of Ford, but does sound a bit more clipped and gruff than he did in his comic turn in the Coen Brothers’ Hail, Caesar! Yet even though Ehrenreich is embodying, as best he can, the larger-than-life character and actor, there’s simply too much excitement within the performance and the character, so much so that it feels at odds with Ford’s famously dismissive attitude toward Han Solo. It’s strange that such dismissiveness can translate into such a great performance, but that’s a major part of what makes Han so fascinating.

To be fair, Ehrenreich always had an uphill battle, as any young actor would in playing Han Solo. A decade ago, we nearly had a passing of the torch, symbolically, between Ford and a young actor in the Indiana Jones franchise. But Indiana Jones and the Kingdom of the Crystal Skull was not a big favorite with critics and audiences, and it even ended without allowing for Indy to pass the fedora and whip onto his long-lost son, played by Shia LaBeouf. LaBeouf, even at his most charming, wouldn’t cut the same type of heroic figure, just as Ehrenreich doesn’t in Solo. Part of that speaks to the script, by Lawrence Kasdan and his son Jon Kasdan. Though the elder Kasdan has a longstanding connection to the original trilogy, the version of Han Solo we meet here never feels like he’s close to being the world-weary, seen-it-all cynic that Obi-Wan Kenobi and Luke Skywalker meet in the Mos Eisley cantina.

As we first meet him, Han is a scruffy young man, but much more upbeat even after losing Qi’ra (Emilia Clarke), the young woman who grew up with him on the rough planet Corellia. Throughout the film, even after spending years in the Imperial Empire so that he could become a great pilot, Han has more energy and enthusiasm than in any of the original Star Wars films, in spite of the events of Solo taking place mere years before A New Hope. (Solo ends with Han winning the Millennium Falcon from Lando Calrissian and heading off to Tatooine to work with a gangster, never mentioned by name but clearly Jabba the Hutt.) Ehrenreich doesn’t feel much like Ford in this film, but then, the script doesn’t give the actor material that would line up with that of the character we know and love. 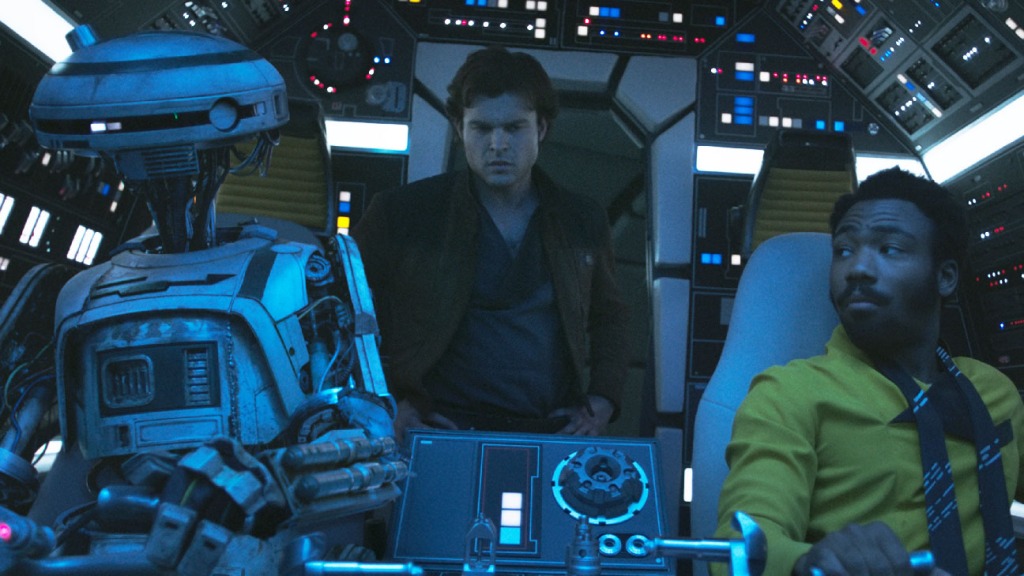 The contrast of performances is no starker than in the banter between Han and Lando, as portrayed by Donald Glover. The latter, much more so than Ehrenreich, embodies his character to the point where his line readings sound distinctively like that of Billy Dee Williams. In short, Glover’s doing something closer to a successful impression, along with having some of the best material in the film. Ehrenreich, probably wisely, isn’t trying to echo Ford in his line readings, but it only serves to show how different his performance is when held in contrast to Glover’s take on Williams’ performance.

But could any young actor have played Han Solo successfully? Leaving aside some surface-level criticisms — Ford is a bit taller than Ehrenreich, and this film doesn’t try to hide the younger actor’s height — Ehrenreich had an impossible task in front of him. Few actors in modern cinematic history loom so large over popular culture as Harrison Ford does; while Ehrenreich does try to make his Han feel like Ford’s (such as when young Han points his finger fiercely a la Ford), it can’t measure up. Thus is the case with Solo: A Star Wars Story, which may end with the promise of another Young Han Solo tale, but feels like a one-and-done prospect simply because Ford’s performance as Han Solo is so singular, so impossible to duplicate. Some things are best left alone.