There was an awakening of the Force in Orlando, Fla., over four days, as Jedi and Sith alike flocked to Star Wars Celebration.

Heat Vision braved the crowds of fans who slept on sidewalks overnight to get a first glimpse of The Last Jedi and Star Wars royalty such as George Lucas, Mark Hamill and Harrison Ford. Here, it’s time to break down the biggest takeaways from the convention:

The Last Jedi delivered on the hype

The Last Jedi panel gave away just enough to whip the audience into a frenzy without spoiling who Rey’s (Daisy Ridley) parents are or revealing much at all about the plot. There were new character details and a female-focused poster that’s already being hailed as one of the greatest in the franchise’s history. And of course, there was that trailer, coming just eight months ahead of the film’s release (a blink of an eye in blockbuster movie promotion).The first glimpse at The Last Jedi gave fans a strong sense of Episode VIII‘s tone and aesthetics and a light sampling of its narrative and characters. One silhouetted image of Luke muttering, “it’s time for the Jedi to end” told viewers just how similar to The Empire Strikes Back this film is shaping up to be — visually dark and ominous and narratively complex and varied. Who’s on board for not watching more Last Jedi trailers and going in cold to the movie in December? (As if anyone has that much self-control.)

The spinoffs stay under wraps

Those hoping to get clarity on the future of Star Wars beyond The Last Jedi were out of luck. There was no news about which spinoff will follow in Rogue One and the young Han solo movie as the third Star Wars stand-alone movie. (Sorry, Boba Fett fans.) Nor was there a surprise appearance from the young Han Solo cast or filmmakers. (Co-director Chris Miller tweeted Monday: “Sorry @philiplord & I couldn’t break from filming & make it to #SWCelebration. Can’t wait to show you how special this movie is!”) Disney has D23 in Anaheim in July, just one week before San Diego Comic-Con, which Star Wars has been absent from in recent years. That seems as likely a place as any for some of that spinoff news to start hitting.

There was one bit of post-Last Jedi news: Lucasfilm head Kathleen Kennedy did reveal in a Good Morning America that Carrie Fisher would not be appearing in Episode IX.

Carrie Fisher gets a royal goodbye

Fisher got two moving tributes, first during Thursday’s convention opener, which saw Lucas speaking with remarkable candor about his late princess (followed by Fisher’s daughter Billie Lourd introducing a tribute video that had audience members drying their eyes). On Friday, Hamill choked up multiple times during his emotional and funny hourlong tribute, and he continued to speak about her at a panel Sunday, where he told a story about the two of them talking their way into a movie theater that was showing the original Star Wars trailer, only to witness it get heckled. 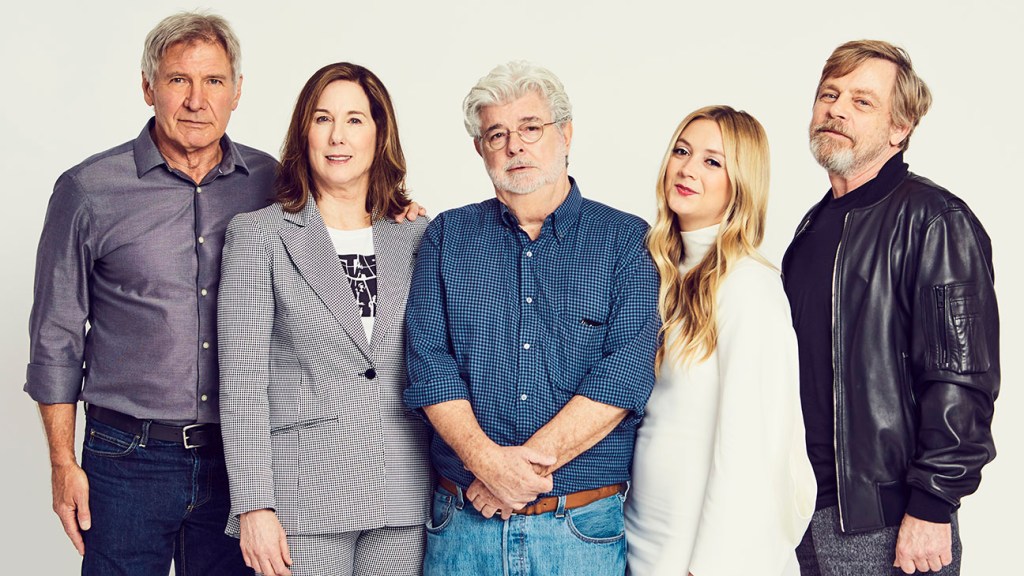 Harrison Ford actually looked very happy to be there

Han Solo himself made a surprise appearance during Thursday’s opening day panel, where he affably joked about his recent piloting woes and later took a touching photo with Hamill and Lourd. The actor has had a complicated relationship with Star Wars and the role that shot him to superstardom, but perhaps saying goodbye to Han for good in The Force Awakens has helped him see the franchise in a happier light.

An intriguing bit of news was revealed about Star Wars Land, the 13-acre park that will open in 2019 at Walt Disney World in Orlando. Park attendees will be able to build up a reputation, so if you crash the Millennium Falcon, that could come back to haunt you later on and affect the experiences you have at other rides.

Meanwhile, the trailer for Star Wars Battlefront II was so strong that it even had non-gamers at the convention buzzing. The panel was packed with details about the secretive project, including the revelation that in multiplayer mode, gamers will get to do battle in environments from the prequel, original and sequel environments — a dramatic improvement from the first Battlefront game. More tantalizing was the announcement that the game will include a single player campaign that fits canonically into the rest of the Star Wars universe. Players also will get to control Luke Skywalker and Kylo Ren in the mysterious era between Return of the Jedi and The Force Awakens, making this game just too intriguing to pass up. The game is in stores in November.