Cassian Andor will have his right-hand droid with him for his Star Wars prequel.

Lucasfilm president Kathleen Kennedy on Thursday confirmed Alan Tudyk will reprise his role as K-2SO in the upcoming Disney+ series starring Diego Luna. The Rogue One prequel sees him once again play rebel spy Cassian Andor and is set during the early days of the Rebellion, prior to the events of 2016’s Rogue One. Stephen Schiff (The Americans) is serving as showrunner.

“It will be a thrilling spy series set in the Star Wars universe,” Kennedy said at an investors day focused on Disney+ in Burbank.

The exec also confirmed that Lucasfilm’s first live-action series, The Mandalorian, will be available as a launch title for Disney+, as will the first two sets of Star Wars trilogies. The streaming service is set to launch Nov. 12, and Mandalorian‘s showrunner Jon Favreau continues to put the finishing touches on the project.

“We’e pretty deep into the heavy lifting of turning all of that wonderful photography and all of those stories into one continuous season of eight episodes,” Favreau said of where he is in the process.

Favreau also brought the first footage of the series. The clip shows the back of presumably the Mandalorian in a snowy area. He’s holding something in his hand, and he pockets it and walks forward. He wears armor that’s meant to look like a medieval knight. There are shots of new planets, new races, new species and new starships, but, as Favreau said, “we want it to feel completely connected and familiar.” 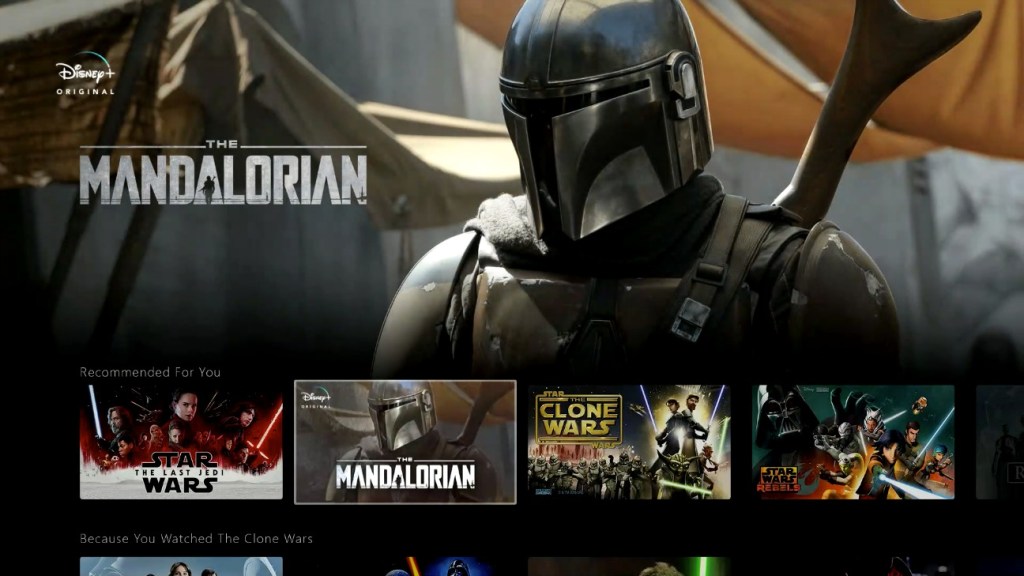 The series takes place after 1983’s The Return of the Jedi and before the villainous First Order rose to replace the Empire. The series stars Pedro Pascal, as well as Gina Carano, Nick Nolte, Giancarlo Esposito and Werner Herzog. The Mandalorian also has booked a number of high-profile directors, including Taika Waititi, Bryce Dallas Howard, Rick Famuyiwa, Deborah Chow and Star Wars: The Clone Saga‘s Dave Filoni.

In addition to those series, Disney revived in July the fan-favorite animated series Star Wars: The Clone Wars for a seventh season on Disney+ after last airing in 2008. Kennedy revealed Thursday there will be a docuseries looking at the craftspeople behind Star Wars.

Star Wars is becoming a key attraction for Disney+ as the studio aims to compete with Netflix and other streaming services. As of now, Disney has no theatrical plans for Star Wars beyond December’s Star Wars: Episode IX. Disney and Lucasfilm have released one Star Wars film a year, but last May’s Solo: A Star Wars Story disappointed commercially and critically, and Disney CEO Bob Iger has indicated there will be a “slowdown” of Star Wars theatrical releases.

The Disney+ investors day comes in the midst of Star Wars Celebration, the annual fan convention being held in Chicago this year. There will be a Star Wars: Episode IX panel on Friday, when the first trailer for the film is expected to drop, while The Mandalorian has its own panel on Sunday.