[This story contains spoilers for Star Wars: The Rise of Skywalker and last week’s episode of The Mandalorian.]

It’s hard to come up with an easy answer to this question, especially considering that Palpatine himself is committed to pulling a Jedi mind trick on both audiences and Kylo Ren alike. “The Dark Side of the Force is a pathway to many abilities some consider to be unnatural” can cover a lot of bases, but is it enough to make being tossed off a deck in your throne room, plummeting hundreds of feet into a reactor core and being blown up in the center of the Second Death Star just a speed bump into your second life?

Surely what we are seeing in The Rise of Skywalker isn’t Palpatine’s original body. He’s decidedly less wrinkled, missing his chimpanzee-eyes, and has some zombified features. Sure, he’s missing a few fingers and is hooked up to some kind of mobile life support unit, but that seems like something that would be more the result of imperfect cloning than the sum loss of the injuries he suffered at the end of Return of the Jedi.

It seems viewers are supposed to just take Palpatine’s explanation at face value, without really thinking about what that might mean or the context of when he first made mention of life-sustaining powers back in Revenge of the Sith. A cursory remembrance on the history of our knowledge of Sith powers would remind us that even Palpatine at one point acknowledged that these powers were limited; in the case of his master Darth Plagueis he noted that it was “ironic. He could save others from death, but not himself.” 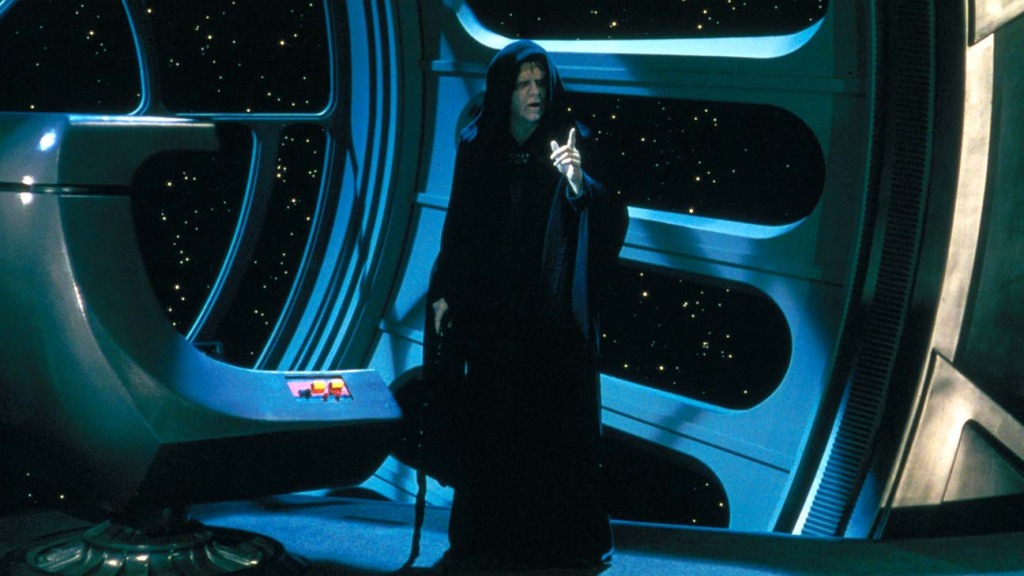 But even that can be worked around by accepting his phrasing loosely. He might not have been able to save himself, but his cultist Sith Eternal on Exegol seem to be innovating in all the right ways for him to benefit. We know that Palpatine wanted to have Rey strike him down so that he might occupy her body, an extension of the classic Sith Rule of Two that has dominated the Star Wars series. So who is to say that he couldn’t occupy another body cloned from his original form or a custom-designed new body?

We see that the Sith Eternal have working cloning facilities on Exegol, or at least can create biological constructs that don’t end up completely deformed. Snoke is the result of those experimentations and was almost fully baked, except for his strange facial deformities that were likely the result of a failed cloning procedure.

But, the question remains, how did the Sith Eternal create a creature like Snoke who — clone after clone — was repeatably Force sensitive and open to puppetry by Palpatine? And, if Palpatine was brought back through a combination of cloning and Sith-related, unnatural abilities, how exactly was that pulled off?

Those answers will come. If there’s one thing to know about modern Star Wars it is that the Lucasfilm story group seems determined to fill in all the gaps, answer every mystery and define every detail in the Star Wars universe, be that through books, comics, television shows or its now-defunct A Star Wars Story” movies.

In this author’s opinion (and that of his writing partner Andy Myers), it appears these answers may already be developing in Disney’s latest phenomenon, The Mandalorian. Already we’ve seen concepts that appeared in The Rise of Skywalker make their debut on The Mandalorian less than 24 hours prior to their appearance on the silver screen. In the seventh episode of the show, “The Reckoning,” viewers witnessed The Child, aka Baby Yoda, use the Force to heal Greef Karga. Then, the very next day, never-seen-before Force healing powers took a central role in The Rise of Skywalker.

This could have been purely a strange coincidence. It could be that that specific television series, with that specific episode, haphazardly lined up a new central concept with the biggest film release of the year, but instinct tells me otherwise. So, if this is true, and Disney is experimenting with merging its Star Wars stories more organically into each other, how does this connect to clones of Snoke and the return of Palpatine?

The answer comes from the first three episodes of The Mandalorian, which set up Baby Yoda as a creature of great interest to a variety of parties, some who want him dead, some who want him alive and others who don’t care one way or the other, so long as they are able to extract what they want from him. The Client and Dr. Pershing wanted to “extract the necessary material and be done with it,” but the man they work for specifically wanted Baby Yoda alive. Meanwhile, a bunch of bounty hunters have been hired specifically to kill the kid.

Eagle-eyed viewers will have noticed that Dr. Pershing, the guy hired to extract whatever material The Client wanted from Baby Yoda, is wearing a uniform with the Kaminoan cloning symbol on it, a reference to the events of Attack of the Clones. Could they be extracting DNA from the Force sensitive Baby Yoda for use in cloning additional Force sensitive bodies, like Snoke? Is Baby Yoda himself a clone of the original Yoda? We’ll have to wait and see.

The oldest mystery in the Star Wars universe is the name of the species that Yoda is a part of. For the longest time it seemed that Yoda was the only creature of his specific species, a sort of uniquely Force sensitive creature. However, in The Phantom Menace, viewers met Yaddle, a female of his species, also a master Force user. You know whose species has also never been identified? Snoke’s.

In the same episode of The Mandalorian that gave us Force healing, the Ugnaught Kuill introduced the concept of a Strand-Cast, a new term for the Star Wars universe. Based on the context of Kuill’s conversation, we can gather that a Strand-Cast isn’t specifically a clone but a new creature specifically created by customized genetic design, as if one could take a variety of strands of DNA and string them together in a new way.

Also in that episode, we discovered that The Client is working for Moff Gideon, a leader in the remnants of the Empire, who specifically wants the creature alive. We don’t yet know his intentions, but it doesn’t seem like such a reach to suggest that all these things might be related. That in a single week of movies and television we learned about Force healing and Strand-Casts, Sith spirit transfer, alongside our previous knowledge that Baby Yoda and cloning are somehow related, appears to be no mistake.

Are Snoke and Palpatine’s various bodies, new and old, Strand-Cast creatures created using Baby Yoda’s Force sensitive DNA with a combination of Kaminoan cloning technologies and unnatural Sith abilities? Only time will tell. But if it is so, Disney and Lucasfilm will have pulled off a clever and likely key strategy for the future integration of their television and film platforms.

The Mandalorian‘s season one finale streams on Disney+ on Friday.