After all, the actor already defied statistical probability by enjoying consistent and considerable success over a four-plus decade career in Hollywood, beginning with his breakout turn in 1974’s The Lords of Flatbush, which also launched the star trajectories of Henry Winkler and Sylvester Stallone.

But beyond that, he’s also the only actor outside of Harrison Ford to have played the Star Wars saga’s roguish mercenary-with-a-heart-of-gold, until Alden Ehrenreich assumed the role for the current prequel film Solo: A Star Wars Story. King memorably gave voice to Solo in a trio of wildly popular and warmly remembered radio adaptations of the three original movies in filmmaker George Lucas’ enduring space saga that aired during the 1980s.

And in keeping with Solo’s usual down-but-not-out fortunes, King actually lost the role to Ford in 1976, only to finally claim it a few years down the line. That’s Sabbac-worthy luck.

Before he was tapped to step into Ford’s space vest for the radio adaptation, King’s association with character began when he had a shot at nabbing the role in the original big screen version of what’s now known as Star Wars: Episode IV: A New Hope.

“I only met George Lucas once, and that’s when I auditioned originally to be on camera in Star Wars,” he recalls of his audition for the filmmaker, who was hot off the success of American Graffiti and testing actors for his next project. “We met over in Paramount somewhere in one of those offices, I walked in and was talking to him — and this was before anyone knew anything about Star Wars, of course. It was just a guy who was directing a film, and I said ‘Okay, tell me about this film. What’s this film about? And he said it’s a film for kids and I remember thinking, ‘Oh shit — let me out of here!’ I was 25 or something. I don’t want to be in a film for kids.”

But King found himself intrigued when Lucas said his project was for kids of all ages, and he read for the role of the roguish space pirate opposite one of Lucas’ Graffiti actors, Charles Martin Smith as Luke Skywalker. Decades later, when asked to approve the release of footage of his audition as part of the extras of a home video release, King says he saw why he wasn’t invited into a galaxy far away.

“I just remember thinking, ‘No wonder I didn’t get the job,” he laughs, remembering being flummoxed by Lucas’ camera setups which were great for editing but confusing for an actor. “I was terrible! Just awful. Good God — I mean, he would’ve had to of been brain dead to hire me.…I didn’t have a clue [about the character] — I was too young, too shallow, just was lost. I was just trying to make the words make sense and imagine I was really in that situation. As good as Harrison Ford was, I was equally bad on this tape.”

Of course, Ford — who’d been reading Solo dialogue opposite auditioning actors as a favor to Lucas and subtly won the filmmaker over — would ultimately land the role and make the smuggler near-instantly iconic when Star Wars later became a box-office sensation. “I realized what a wonderful job Harrison Ford had done,” says King. “He was way better than either Mark or Carrie Fisher were — they were good, but he was extraordinary. He really got that movie, got what Lucas was trying to do.”

But King was surprised to be offered a second opportunity to put his own stamp on the character in 1980 when he was cast in the first radio adaptation of the film. Building on an increasingly successful bid to reinvigorate the radio art form, National Public Radio teamed with the BBC to produce a 13-episode serialized adaptation of the first film, bolstered by a Lucas-approved sweetheart deal that provided rights to the story and the most vital aural elements of the saga — John Williams’ epic score and sound designer Ben Burtt’s library of unforgettable sound effects, including the Wookiee language of Chewbacca and R2-D2-s chorus of beeps — for only $1.

“The word we were given was that George Lucas wanted to do this because he felt badly that only kids with some pocket money could be part of Star Wars, and so he wanted to put it out there in such a way that anybody could access it,” says King.

Brian Daley, a science fiction author who’d penned a trilogy of licensed Han Solo novels, expanded the film’s story with scenes and bits and pieces of canon from Lucas’ exhaustive development materials. Future filmmaker John Madden who would later helm Shakespeare In Love, was brought on to direct, and two of the film’s original cast, Mark Hamill and Anthony Daniels, reprised their roles and Luke Skywalker and C-3P0.

But Ford, in the thick of creating his second career-defining character, Indiana Jones, for producer Lucas and director Steven Spielberg, was shooting Raiders of the Lost Ark and thus unavailable. And that’s when King finally landed in the cockpit of the Millennium Falcon, taking over as the voice of Han Solo — and this time he didn’t even have to audition.

“I don’t know why I got it — I never did know,” says King, who feels that his previous stab at the character couldn’t have done him any favors; he doesn’t believe he only came in second for the film role to Ford. “There was lots of people that were auditioning for that part, and I would assume that I was way down on the list,” he says with a chuckle. “So I don’t think I came close at all. In fact, I doubt if [the radio producers] even realized that I’d auditioned for it. If they had, they probably wouldn’t have asked me to do it!” 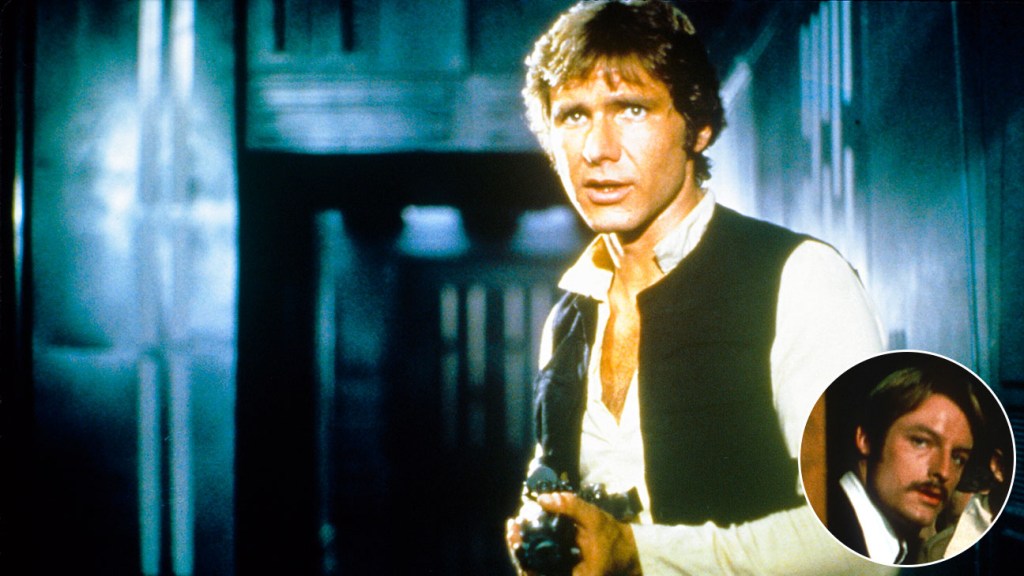 King entered the New York-based production — which also featured famous and soon-to-be-famous voices including Brock Peters, Keene Curtis, Adam Arkin, David Clennon and David Paymer — with a mix of excitement and trepidation. “When I first signed on to do this, I thought, ‘How the hell are you going to do a film that’s done so much on visuals. How do we do it for radio? How can that possibly work?’” he admits. “But it worked beautifully. It was so good — in some ways, it was better than the movie because you had to imagine all this stuff.”

He says he’s not kidding when he calls the production the most fun he’s ever had acting.

He reveled in being liberated from all the practical technical constraints of theater and screen acting.

“All you have to do is learn how to turn pages silently — that’s the only technique: you don’t have to learn the lines; you don’t have to match or hit marks, any of that stuff,” he says. “One of the things you do is you sprinkle the pages with a very light mist of water, and it makes them quiet — and I’m sure today they probably have other techniques like teleprompters or something so you don’t have to deal with that. The rest of it is just the pure joy of pretending this is really happening.”

What he quickly realized he didn’t want to do, after considering it, was to try to replicate Ford’s performance — “his cadences, his vocal mannerisms.” 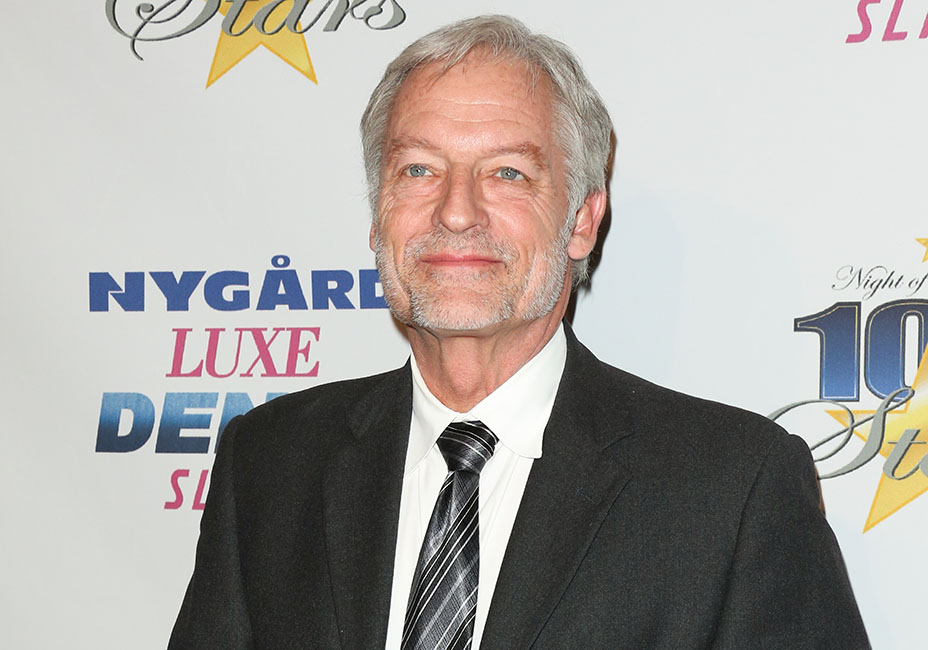 “All I’d do would be a second-rate at best, so I thought better to approach it as if he’d never done the part. Just do it wherever my instincts took me,” he recalls. “He was iconic in that part. You can’t ever imagine Han Solo really without thinking of him, so it was impossible to try and compete with that.”

He was more influenced by Ford’s take on Solo’s cynical attitude, his sometimes paper-thin bravado and his warm friendship with Chewbacca.

“I followed his lead on that, but I didn’t try and make anybody think I was Harrison Ford because I couldn’t,” he says.

The 1981 broadcast would prove highly successful, and King enjoyed the experience so much, he would return in for the 1983 production of The Empire Strikes Back — with the film’s Lando Calrissian actor Billy Dee Williams joining his castmates Hamill and Daniels, plus John Lithgow taking on the role of Yoda. And more than a dozen years later he returned to the role in 1996. Following a gutting of public radio funding, the producers of the other radio dramas produced an audio production of Return of the Jedi with Ed Asner joining the troupe as Jabba the Hutt. The production did not air on the radio, but instead was released for purchase.

In the intervening years, King’s on-screen career flourished. In 1984, his turn in the telepic The Hasty Heart earned him a Golden Globe nomination, the same year that the Stephen J. Cannell-created Riptide, his quirky, fondly remembered detective TV series would launch its three-season run on NBC. Dozens of films, TV movies and series guest shots would follow, along with recurring stints on series including Melrose Place and Spin City, as well as playing the President of the United Stated in the sci-fi blockbuster film The Day After Tomorrow.

King recently returned from the Cannes Film Festival, where he was screening his Western The Divide, which he directed and produced.

“The last five years I’ve completely stopped everything else and I’ve been focusing on this one project,” says King, realizing a long-held ambition to make his own film, which was shot as his own Northern California ranch. “We shot it in real drought, and it is a film about drought,” he says of the story set in 1976, the same year he first auditioned to play Han Solo. “We made an old-time movie, for all those people like me who miss it… It looks like we have a tiny bit of a chance to make a mark.”

He’s rooting hard for Ehrenrich as he takes on the mantle of Han Solo.

“As one actor to another, I can tell you it seems to me he has enormous cojones to do that — I really mean that,” he says. “That takes a lot of guts, because the chances are excellent that he’s going to get beaten up for it, and I’m sure he knew that going in. And that what you got to do: you’ve got to make it your own. You can’t follow in the footsteps of anybody.”

Given that in the Disney-owned era of Star Wars, there’s a new proliferation of material coming from every corner of that galaxy, if an opportunity arose to reprise his stint as a more mature Solo for, say, an animated series like Star Wars Resistance or even an audio adaptation of The Force Awakens, King is more than ready to resurrect his take on the ol’ scoundrel.

“Oh God, yeah. I’d love to do it.” he says. “I have an old voice — that’s just the way it works — so, if they wanted an old Han Solo, then of course. Maybe I’d get lucky. Maybe Harrison Ford wouldn’t want to do it again, and I’d be able to.”