Kelly Marie Tran continues to hold her head up high as the world reacts to her reduced role in Star Wars: The Rise of Skywalker. For someone who’s already suffered a significant amount of social media abuse from a toxic group of ostensible fans, this latest turn of events is all the more troubling since Tran’s omission from The Rise of Skywalker can be viewed as pandering to the ugliest side of Star Wars fandom.

Despite not directly addressing her character Rose Tico’s diminished screen time, Tran does explain how challenging it was to shoot Leia’s scenes with preexisting footage of the late Carrie Fisher. Some of these scenes even required reshoots. Such details align with co-writer Chris Terrio’s account of how some of Tran’s scenes fell on the cutting room floor due to the delicate nature of repurposing unused Leia footage.

“It’s one thing to sit there, look at that footage and try to react to it, but a lot of the big group scenes felt like they were puzzle pieces if that makes sense,” Tran tells The Hollywood Reporter. “I think there were more reshoots on those scenes, specifically, to just try and make sure all of the performances matched up since she [Carrie Fisher] wasn’t physically there.”

Tran also alludes to some cut footage of Rose during the movie’s concluding battle on the planet of Exegol.

“It was insane to be running across this platform — which I know you only see for a second in the movie — but we shot it so many times,” Tran explains. “I remember having bruises on my knees the next day because we kept running, and then we would fall onto our knees and do some more shooting stuff. I don’t think that’s in the movie….”

In a recent conversation with THR, Tran also discusses the feeling on set during Leia’s emotional death scene, her newfound friendship with co-star Naomi Ackie and the significance of The Last Jedi’s Canto Bight sequence.

Well, you and Naomi [Ackie] seem to be having a good time on this press tour.

(Laughs.) We are having the best time. Naomi is the best.

Since you know what it’s like to be the new castmate in a Star Wars movie, did you reach out to her at the beginning of the process?

Yeah, I did! It must’ve been pretty early into the whole process, but we went for a drink in South Bank, London. We sort of talked about everything, and we have since been really, really good friends. It’s been really wonderful to have another woman of color to experience this whole thing with.

Last night [Dec. 18] was the European premiere in London. How are you feeling as things begin to wind down?

I’m doing great! I feel as if I went to Star Wars college. It was something that I was involved in for the past four years, and it was a wonderful experience. I’ve learned a lot, and now I’m graduating. It’s crazy. We’re all graduating. So, that’s kind of how I’m viewing it. 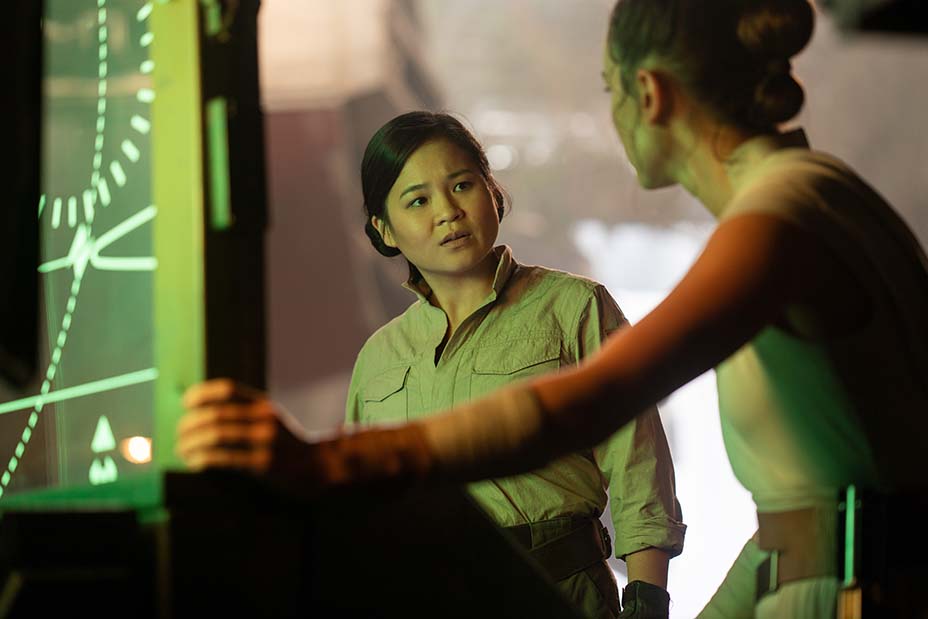 A year has passed since the events of The Last Jedi, and Rose has climbed the Resistance’s chain of command. Did you create backstory during that missing time period so you could incorporate Rose’s added experience into your performance?

I definitely did. I also did that for moments in The Last Jedi where I felt that there were things I wanted to have in my arsenal — both as an actor and in terms of knowledge of my character. But, last time, during Jedi, I had all this backstory, and I later read one of the novels that was based on my character. So I quickly realized I was completely wrong. So, the answer is yes: I do have a lot of backstory that I made up in between, but I’m pretty sure it’s not canon. (Laughs.)

I’ve heard actors say that the camera can pick up their thoughts. Is that something you’ve noticed at this point, too?

Does J.J. give much performance direction, or does he trust his actors’ judgement for the most part?

I don’t want to speak for every actor; I can only speak to the relationship I have with him personally. I do think it’s a little bit of both. It’s definitely a collaborative process, which I think is the best way to work.

The big Leia moment after she contacts Ben was just crushing. What was that day on set like?

Yeah… (Tran sighs.) I think it was really emotional for everyone. There’s definitely a sort of reverence that comes with knowing you’re in a scene like that. I don’t know how else to convey the feeling that I had on set that day, which is a feeling of wanting to make sure we did justice to that moment and to Leia.

When a heavy scene is on the schedule, a number of actors have told me that there tends to be a lighter feeling on set as a subconscious response to what’s happening that day. Was that also the case here?

I remember us still being normal humans and kind of joking around about little things. But we were always still remembering what we were doing. I think that day, for me, was very, very specific, and I won’t forget the feeling of being aware of what we were doing. I think we all knew how many people loved this character and what this moment meant to them. So, we just wanted to honor and respect Leia, but also Carrie. 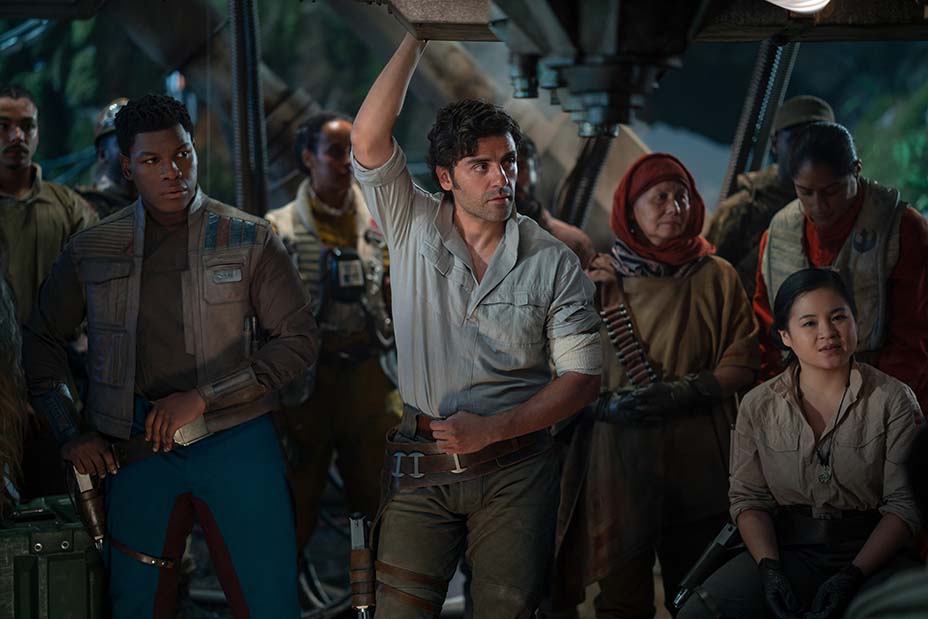 Compared to most scenes, were the Leia scenes given a lot more time and attention given the circumstances?

Yeah, the one thing that was difficult was that you were acting with footage that was prerecorded. So, instead of having an actor there and reacting off the actor, you would sometimes look — in between takes — at how the actor delivered a line and then try to imagine and react to that. So, it definitely took more time and was a very different experience for me. We probably did a lot more takes for scenes with her than without her.

It’s one thing to sit there, look at that footage and try to react to it, but a lot of the big group scenes felt like they were puzzle pieces if that makes sense. We were trying to use specific moments that they already had, so it definitely took more time. I think there were more reshoots on those scenes, specifically, to just try and make sure all of the performances matched up since she wasn’t physically there.

Rose gives Snap a bit of a hard time for his lack of optimism. Where was her head at during that moment?

(Laughs.) As she did in The Last Jedi, she always had this vision of hope and faith in a cause, while also knowing what they were up against. Seeing that the Resistance is in this dire place, I think she maintains that in that moment.

When you’re shooting those big Resistance pep talks, do they ever get you genuinely pumped up?

(Laughs.) Honestly, those big Resistance scenes where everyone has one line are really hard. I think we shot that scene so many times because we couldn’t figure out the puzzle pieces of what Leia was going to say and what everyone else was going to say to fit around it. I think there is an air of feeling like you’re pumped up, but we’re really just spending most of the time trying to get it right.

Was the Battle of Exegol the most organized chaos you’ve experienced on a set?

Yeah, it was probably one of the biggest sets I had ever been on. It was incredible to see what the stunt teams did. It was also insane to be running across this platform — which I know you only see for a second in the movie — but we shot it so many times. I remember having bruises on my knees the next day because we kept running and then we would fall onto our knees and do some more shooting stuff. I don’t think that’s in the movie. It was definitely organized chaos as stormtroopers were flying, people were on horses…. It was pretty insane.

Chewie had the honor of hugging Rose as everyone was celebrating back at the base. I assume that wasn’t your last day of shooting?

Is it even possible to get sick of hugging Chewie?

What was going through your head on your actual last day?

I remember feeling very happy and sad if that makes sense. It was sort of this in-between emotion of being grateful to be a part of this thing that’s much bigger than me and also feeling sad that it’s over. So, there were a lot of emotions that day.

Out of curiosity, were you ever gifted Rose’s crescent moon necklace?

Rose’s quote, “That’s how we’re gonna win. Not fighting what we hate. Saving what we love,” has transcended The Last Jedi since it’s quite relevant to our own world. I’ve also come across it a few times in contexts that are unrelated to Star Wars. Has it made its way to you in unexpected places or moments?

Yeah, it definitely has. I don’t want to get too political, but at the Women’s March, I saw people holding posters of that quote with photos. So, it was pretty special.

I get very defensive over Canto Bight because its subtext is essential to this story and these characters. While exploring a revolting and rarely seen side of the war, Rose got the chance to become a hero like her sister, Paige, and she even opened Finn’s eyes to the point where he finally stopped running and became a Resistance fighter. Was the subtext of Canto Bight just as impactful for you?

Yes, absolutely. For me, that whole moment of really seeing the people who are profiting off of other people’s suffering and oppression is really relevant in the world today. Like you said, it hadn’t really been addressed, and I think it’s a really beautiful moment. Rian Johnson is a genius.