Disney and Lucasflim are pulling back the curtain on Star Wars Land, the 14-acre attraction that will open in 2019 at Walt Disney World in Orlando.

During Saturday’s Star Wars Celebration panel celebrating the past and future of Lucasfilm attractions, the audience was treated to a behind-the-scenes video that showed off the cockpit of the Millennium Falcon and revealing how park patrons will each have different jobs as they crew the ship for the ride.

One of the more intriguing revelations from the panel was that guests can “build a reputation” at Star Wars Land. What you do on one ride could affect what happens on others. For instance, If you bring back Han Solo’s ship from an asteroid run heavily damaged, someone might not be happy with you later in the day.

There will be a presence of the First Order and the Resistance just walking around the streets, while guests will be able to buy blue milk and meat grilled on a podracer engine. The panel showed off a stunt workshop clip, which included a female stunt performer with a staff weapon tussling with bad guys just like Rey (Daisy Ridley) did in The Force Awakens.

Lucasfilm also revealed it will be unveiling a new technology that will allow for more realistic looking lightsabers than ever, and they showed off aerial footage of life size AT-ATs under construction.

Designer Doug Chiang told the audience he was approaching designing Star Wars Land just like he would a film. The team wanted it to look like late Star Wars concept artist Ralph McQuarrie had designed Star Wars Land. Istanbul and Morocco were also inspirations, and the team actually went there to study the locales. But unlike a film, they had to think about how this set will look at all times of day and in all kinds of weather.

The panel disclosed that a planet scene in the Last Jedi trailer (below) is a mineral planet called Crait. It will be the new addition to the Star Tours: The Adventures Continue attraction at Disney’s Hollywood Studios. 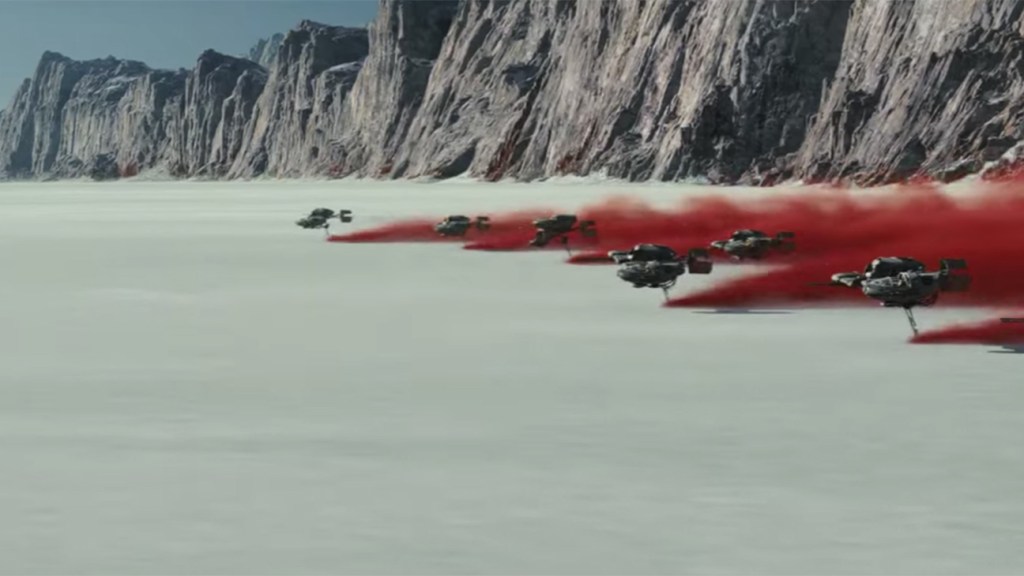