The best and worst scenes in Star Wars: The Last Jedi all address viewers’ expectations. That’s not surprising, given that 2015’s The Force Awakens, the previous entry in the still ongoing new trilogy, also concerns legacy and the recurrence of pop culture tropes. As in The Force Awakens, new characters like Rey (Daisy Ridley), Kylo Ren (Adam Driver), Poe Dameron (Oscar Isaac) and Finn (John Boyega), strain to either fit into, or wriggle out of roles that they inherited in The Force Awakens. Legacy is, in this context, like an ill-fitting suit or dress, one that bunches up around the arm pits and leaves the wearer feeling bloated, chafe-y or otherwise uncomfortable. So it’s not surprising that there are a handful of The Last Jedi scenes that echo key moments from 1980’s The Empire Strikes Back, the second (and rightfully best-regarded) entry in the original trilogy. There are ostentatious callbacks to moments like the Battle of Hoth, Darth Vader’s (James Earl Jones) “Come to daddy” proposal and Luke Skywalker’s (Mark Hamill) trippy vision quest. There are also creatures and events that recall characters and settings from A New Hope and Return of the Jedi, like the Ewok-like Porgs and the Mos-Eisley-Cantina-meets-Jabba’s-playhouse-style casino (complete with visiting pleasure barges!).

The Last Jedi writer/director Rian Johnson does not shy away from viewers’ stacked expectation that his new film will be like The Empire Strikes Back in the sense that it’s the “dark, middle entry,” the one where characters’ allegiances and commitments are tested. It’s an almost impossible act to follow, but Johnson nails a lot of the key emotional scenes of the film. One reason why is that many of the key character-driven scenes are not action-intensive (though there are several strong big set pieces). Rey’s character arc is especially strong because Johnson suggests Kylo Ren is her equal. She is not like Luke, in other words, though her story echoes his in that she also goes off-planet, trains with a Jedi master on a remote world and then attempts to confront the Darth Vader in her life. The main complication to that formula is Kylo Ren, who is essentially being forced to make the same decision that Darth Vader, his role model, did at the end of Return of the Jedi, making him more of a potential fairweather antihero than a big, bad antagonist. 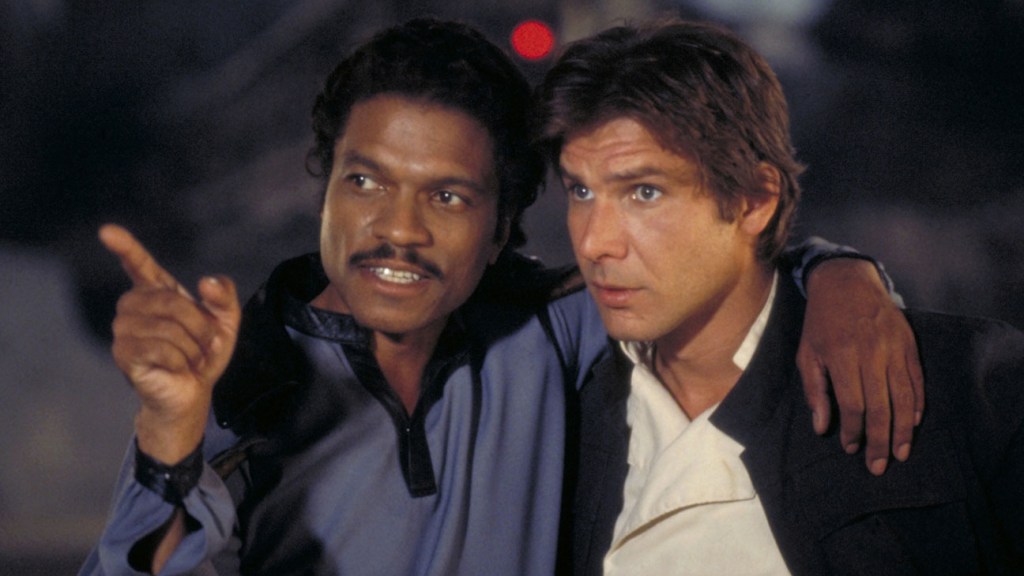 That said: there are several competing sub-plots that vie for viewers’ attention, and sometimes, those sub-plots feel like they feature three or four supporting characters too many (e.g.: did Captain Phasma really need to come back?). In this context, it’s frustrating to see that Kylo Ren is treated as a foil for Rey. That’s a role that better suits Luke since the context by which we understand his actions has already been established in the original trilogy. We know most of Luke’s story, so any new details don’t require a great amount of set-up or development. 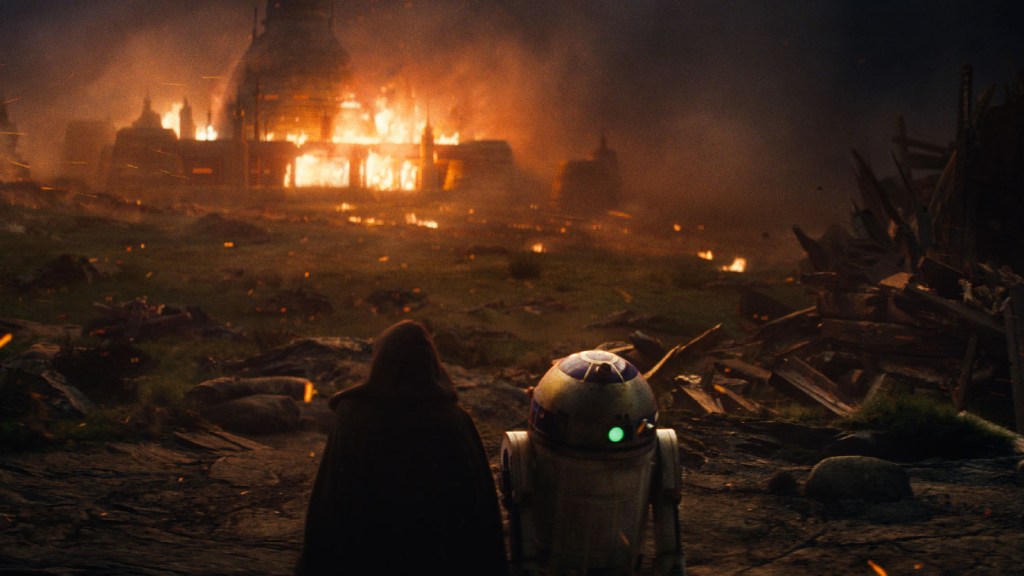 Kylo Ren, on the other hand, is supposed to be Rey’s mirror image, but we don’t really know much about what’s going on with him, no matter how many times she says something like “I know what you’re feeling.” We know that they are temperamentally opposed to each other: in the beginning of The Last Jedi, he abandons the Vader-like mask that he hid behind throughout The Force Awakens. By contrast, she falls head-first into a Georgia O’Keefe-style memory hole where she confronts, uh, herself in a Zardoz-like hall of mirrors. And granted, Kylo Ren’s inner struggle is, by necessity, marginalized since he is, for a while, treated like the series’s main villain. So one could argue that viewers shouldn’t be able to read his emotions beyond a point. But, other than an establishing conversation between Kylo Ren and Snoke (Andy Serkis), there’s nothing that suggests that he is close to Rey’s equal beyond that amazing scene where they psychically graze each other’s palms. It’s a rich, emotionally resonant moment, one of the strongest in any of the Star Wars films.

Still, Johnson doesn’t deliver on the promise of that scene because Kylo Ren just isn’t as interesting a character in The Last Jedi as he is in The Force Awakens. He’s used strategically, like any good mirror-like supporting character should be. But other main characters’ foils, like Luke for Rey and Rose Tico (Kelly Marie Tran) for Finn, have stronger ties to their anchor protagonists because their bonds are comparatively unburdened by self-referential callbacks and will-they/won’t-they tension. Rey and Kylo Ren’s connection isn’t as engaging because it’s basically a rehash of the Vader/Luke story, except this time the Vader analogue gets to avoid the mistakes that his predecessor did, and learns from killing Han Solo, whose death in The Force Awakens establishes him as Kylo Ren’s Obi-Wan Kenobi-like prodigal mentor.

Kylo Ren and Rey’s shared story is also frustrating because there’s a not-so-subtle Luke/Leia vibe to it that’s teased throughout the film. Note the way that Kylo Ren only reminds viewers that she is not directly related to any of the original trilogy’s characters after two crucial scenes call into question her parents’ identity: the hall of mirror sequence and the bit where they have a psychic pow-wow, and he’s only wearing a pair of leather pants that look weirdly like Willem Dafoe’s Streets of Fire get-up. Both of these scenes are, out of context, pretty strong: the hall of mirrors is a really solid piece of moment-to-moment story-telling, while the “Can you please put some clothes on” line earns a big laugh.

But context matters here because so much of The Last Jedi feels like a self-conscious attempt at distinguishing this new Star Wars trilogy from all the other live-action Star Wars films we’ve already seen. Playing to viewers’ expectations this much is a bit of a no-win proposition, something that the makers of 2013’s Star Trek: Into Darkness learned when outraged nerds dumped all over their film’s superficial, on-the-nose callbacks to Star Trek II: Wrath of Khan. Kylo Ren’s story is only disappointing in the sense that he’s supposed to be different than his predecessors: not a lover, not a brother, not a nemesis — but a potential partner. He represents the road not taken, as we see in flashbacks where Luke remembers the night he pre-emptively considered killing Kylo Ren in his sleep. He’s also the personification of fans’ unrealistic expectations, or maybe just the personification of the film’s conflicted relationship with fans’ entrenched nostalgia and legacy. Driver deserved a better role than the one he got to work with, one that firmly establishes that he’s not just useful as a means of defying viewers’ expectations.

Ultimately, our understanding of too many characters’ actions depends on twists and reversals of fortune, like the red herring nature of Justin Theroux’s code-breaker character, the inevitable Lando-like double bluff/betrayal that defines Theroux’s antihero replacement DJ (Benicio del Toro), or the expectations-absolving final sacrifice that Laura Dern’s impenetrable Vice Admiral Holdo makes at film’s end. A lot of these relationships are dependent on the assumption that everything we see in the film — every assumption, and character-defining action up until a certain point — is not as important as the moment where they reveal their true selves. That “gotcha” style of drama eventually becomes exhausting, no matter how clever Johnson’s film may be from scene to scene. The Last Jedi is a strong film, but it feels even more burdened by questions of legitimacy and inheritance than even The Force Awakens. One can only hope that Johnson’s new trilogy of films comes sooner rather than later. He deserves a blank slate — and a new set of toys —to show off his considerable talents.

The Most Satisfying Twist in 'The Last Jedi'