Last week, Star Wars: The Last Jedi came to audiences of all kinds and left those first viewers with a story to remember. How to remember it, however, is a serious point of contention, as those earliest viewers largely consisted of two audiences: critics, many of whom praised it, and obsessive Star Wars fans, many of whom hated it. Perhaps it’s proper that the film’s own legacy is already becoming muddled, as that fits with the film’s intriguing themes — and for some viewers, its greatest problems.

I am one of those obsessive Star Wars fans. But I’m not here to hate — Yoda taught me better, anyway. I’m not the one rallying audience reviews on Rotten Tomatoes to suggest Episode VIII is worse than any of the prequels, and I’m definitely not the one actually starting petitions to have it removed from the Star Wars canon. In fact, I have been riding a train of thought from “I enjoyed it with its flaws” to “I wish they hadn’t made it at all” and back again. I think I’ve settled on the former, but first I need to get some nerdy concerns off my chest.

It’s not that I was obsessing over theories that didn’t pan out, or that the casino scenes were too goofy, or that Leia’s (Carrie Fisher) superman flight was silly (although, sure it was).

It’s that for a certain kind of fan, the greatest joy of Star Wars is that these stories feel like they’re truly reverberating throughout a galaxy far, far away, with its own history and legends and secrets. And The Last Jedi felt like it was telling us that didn’t matter.

Luke (Mark Hamill) was the original window into this world for young viewers. There are three key things I learned as a little kid in the opening minutes of the first film: that we are coming in partway through a long story, that a whole galaxy is at war, and that somewhere a young farm boy is doing chores while wishing for adventure and purpose. Luke started out as a conduit by which we could explore — the young man to whom Obi-Wan (Alec Guinness) remarks, “You’ve taken your first step into a larger world.” And feeling like that we are stepping into a world that is much larger than anything that could be shown on screen is what pulled me in as a kid, and still does today. 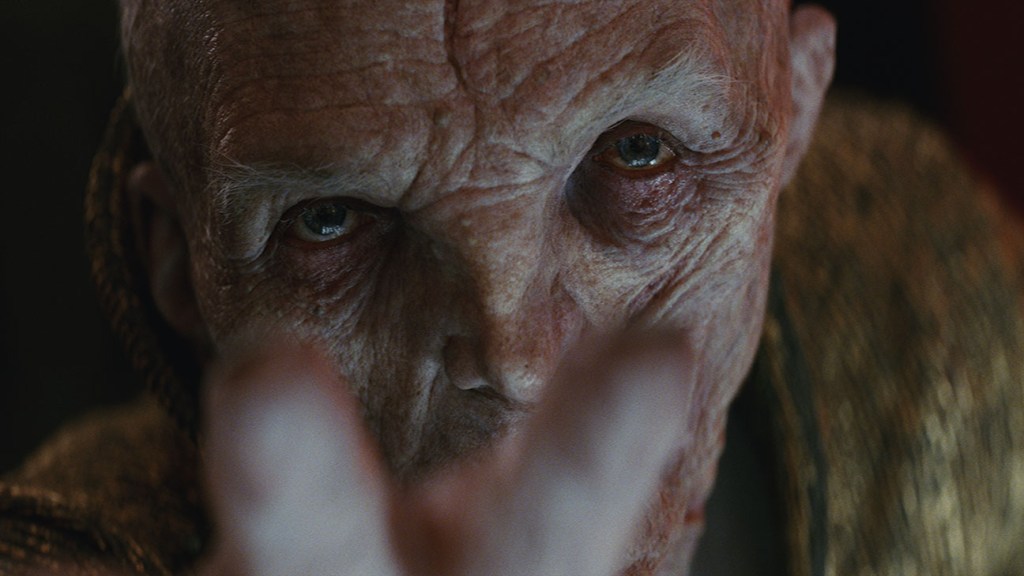 We didn’t need to know what it meant that Han Solo (Harrison Ford) had completed the Kessel Run in “less than 12 parsecs,” but we needed to believe Han and Chewie (Peter Mayhew) had fascinating stories that were important to them. We needed to hear languages we didn’t understand. We needed to hear about old wars. We needed to see the determined faces of every X-Wing pilot and believe they had their own stakes in a daring assault. And more than anything, we needed to believe “hokey religions and ancient weapons,” as Han put it, were critical puzzle pieces in a grand tableau full of lore, legends and history. We needed to feel like we were taking steps into a larger world.

The Last Jedi starts with a bang, and that bang is the starting gun for a 2.5-hour race to escape the First Order, creating action and drama aplenty in that beloved world. And that’s a great part of what every fan comes to see, but it’s not everything. Throughout that race, the story hits on a recurring theme of legacy: the history of the Jedi, the teachers of Ben/Kylo (Adam Driver), the parentage of Rey (Daisy Ridley). This is great too for a story that spans generations in both its fiction and the telling. But the resolution to that theme in this film is repeatedly jarring, and disheartening, because it feels like a rejection of the great stories and mysteries out there in the Star Wars universe:

Why did Luke seek out the original Jedi temple? Because he wanted to isolate himself there and end the Jedi Order.

What did he find there? Ancient knowledge, sure, but we don’t learn what, and we shouldn’t expect it to help anyone anyway — Yoda (Frank Oz) himself seems to reinforce Luke’s decision to burn them.

Who is this powerful Snoke (Andy Serkis), who is responsible for the whole struggle with the First Order? We don’t find out, and now it seems like it’s not supposed to matter.

What remains throughout the galaxy of decades of the Rebellion, the Republic and the Resistance that Leia can call upon in her darkest hour? None, save Luke alone — and then only by long-distance call.

The idea, perhaps, is that everyone must shed the past and take the reins of their own destiny. When it comes to the revelation about Rey’s parents, this works. Bloodlines don’t really seem like they should determine who the heroes can be in a modern epic. But the character most articulately championing this theme — that our legacies are to be discarded — is Kylo Ren, for whom it has justified wholesale slaughter and patricide. “Let the past die. Kill it, if you have to,” he says.

Perhaps the repetition of this theme creates a sinking feeling for longtime fans because we worry that writer-director Rian Johnson — and perhaps Disney, as it reshapes canon — is saying the same thing about the history and lore of the Star Wars universe. What has been written in these pages needs to be burned so we can start over. It doesn’t matter what the Jedi believed, or what Sith plots Snoke contrived, if Johnson can surprise the audience by blowing it all up. 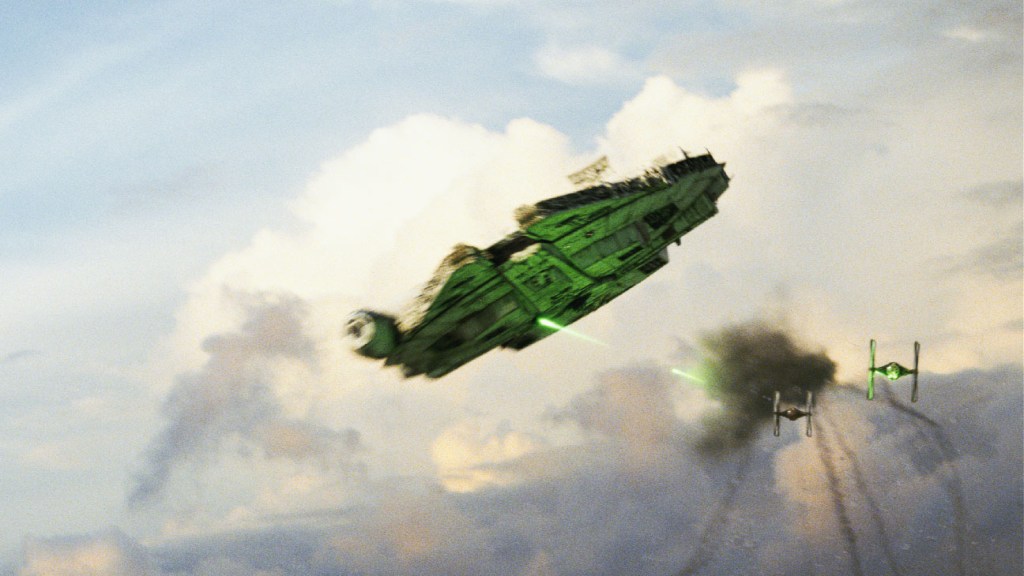 It’s not that we fans don’t like being kept on our toes. It’s that we’re more interested in the slow unveiling of the mysteries of the galaxy. We want to learn new legends, even if Luke rejects those now that he is one. But Johnson seems to want to ensure everything that we care about in this galaxy fits inside the Millennium Falcon by the time the film is over.

While this has worried me, I must ultimately admit The Last Jedi in many ways continues the work of The Force Awakens to revive that galaxy and tell exciting new stories in it. We concerned fans might feel like it has made the outlook for the saga as bleak as the outlook for the Resistance when this film ends, but we must, as sci-fi geeks often do, look more closely.

Not everyone initially caught a glimpse of the Jedi texts in Rey’s drawer at the end of the film. I certainly didn’t. But they were there. And that glimpse shifts the story’s undercurrents. As the Jedi library burned, Yoda said it contained “nothing that the girl Rey does not already possess.” This was frustrating at first— that Yoda, the ultimate gatekeeper of the secrets and knowledge of the world of Star Wars, would ever suggest a young person who grew up in the middle of a desert (like certain Skywalkers) knows everything they need to about the nature of things. But I should have known, based on his history of deceiving Luke, that Yoda was up to something else. He was helping Rey save the lessons of the Jedi’s history, and then helping Luke remember why those lessons were important in the first place. He gave wisdom to a fiery Rey and reminded a wizened Luke of his heart, and that allowed them to collectively save the day.

Johnson himself has said the conversations fans are having are productive for the franchise as a whole.

“The goal is never to divide or make people upset, but I do think the conversations that are happening were going to have to happen at some point if sw is going to grow, move forward and stay vital,” Johnson tweeted Thursday, in reply to a Twitter user who asked if he thought it was good the film had polarized fans.

The Last Jedi, if entertaining for many, was difficult to weather for some fans. It was a flood of sorts, washing over many things we love about Star Wars. Nonetheless, passed from Yoda, to Luke, to Rey, the legacy of Star Wars is alive and well above the tide, onboard the Millennium Falcon.

You’ve never heard of the Millennium Falcon? It’s the ship that made the Kessel Run in less than 12 parsecs.