[Warning: this story contains spoilers for Star Wars: The Last Jedi. Do not read unless you have seen the film.]

There’s a moment during a critical battle sequence in Star Wars: The Last Jedi where the bridge of the command ship is blasted apart.

Princess Leia is physically sucked out into the vacuum of space. I watched that happen and found myself stunned, confused and hurt.

She couldn’t be gone like that. That wasn’t supposed to happen. My mind grasped for some sort of answer; I’d heard she was in a coma during part of the movie. I knew there were shots from the trailer featuring Leia we hadn’t yet seen. I didn’t understand.

Even as the scene shifted and we discovered Leia frozen in space and time, I railed against it. Trying to make sense of a Star Wars universe that would do this to our beloved princess. Why wasn’t anyone helping? What the hell was someone supposed to do anyway?

Then her hand moved.

The entire theater gasped, and as General Leia Organa reached out her hand and embraced the Force we all knew she had but had never seen her actually use. Cheers broke out.

Of course. Leia couldn’t die like that. The self-rescuing princess we all know and love couldn’t suddenly be dead in an instant with her work unfinished. Of course, she wasn’t dead.

That was the moment I burst into tears.

Well, one of them anyway. I cried multiple times in both joy and sadness (I’m a soft touch), but that moment was something else because it was the moment I realized that writer-director Rian Johnson had captured the emotions so many Star Wars fans went through when we lost Carrie Fisher in December 2016.

After suffering a heart attack on a flight from London to Los Angeles, she held on for four days in the hospital, her family by her side. For Star Wars fans, it felt like time stopped. We all waited. Hoping.

Willing her to wake up. To not be dead. Like so many people in the theater watching events play out in that galaxy far, far away.

We couldn’t will her back to life, much as we all tried. Carrie Fisher passed away and the Star Wars fandom mourned its beloved Princess, buoyed by weeks earlier getting an unexpected appearance of the young Leia we all fell in love with at the end of Rogue One: A Star Wars Story — and the one word she left us with. 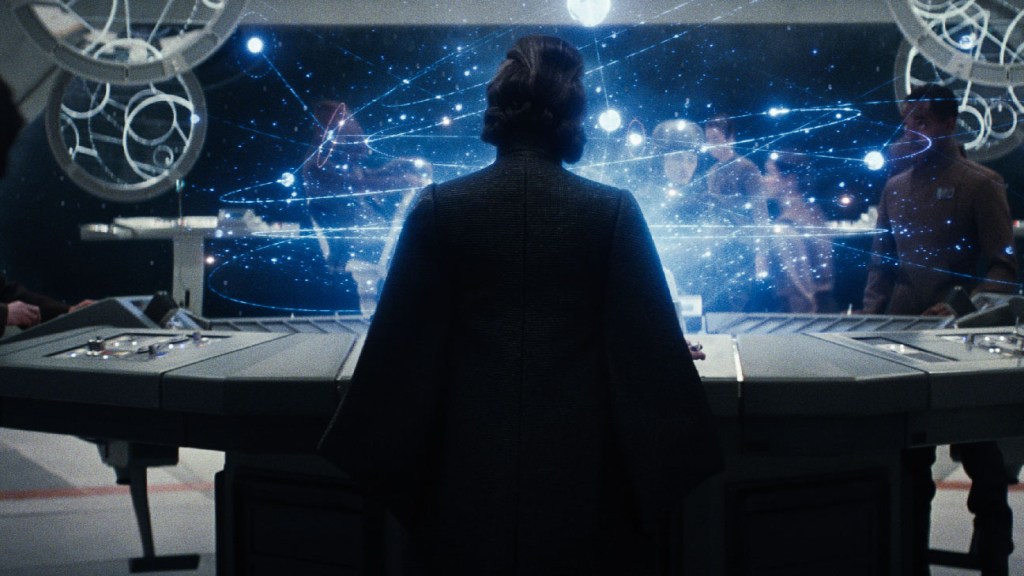 Whether it was intentional or not, like Rogue One, Star Wars: The Last Jedi was built on hope, and while the story revolves around a number of characters — Rey (Daisy Ridley), Kylo Ren (Adam Driver), Luke (Mark Hamill), Finn (John Boyega), Poe (Oscar Isaac), even Admiral Holdo (Laura Dern), Leia is the center of that galaxy. She’s the gravity pulling that universe together and she’s the one who never wavers.

Leia Organa has always known what to do. Unlike Han (Harrison Ford) or Luke (Mark Hamill), she’s never run away. She’s never turned from the light or lost sight of the bigger picture. She never knew her birth parents, but she doesn’t need to know who they were to know who she is.

Watching Leia Organa use the Force to save her own life is the epitome of who she is and whatever happens now, whatever story needs to be told to explain her not being part of J.J. Abrams’ Episode IX, we know Leia lives on.

Leia thinks Luke is the spark that will light the flame that will bring the First Order down, but Leia has always been the heart of the story and — like Luke Skywalker — she saved the Resistance by sheer will and commitment.

She is one with the Force.

Writer Shana O’Neil is a lifelong Carrie Fisher fan and a contributor to StarWars.com, among other places.

The Most Satisfying Twist in 'The Last Jedi'