A decade before Disney handed them the keys to Lucasfilm’s Star Wars galaxy, The Last Jedi director Rian Johnson and Ram Bergman met when the Israeli producer got hold of a script for Brick, a teen noir Johnson had been trying to make for seven years. Bergman, now 47, still recalls how smoothly Johnson, 44, handled the first day on the 2005 film, which shot largely at San Clemente (California) High School, the helmer’s alma mater.

“I said, ‘Well, I don’t really need to be here.’ This guy knows what he wants,” the producer says with a laugh. “The world is discovering what I always knew.” Brick, made for just $330,000 raised from family and friends, grossed nearly $4 million. Johnson and Bergman followed it up with increasingly ambitious but modest (by Star Wars standards) projects The Brothers Bloom (2008) and Looper (2012), Bruce Willis’ time-travel thriller that, with $177 million worldwide, was their biggest film — until now.

As their scope has grown, their relationship “hasn’t changed much,” says Bergman, “except the longer we spend together, clearly we trust each other [more].” Says Johnson, “I wish I had the savvy when we first met to say, ‘Oh, my God, this guy is something special.’ I just liked him.”

Jedi brought the pair a unique challenge with the death of Carrie Fisher in December 2016. Early in the new year, they reviewed footage with Lucasfilm and decided against changing her “beautiful, complete performance that audiences deserve to see,” says Johnson. He was loath to “manufacture something, I don’t even know what it would have been,” to ease the transition to J.J. Abrams’ Episode IX. “J.J. is going to figure out a way to bring it home that is satisfying.” Now conjuring a new Star Wars trilogy, the duo isn’t yet unconcerned about its place in the franchise timeline. “I’m thinking of, what’s the story going to be, who is it going to follow?” Johnson says. “I’m excited by the potential.”

What have you learned on The Last Jedi that will help you going forward with the new trilogy?

Rian Johnson: There were so many things that were new to me, in terms of process with this. Everything from working with pre-vis for the first time to working with the heads of departments. It was a smooth process. It felt oddly comfortable, but a lot of it was new, so there was a learning curve. It will be nice coming into the next one, knowing a little bit better how a machine this big works. It was such an unknown to me, whether the size of this and the scope of it would make it a different thing than I previously knew how to do. Now that I know that’s not the case, I feel like I can come into it a little bit more without the trepidation of, “Am I going to know how to do this?” Which feels good.

Are you going to to take any time off once the launch of this movie is out of the way, or do you know when you’re going to hunker down and focus on this full time?

Johnson: We’re going to figure out the timing of the next one. We haven’t figured it out yet. I’ll say, I don’t feel like, “Oh my God, I’m exhausted, I need to sit on a beach for a month.” I feel creatively energized right now. I feel like I want to jump right into work. This whole process has left me feeling ready to jump in and do it again right away. I don’t know why. I don’t know if that’s a good sign.

Ram Bergman: Also, on most of big movies, you work and you deliver the movie literally last minute. We pretty much finished the movie in early August, so we’ve not been working really hard, except doing press here and there. We had the luxury of delivering the movie a few months earlier than usual.

Have you given thought to where in the Star Wars timeline this trilogy will fit? For instance, would it takes place before the Skywalker Saga or after?

Johnson: I’m at the very beginning of trying to come up with it, and honestly, timeline-wise, I’m not sure yet. In a way it’s interesting, but in a way it’s the least interesting part of it to me. I’m more thinking of what’s the story going to be, who is it going to follow? What elements is it going to have? What kind of drama is in it? My head right now is more in that place. I haven’t really, really gotten into it. Right now I’m mostly excited by the potential and just starting to form little clusters of ideas of what it might become. 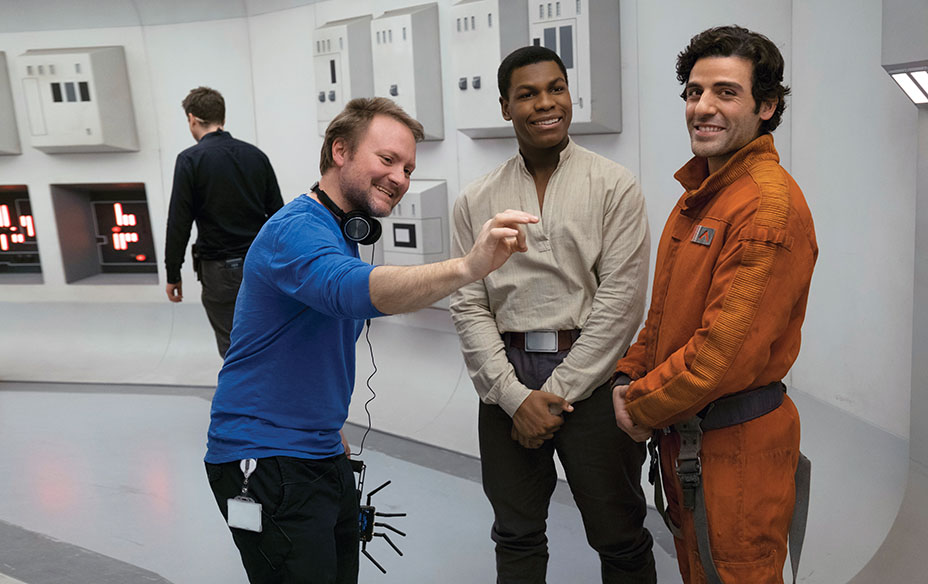 Mark Hamill delivers perhaps his best performance as Luke Skywalker. Did you all have a push and pull, in terms of figuring out where his character would go?

Johnson: Absolutely, Mark’s had nearly 30 years now to think in his head what the return of Luke Skywalker would be. First of all, there’s no way what I came up with was going to exactly line up with what you expected, but I think what I came up with is one of the things he least expected, which is kind of this Fisher King-type character, someone who had taken himself out of the fight and genuinely believed that the world was better off without what he has to offer. For me, it was the process of talking to Mark about why the character was the way he was, the process of talking him through it and arguing about it and butting heads and then coming together about it. It was a really good process. It was something that a) made me dig into it more myself through having to justify to Mark, to really understand it on a deeper level myself of why it was going to be that way; and b) it just brought us closer. I think especially because I grew up with Luke as my hero, and he meant so much to me, I was a little bit intimidated by Mark. Being thrown into the deep end of the pool in terms of a working relationship with him was great, because when we got on set, we had a shorthand, we had an intimacy. We felt very comfortable together in a way that only going through something like that can buy you. I think he gives a beautiful performance. I’m really excited for folks to see it. He’s so good in the movie.

The Movie to Which 'Last Jedi' Owes a Debt of Gratitude

Carrie Fisher delivers an amazing performance here. What was it like finishing the movie following her death? Did you ever consider changing the film?

Johnson: That was the very first conversation I had with [Lucasfilm head Kathleen Kennedy] after we came back, after New Year’s. I kind of looked through the footage. That was the very first question. I felt really strongly that what we have here is so beautiful and the way that the character develops, the way it’s paid off, and not only that, the horror of trying to manufacture something that — I don’t even know what it would have been, but something for the end of this movie that leaves it in a place where the transition is easier, the idea of, “Oh God, how would you fake something like that, and how would it not be terrible?” Given that we have a beautiful, complete performance from her that I think audiences deserve to see, and I think it will mean a lot for them, that ray of hope from Leia. For all of those reasons I felt really strongly that we had to let this fly. Luckily we have a fantastic storyteller in J.J. Abrams who is going to figure out a way to bring it home in the end, that’s going to be satisfying, I know he’s going to. With this movie I just wanted audiences to have this performance.

Kelly Marie Tran’s Rose has quickly become a breakout character. What was it about her that made you know she was the right person for this role?

Bergman: It was Rian. Rian was the one. We saw hundreds and hundreds of girls. He said, “I really like this girl.” He stuck with it through every stage, no matter where we were in the process. It always came back to Kelly. It paid off in a big way. It was great to see so much love for her and to see the movie with the audience, how people responded and how they were invested with her. That was the best feeling in the world.

Ram, how has your role evolved as a support system for Rian over the years as he’s grown as a filmmaker?

Bergman: It hasn’t changed much, except the longer we spend together, clearly we trust each other and we are there for each other for anything, and we only want the best for each other, and we want the best for the movie we are making. The process of making the movies is more or less the same, no matter the scope of the movie. You wake up in the morning and you are very happy going to work, making a Rian Johnson movie.