The great mystery of Star Wars: The Force Awakens could be boiled down to one question: who are Rey’s parents? The scavenger from Jakku seemed to come from unremarkable stock, but her way with the Force was almost unprecedented. And that film’s co-writer and director, J.J. Abrams, does love his fabled mystery box. So when viewers learned that Rey believed she was waiting for her parents’ return, it seemed logical that she (and we) might one day learn her heritage had a twist or turn. The Last Jedi has the answer, if we take it at face value.

(Repeated warning: spoilers ahoy.) Rey spends a good chunk of writer/director Rian Johnson’s The Last Jedi in training with the reluctant Luke Skywalker (Mark Hamill), but she’s even more driven to know who her mother and father are. While in training, Rey is stunned to learn that she and the conflicted Kylo Ren (Adam Driver) are able to communicate with each other across the galaxy. Kylo taunts Rey with the fact that he can see who her parents are. At a key moment, as Kylo tries to get Rey to turn to the Dark Side, he unveils the truth: Rey’s parents were “nobodies.”

Rey isn’t Han (Harrison Ford) and Leia’s (Carrie Fisher) daughter, nor is she some secret love child of Luke Skywalker. If we presume that Episode IX won’t renege on what this film reveals, the biggest and most satisfying twist might be that Rey isn’t specifically tied to the characters of previous trilogies. Each set of three films is in some way about the Skywalker clan, from Anakin to Luke to his complex nephew Ben/Kylo. But Rey, established within the previous film as its heroine, is exactly what she’s always described herself as: someone who comes from “nowhere.” Though it’s possible that some fans may be let down by this surprising revelation, it fits in perfectly with the message Johnson sends all the way to the very last scene.

So many people have wondered what The Last Jedi means: is it Luke? (Yes.) Does that mean there’s no more hope for the Resistance? In some way, it might have felt natural not only for Rey to become the next Jedi, but for it to be due to surprising lineage. Knowing that Rey is both exceptionally gifted in the Force and also not a Skywalker or someone along those bloodlines emphasizes the true message of hope at the film’s end: the spirit of the Jedi extends beyond those like Luke, to anyone with a gift and the power to believe. It sounds sappy in this context, but within the film, it’s a bracing and powerful sentiment.

The reveal that Rey’s parents aren’t recognizable names in the greater Star Wars universe is also just generally exciting because it zigs where the series usually zags. For a franchise that’s set in a galaxy far, far away, these movies tend to revolve around a small group of characters who are connected in the same way. Now, though, we know that the new heroes of this third trilogy are forging their own path, not following their parents’ or grandparents’ footsteps. Rey, Finn (John Boyega), and Poe (Oscar Isaac) may idolize heroes like Luke and Leia, but that’s as far as their connection goes. 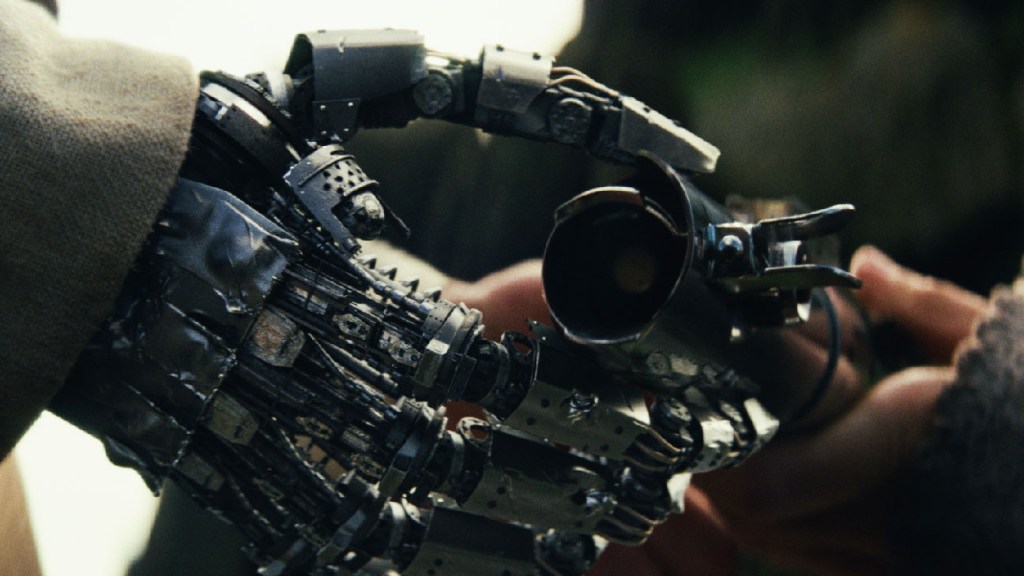 The last scene of The Last Jedi speaks to that same sense of the young moving beyond the path of the old. Instead of the film wrapping up as we watch our remaining heroes take the Millennium Falcon to a safe haven, Johnson cuts back to the stables on the planet of Canto Bight, where Finn and new character Rose (Kelly Marie Tran) visited earlier on. One of the young stable boys they encountered is play-acting some action-packed heroics, before we realize that he has some of the same powers that Rey has and is clearly waiting for his chance to join the Resistance. Like Rey, his backstory may be unremarkable. But his power may offer hope to many.

For a host of reasons, Star Wars: The Last Jedi is an immensely satisfying moviegoing experience. It’s funny, thrilling, romantic and often very surprising. Perhaps nowhere else in the film do the surprises become more rewarding than when Rey accepts that her parentage isn’t special. For the character, played so wonderfully by Daisy Ridley, it’s a heartbreaking moment. For us, it’s a shock that a character from humble backgrounds isn’t heavily connected to the Skywalker family. Rey isn’t someone’s long-lost kin, which makes her power all the more impressive. It’s the best choice for the character and the series.