“Well, this is terrifying,” filmmaker J.J. Abrams said to laughs Monday as he introduced Star Wars: The Rise of Skywalker to its first public audience. “People have reassured me I felt this way at the premiere of Force Awakens, but I think those people are liars.”

Abrams gave a nearly ten-minute speech in which he gave heartfelt thanks to Disney’s Bob Iger and Lucasfilm head Kathleen Kennedy — who stood by him on stage — as well as Steven Spielberg and Abrams’ wife, Katie McGrath, whom he noted gave tough, honest notes on the movie — emphasis on “tough.” Abrams then introduced his team, asking for a standing ovation for composer John Williams, whom he noted had scored the greatest movies of all time.

Before the film played, there was a small gaffe, with the announcer asking the audience to enjoy “The Return of Skywalker,” rather than The Rise of Skywalker. The premiere Monday at the Dolby Theatre came 42 years after the original Star Wars rolled into Grauman’s Chinese Theatre in May 1977, back before anyone knew the phenomenon George Lucas was unleashing on the world.

The blue carpet for the premiere was set up in a massive tent in the parking lot behind the El Capitan Theatre, and as the carpet opened, lines of regular stormtroopers came filing out, followed by stormtroopers with red armor. C3PO, R2D2 and BB-8 followed suite. Outside of the theater, a woman dressed as Princess Leia was collecting petitions for the late Carrie Fisher to be granted a star on the Hollywood Walk of Fame. The screening that followed took place at the nearby Dolby Theatre.

The Rise of Skywalker premiere was a chance for Hollywood to pay their respects to their favorite members of the Star Wars universe and vice versa. Journalist Ronan Farrow spent several minutes chatting up composer John Williams at the after party, while Adam Driver spent time hanging out with Spike Lee and Frances McDormand at Lee’s reserved table.

Lucasfilm chief Kennedy, flanked by her husband, producer Frank Marshall, was in good spirits at the party as she was deluged with well-wishers. It’s been a four-year,  sometimes arduous journey for the executive. She and Marshall huddled with Daisy Ridley, who earlier spoke for quite a while with Harrison Ford at his reserved table.

And, in a sign of the reshaped Disney empire, 20th Century Fox president Emma Watts attended the premiere and after party, as did Fox Searchlight president Steve Gilula, who also caught up with McDormand.

Harrison Ford, who played Han Solo in four films, was in good spirits at his reserved table, while The Mandalorian creator Jon Favreau, and Damon Lindelof also made it to the premiere.

Speaking to The Hollywood Reporter on the red carpet, Williams, who reprises the role of Lando Calrissian in Rise of Skywalker, said it was “very interesting” and “a lot of fun” to revisit the character of the iconic smuggler adding that when he got the call to come back he “jumped” at the chance.

Also on the carpet was Todd Fisher, brother of Carrie, who told THR he was “little afraid” to watch the film as he had been told it was very “emotional” and that he had trouble watching his sister in The Last Jedi:  “It’s one of those good news, bad news things. It’s great to see Carrie again, it’s like a home movie, it’s a great crescendo to this whole thing. It think it’s one of the best things she ever did. So I love what’s going on.” 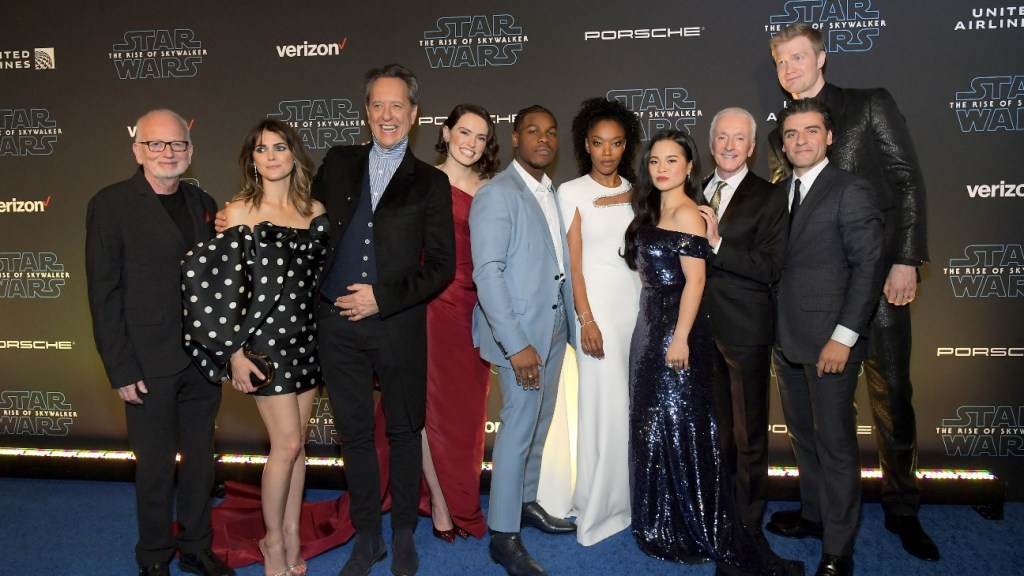 Said Disney CEO Bob Iger of coming to the end of the Skywalker saga: “It’s interesting because I know in some respects it’s bittersweet, but J.J. Abrams and his team created a very satisfying movie. Quite emotional, very exciting, but I think it’s satisfying and it will provide closure.” He added, “That said, it’s not the end of Star Wars stories, so on the one hand, it’s the end of nine chapters, or the three that we’ve been responsible for making, but in many respects it’s the beginning of stories coming from galaxies far, far away.”

Asked on the carpet whether he was surprised at the popularity of the “Baby Yoda” character in Disney+’s The Mandalorian, Iger responded,  “Well, look, the scale of the reaction is probably beyond my expectations by a wide margin. That said, the moment I laid eyes on the character, I had a strong feeling the character was going to connect with audiences. It’s just so cute, so interesting, so compelling, in many respects so familiar and yet so new.” 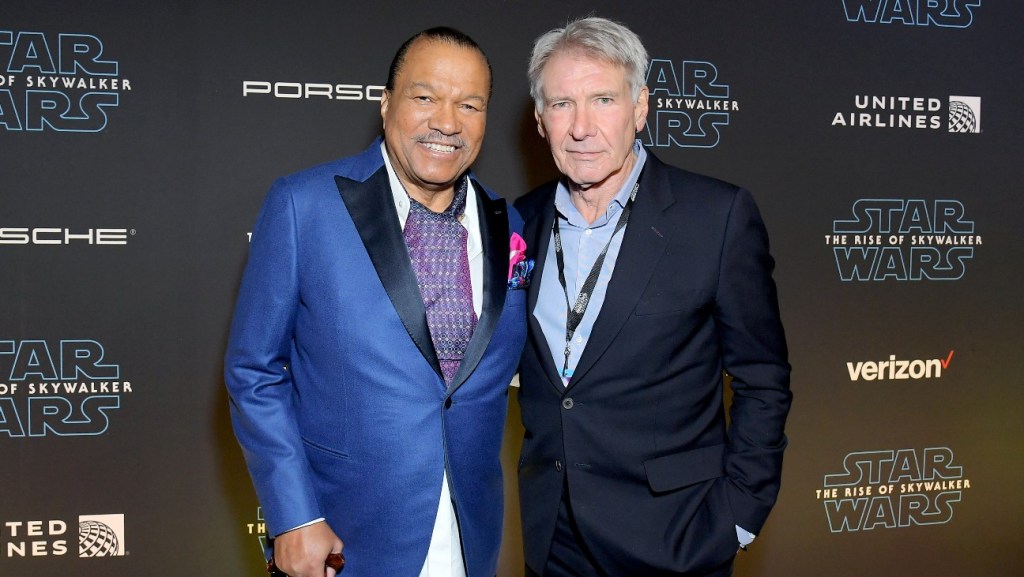 As for whether, in hindsight, Disney should have produced the much-in-demand Baby Yoda merchandise sooner, the CEO said he wouldn’t do anything differently. “We talked about it, and we wanted the reveal of that character — notice I’m not referring to it as ‘Baby Yoda’ — to be really special. And it was worth it,” said Iger.

Boyega, who plays Finn in the franchise, echoed the sentiments of many on the carpet, but didn’t elaborate on whether we had seen the last of his character: “It’s a goodbye for now. Saying goodbye to [Finn] was hard, especially the last day was bittersweet. I gave a good speech, exchanged gifts with the co-stars and, you know, you’re [then] released into the normal world.”

The British actor told THR that he was extremely thankful for the “great opportunity” to appear in Star Wars, adding that Finn was a “vital character that has been a stepping stone for my career, so I really appreciate being given this opportunity.”

The Rise of Skywalker premiere comes almost exactly four years after Abrams and Disney relaunched the Star Wars franchise by unveiling The Force Awakens at a giant premiere in Hollywood in December 2015.

—Pamela McClintock contributed to this story.