Since his introduction in 2015’s The Force Awakens, Poe Dameron’s (Oscar Isaac) quick wit, quips, loyalty and talent as a pilot have established him as one of the breakout characters from the new trilogy. In the first trailer for Star Wars: The Rise of Skywalker, Poe once again plays a big part, capering across the galaxy with Finn (John Boyega) and discovering the remains of what looks to be the second Death Star with his companions. But, ironically, one of the moments which doesn’t feature him has me thinking about the role Poe’s past could play in the events of the final chapter in the Skywalker Saga.

During Friday’s Episode IX panel at Star Wars Celebration in Chicago, J.J. Abrams shared a piece of concept art that showed the core characters on a forested, jungle-like planet while describing the “adventure” they would be going on together. The importance of this location was confirmed by a scene in the trailer where Leia (Carrie Fisher) and Rey (Daisy Ridley) embrace while Rey sheds a single tear. Both locales are heavy on greenery and recall a key location from the original trilogy that plays a major part in the backstory of everyone’s favorite cocky fly boy.

In 1977’s Star Wars: A New Hope, fans were introduced to a Rebel Base hidden in the shady jungle glades of Yavin 4, the fourth moon of the red gas giant planet known as Yavin (Prime). Given that the timeline of the galaxy far, far away is bifurcated by the climactic battle at the end of A New Hope. (it’s either BBY, Before the Battle of Yavin, or ABY), the planet and its satellites play a vital role in the Star Wars universe. But Yavin 4 also plays a vital role in Poe Dameron’s origin, though you would only know that if you read some very specific comics from the lead-up to The Force Awakens.

Shattered Empire: The Road to the Force Awakens was a four-issue miniseries by Greg Rucka, Marco Checchetto, Andres Mossa, and Joe Caramagna that was billed as a precursor to the then-eagerly awaited Star Wars: Episode VII. The books were set just after Return of the Jedi and introduced readers to Poe Dameron’s parents, Kes Dameron and Shara Bey, who were both a part of the Rebellion. The comics focused on Poe’s mother, a Rebel pilot, and a mission she undertook with none other than Luke Skywalker himself. 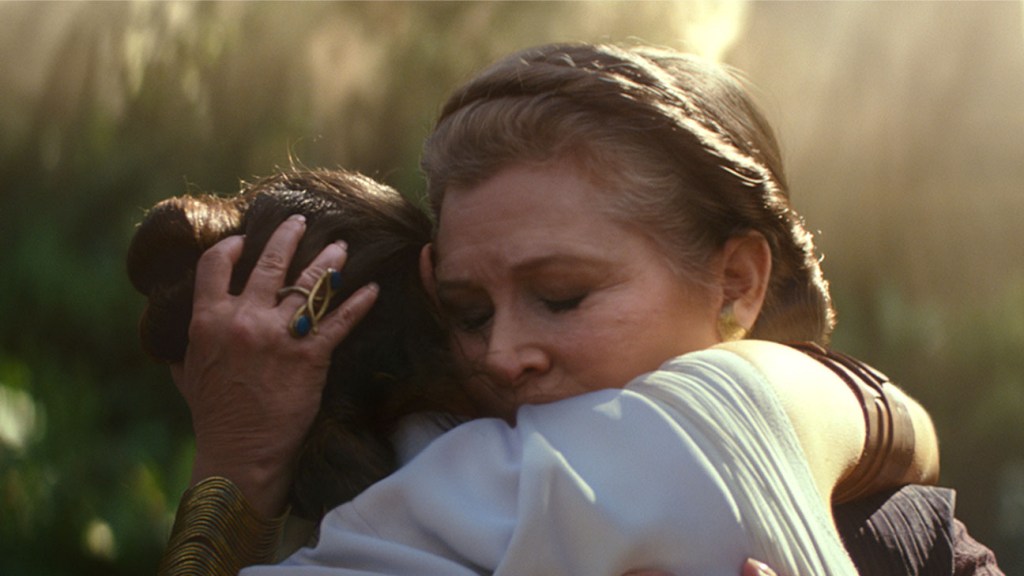 Obviously Poe having a connection to the Rebellion is a cool reveal, but it doesn’t implicitly imply that he has any link to the mystical Force. That is, until you discover what Bey and Skywalker’s mission actually was. In the fourth issue of the series, Bey is enlisted by R2D2 to act as Luke’s co-pilot on a vital trip to recover a mysterious artifact, two cuttings of a great tree that once grew in the Jedi Temple on Coruscant, introducing the idea of Force-sensitive plants into the core Star Wars canon.

Shara didn’t just save the trees, though. She was eventually given one by Luke Skywalker and planted it in her garden on Yavin 4, where Poe grew up playing alongside it. Before the film was released, this seemed like a small and perhaps throwaway moment, but as the sequel trilogy has continued, it has become clear that Poe plays a vital role in the future of the galaxy and it seems unlikely that Disney/Lucasfilm would seed this connection needlessly. The only question was just how it would come into play. But as the trailer hinted at a return to Yavin 4, this part of Poe’s story could also become a vital part of The Rise of Skywalker.

If the story centers on the team adventuring around the galaxy attempting to find ways to possibly defeat the Emperor, it would make sense that Poe would return home to his parents, who’d fought Palpatine and the Empire before. We know Poe values his mother — greatly, as the ring he wears around his neck belonged to her — and it wouldn’t be too much of a jump for his return to Yavin 4 to play as both a family reunion and reawakening. If Poe spent time around a Force tree, it’s totally within reason that he may have built a connection to the Force, especially as throughout Star Wars history, being a really good pilot has been a sign of Force sensitivity, with the skill playing a large part in Rey (Daisy Ridley), Luke (Mark Hamill), and Anakin’s (Hayden Christensen) lives.

Yavin 4 also has a personal connection to the actor who brings Poe Dameron to life, as Isaac has revealed that he was the one who suggested that the pilot should hail from the moon, as the original sequences were filmed in his home country of Guatemala. That real-life story means returning to the planet would have an extra layer of importance added to it, and Poe being a Force user could also fit into the narrative introduced at the end of The Last Jedi. Rian Johnson’s entry held a powerful message about anyone being able to wield the powers of the Force, and with the title of the new movie hinting at the rise of a potential new era, it makes sense that the new status quo would see more characters awakening to their connection with the energy source.

After all, if the Emperor is truly returned then it means that Light will rise to meet the Dark, and what could be better at beating the greatest evil that ever lived than an entirely new generation of Force users coming together to fight him, with characters both old and new discovering they too can harness the Force to bring balance to the galaxy and the wider universe.

Does 'Star Wars: The Rise of Skywalker' Title Refer to Rey?