The Rise of Skywalker is officially upon us, thanks to a little help from Stephen Colbert.

After a year’s worth of speculation, emcee Colbert, Lucasfilm head Kathleen Kennedy and filmmaker J.J. Abrams unveiled the first teaser trailer for Star Wars: The Rise of Skywalker to a packed (and raucous) crowd at Star Wars Celebration in Chicago on Friday.

Among the big reveals is that Emperor Palpatine, the villain played by Ian McDiarmid in the previous two trilogies and thought to be dead, is back — as his laugh is heard at the end of the teaser. McDiarmid also walked out onstage after the trailer and ordered it to be replayed.

Earlier in the panel, Abrams made what might have been a reference to Palpatine, though he didn’t name him.

“This movie, in addition to being the end of three trilogies, it also has to work as its own movie,” said Abrams. “It’s about this new generation and what they’ve inherited, the light and the dark, and asking the question as they face the greatest evil, are they prepared? Are they ready?”

The late Carrie Fisher will appear as Leia in the film, with Abrams utilizing unused footage they shot together during 2015’s The Force Awakens. Colbert asked how they filled the void left by the star’s 2016 death.

“We couldn’t,” said Abrams. “You don’t recast that part and you don’t suddenly have her disappear. The weird miracle of having a number of scenes from Force Awakens that had got unused, looking at those scenes and starting to understand that there was actually a way to use those scenes and continue her story, so that it would be her. The idea of having a CG character was off the table. … We said, ‘What if we could write scenes about her so it’s her performance?'”

He also noted that Fisher appears in scenes with the late actor’s daughter, Billie Lourd.

“Every day it hits me that she’s not here. It’s so surreal because we are working with her still, if that makes sense. She’s in scenes. She’s alive in scenes,” said Abrams.

Colbert asked if this film takes place immediately after the events of 2017’s Star Wars: The Last Jedi, and Abrams confirmed it does not.

“Some time has gone by,” Abrams said. “This is an adventure that the group goes on together. … One of the great things about the movie, getting to work on it, was the dynamic between the characters. They are just the most wonderful together.”

Billy Dee Williams returns as Lando Calrissian for the first time since 1983’s Return of the Jedi. Colbert asked him what it was like to return to the character after decades away from him. 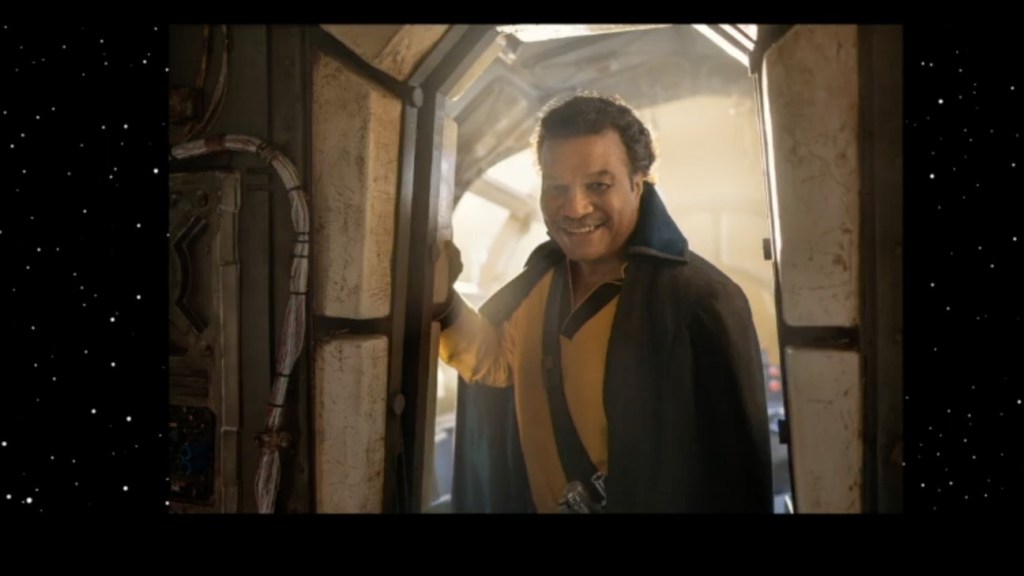 Abrams recalled Williams’ first day on set, noting it was a big scene with a lot of extras.

“Billy came on to the set … and it just went silent. Everyone was watching. It was so sweet to see the reaction from the people who were working on the movie. Honestly, it was an emotional thing,” said Abrams.

Kennedy noted that Abrams was a little starstruck working with the Star Wars vet for the first time.

“The thing I love with J.J. is he’ll turn to me and go, ‘Oh my God! Can you believe this is happening?'” said Kennedy.

Franchise newcomer Naomi Ackie revealed that her character is named Jana (the spelling is unclear at this point).

“The original group are going on this epic, epic adventure together, and I’m so excited about where Jana crosses paths with them,” Ackie said. “It’s wicked.”

Colbert brought up rumors that she is playing Lando’s daughter.

“Listen. Lando is a very charming man, so he could have children all over the universe,” she said with a laugh. “That’s all I’m saying.” 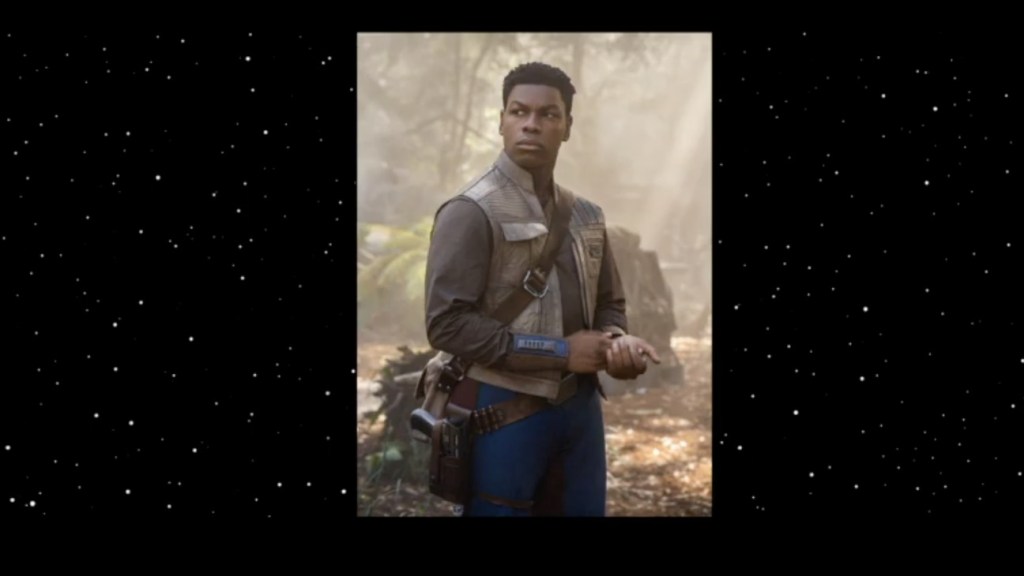 Colbert noted that John Boyega’s Finn has fought Phasma (Gwendoline Christie) in the previous two films. She appeared to die in The Last Jedi, but is there a chance of a rematch, or does Finn at least get closure after the abuse suffered at the hands of his former commander?

“Emotional closure, sure. I don’t think about her at night and stuff. But I definitely feel there’s some form of closure within whom he identifies with. Who is family? What is love? What is friendship?” Boyega said. “But Phasma? She dead.”

Colbert brought up a love triangle between Finn and Rey (Daisy Ridley) and Rose (Kelly Marie Tran) that seemed to be brewing in The Last Jedi.

“Add Poe” noted Boyega, referencing fans who have called for Oscar Isaac’s character to have a romance with Finn. “It’s a love pentagon, man.”

Added Boyega, “Finn is single and willing to mingle.” 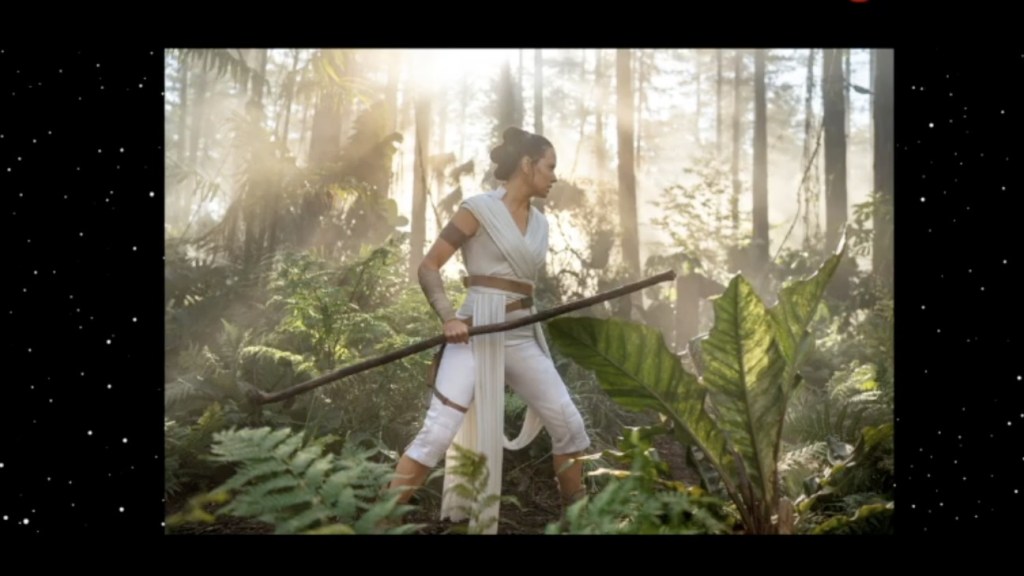 In The Last Jedi, filmmaker Rian Johnson introduced new Force powers, such as astral projection. When Colbert asked if there were any similar additions to the Force in Rise of Skywalker, Abrams gave a vague answer.

“There are some extraordinary things the character and Daisy did in this movie,” said Abrams. “Some of the stuff that happened was possible because we had the most incredible stunt coordinator.”

Colbert also asked about the meme-able moment in which Adam Driver’s Kylo Ren appeared shirtless in The Last Jedi.

“I think I can confirm there are no more semi-naked Kylos, unfortunately,” Ridley said of Episode IX.

Added Isaac, jokingly: “Only full. We had to take it up a notch.”

Colbert eventually added, to groans and laughs, “tell me about his lightsaber.”

Turning to more family-friendly conversation, Chewbacca actor Joonas Suotamo, who took over the role from Peter Mayhew, noted that he got to bring his young son to set, and showed off a photo.

“He’s not afraid of Chewbacca. He had a good time with this cast, and especially Daisy,” said Suotamo.

Abrams also revealed the adorable BB-8 has a new friend, a droid named D-0 who rolled onto the stage.

Rise of Skywalker, also known as Episode IX, will be the final Star Wars film for the foreseeable future as Disney is emphasizing its upcoming streaming service Disney+, debuting in November, as the home of Star Wars stories (for now). It has Jon Favreau’s The Mandalorian and an untitled Rogue One prequel starring Diego Luna in the works.

The Rise of Skywalker began shooting in August 2018 and wrapped in February. It is going to be the final chapter of the nine-movie Skywalker Saga, which began with 1977’s Star Wars.

The panel was widely anticipated as fans have been clamoring for the trailer and the title reveal. Waiting for a Star Wars title has become a pastime among fans in recent years. Star Wars: The Last Jedi revealed its title in January 2017, nearly a year before it hit theaters, while the Han Solo prequel was titled Solo: A Star Wars Story in October 2017, seven months before it opened.

Why 'Star Wars: The Rise of Skywalker' Needed to Bring Back the Emperor

Why 'Star Wars: The Rise of Skywalker' Needed to Bring Back the Emperor